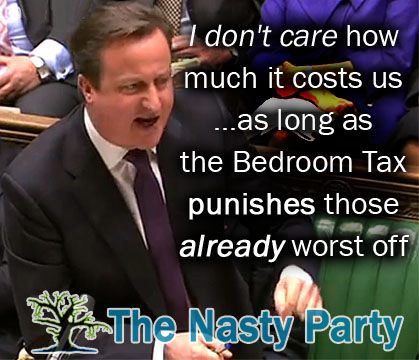 Cabinet reshuffle day is considered the perfect opportunity for government departments to bury bad news. And it’s surely too much of a coincidence that on this of all days, the Department for Work and Pensions has published its much-anticipated 163-page interim report of the impact of the Bedroom Tax. One of the most striking and damning findings is that disabled people are being unfairly and disproportionately affected, with seven out of ten households adversely affected having householders that are caring for someone with a disability.

The report also found difficulties among these 370,000 or so households in successfully claiming discretionary housing payments.The payments were intended to alleviate the effect of the policy among vulnerable groups.  This policy is causing devastating hardship for the most vulnerable citizens.

The TUC has accused the government of yesterday “shamefully” sneaking out a report on the bedroom tax that shows many affected tenants are being pushed into arrears.

TUC general secretary Frances O’Grady said: “The government has shamefully sneaked out a report, under the cover of the reshuffle, that lays bare the damage wreaked by the bedroom tax. It shows how people affected by the tax are simply not able to move and instead are being pushed into rent arrears. As a result, many could end up losing their homes altogether.

“Government claims that the bedroom tax will free up under-occupied housing stock are farcical. The number of households affected by the tax during the first five months of its operation has fallen by less than five per cent.

“The bedroom tax is widely feared by tenants and the verdict from landlords and housing support workers is equally damning. Fewer than one in ten landlords say that government help for struggling tenants is working well and local authorities report that it is making it more difficult for them to house homeless single people.

“The bedroom tax is one of the most pointlessly cruel welfare policies instigated by a government that remains determined to take away the safety net that so many rely upon. It is shameful that ministers are now trying to hush up the damage it’s causing.”

Evaluation of Removal of the Spare Room Subsidy – Interim report

Government wrongs, Human Rights and a call for evidence from Raquel Rolnik

Many thanks to Robert Livingstone for his excellent illustrations of Tory lies, cruelty, and repertoire of illegal policies and practices.