Editorship of The Spectator has often been a step on the ladder to high office in the Conservative Party – past editors include Iain Macleod, Ian Gilmour and Nigel Lawson, all of whom became cabinet members – or a springboard for a greater role in public affairs, as with Boris Johnson (1999 to 2005), the Conservative Mayor of London. The Spectator is a weekly British and staunchly Conservative magazine.

So when we see articles from right-wing commentators that are extensively critical of a Conservative-led government, indicating deceit and lying to the public and highlighting the sheer hypocrisy of Cameron’s ideologically-driven policies, it’s worth paying some attention to it. Especially when those articles echo some of our own criticisms.

This week, Fraser Nelson wrote  “the Prime Minster and his Chancellor are scurrying around the country misleading people. Never mind the national debt, the deficit has not been cut in half over the course of this parliament.”

We also know that the national debt has increased so much in just four years, that not only does it surpass that of the last government of thirteen years, it surpasses the debt of EVERY Labour government combined, since 1900. That’s no mean feat for the Conservatives, given their self-declared raison d’être is “paying down Britain’s debts.” Cameron has been officially rebuked twice by the Office for National Statistics (ONS) for his grandiose, deceitful claims of doing that.

Let’s not forget Osborne’s promise of preserving Britain’s AAA credit rating, Fitch and Moody’s agencies stripped the UK of its triple A credit rating in a withering assessment of its economic outlook last year

Despite Cameron’s persistent claims that the Tory “long term economic plan” is working and that there has been the “largest fall in unemployment since records began,”  the Treasury is surprisingly at an all time low on income tax revenues. It was 25 billion short of the predicted amount. If it wasn’t for the money collected through the recent bank fines (£1.1 billion) because of the rigging of foreign exchange markets and through the Tory hike on VAT (which affects those out of work proportionally the most), Osborne would have been well and truly left without any room for manoeuvre whatsoever in the package of lies that was his recent autumn budget statement.

This is a government that treats the public with contempt and delivers nothing but lies. Any party that can claim with a straight face that: “As part of our long-term economic plan, we’ve capped benefits to reward work” whilst presiding over the biggest drop in wages of all the  G20 countries and a cost of living crisis that is leaving many people unable to meet even their most basic survival needs doesn’t care about democratic dialogue with the electorate.

And of course there is the basic absurdity of the claim – that cutting benefits for those out of work will somehow raise wages for those in work.  The truth is that Conservatives like to keep people in a state of desperation so that they may be forced to take any work, no matter how unfair and low the pay is and no matter how poor the working conditions. Tories serve only the interests of the majority of their donors – private companies – who want to simply profit from cheap labour.

Most who read my posts would probably agree that Tory ideology is all about handouts to the wealthy that are funded by the poor. It’s the very wealthy that exemplify the something for nothing culture, whilst the poorest, who have paid for the rapidly diminishing public services and welfare through taxes have been transformed into a nothing for something culture by a government that truly believes there is merit to be found in a State that extends Social Darwinist principles, generates massive inequality, whilst retracting the gains of our post-war settlement. The Tories have pulled the safety net, leaving the poorest tight-roping over a chasmic income gap, and ultimately, they have been hung out to dry up there.

Furthermore, most would understand that critically, this fundamental Tory belief that the wealthy deserve rewarding with more money via tax “breaks” whilst the poorest deserve punishment by having their money taken away via cuts not only leads to an extremely unequal and unfair society, it is ultimately very damaging for the economy, a fact most recently confirmed by the Organisation for Economic Co-operation and Development (OECD).

Yesterday in the Spectator, Alex Massie pointed to this fundamental ideologically-scripted Tory policy of economical discrimination and said it was the fatal contradiction at the heart of the Tory message. The message is: there is no money, except for people we like.

He goes on to say:

“The Tories are entering the campaign with a message that contradicts itself. Not at the margin or in some trivial sense but at the heart of the matter and on the stuff that really matters.

Because, you see, the Conservatives are running a campaign that says there is no money for public spending but there is money for tax cuts. One of these things can be true; they cannot both be.

The income tax cut for millionaires was a terrible idea when it was first announced and remains, politically-speaking, a terrible idea now. If anything, in fact, it looks worse now than it did at the time. Tax cuts for our chums; welfare cuts for you. That’s not a good look.

Now, however, Osborne promises huge public spending cuts of a depth and severity unseen in this parliament.”

When the right-wing press are cataloging Conservative failures and lies, too, you know that’s the sound of a turning tide.

Related: “We are raising more money for the rich.” 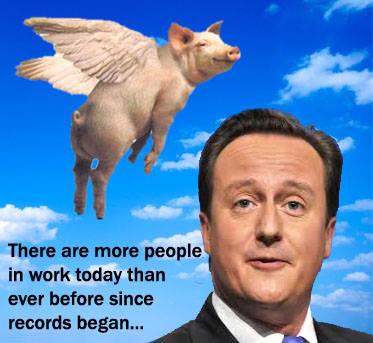 21 thoughts on “The inherent contradictions of Conservatism”