David Miranda, partner of Glenn Greenwald, the Guardian interviewer of the whistleblower Edward Snowden, was held for 9 hours at Heathrow Airport and questioned under the Terrorism Act. Officials confiscated electronics equipment including his mobile phone, laptop, camera, memory sticks, DVDs and games consoles.

This was a profound attack on press freedoms and the news gathering process, and Greenwald said:

“To detain my partner for a full nine hours while denying him a lawyer, and then seize large amounts of his possessions, is clearly intended to send a message of intimidation.”

Absolutely. Since when was investigative journalism a crime?

Since it flies in the face of an increasingly authoritarian and psychocratic government that exercises rigid control over public access to information, and manipulates public perceptions and behaviours.

Sure, it sounds like the basis of a conspiracy theory doesn’t it?

The following article was originally posted on The Intercept site by Glenn Greenwald and Andrew Fishman.  Reproduced here with thanks.

The spy unit responsible for some of the United Kingdom’s most controversial tactics of surveillance, online propaganda and deceit focuses extensively on traditional law enforcement and domestic activities — even though officials typically justify its activities by emphasizing foreign intelligence and counterterrorism operations.

Though its existence was secret until last year, JTRIG quickly developed a distinctive profile in the public understanding, after documents from NSA whistleblower Edward Snowden revealed that the unit had engaged in “dirty tricks” like deploying sexual “honey traps” designed to discredit targets, launching denial-of-service attacks to shut down Internet chat rooms, pushing veiled propaganda onto social networks and generally warping discourse online.

Early official claims attempted to create the impression that JTRIG’s activities focused on international targets in places like Iran, Afghanistan and Argentina. The closest the group seemed to get to home was in its targeting of transnational “hacktivist” group Anonymous.

While some of the unit’s activities are focused on the claimed areas, JTRIG also appears to be intimately involved in traditional law enforcement areas and U.K.-specific activity, as previously unpublished documents demonstrate. An August 2009 JTRIG memo entitled “Operational Highlights” boasts of “GCHQ’s first serious crime effects operation” against a website that was identifying police informants and members of a witness protection program. Another operation investigated an Internet forum allegedly “used to facilitate and execute online fraud.” The document also describes GCHQ advice provided “to assist the UK negotiating team on climate change.”

Particularly revealing is a fascinating 42-page document from 2011 detailing JTRIG’s activities. It provides the most comprehensive and sweeping insight to date into the scope of this unit’s extreme methods. Entitled “Behavioral Science Support for JTRIG’s Effects and Online HUMINT [Human Intelligence] Operations,” it describes the types of targets on which the unit focuses, the psychological and behavioral research it commissions and exploits, and its future organizational aspirations. It is authored by a psychologist, Mandeep K. Dhami.

Among other things, the document lays out the tactics the agency uses to manipulate public opinion, its scientific and psychological research into how human thinking and behavior can be influenced, and the broad range of targets that are traditionally the province of law enforcement rather than intelligence agencies.

It touts the fact that the unit “may cover all areas of the globe.” Specifically, “operations are currently targeted at” numerous countries and regions including Argentina, Eastern Europe and the U.K.

Many GCHQ documents describing the “missions” of the “customers” for which it works make clear that the agency has a wide mandate far beyond national security, including providing help on intelligence to the Bank of England, to the Department for Children, Schools and Families on reporting of “radicalization,” to various departments on agriculture and whaling activities, to government financial divisions to enable good investment decisions, to police agencies to track suspected “boiler room fraud,” and to law enforcement agencies to improve “civil and family justice.”

Previous reporting on the spy agency established its focus on what it regards as political radicalism. Beyond JTRIG’s targeting of Anonymous, other parts of GCHQ targeted political activists deemed to be “radical,” even monitoring the visits of people to the WikiLeaks website. GCHQ also stated in one internal memo that it studied and hacked popular software programs to “enable police operations” and gave two examples of cracking decryption software on behalf of the National Technical Assistance Centre, one “a high profile police case” and the other a child abuse investigation.

The JTRIG unit of GCHQ is so notable because of its extensive use of propaganda methods and other online tactics of deceit and manipulation. The 2011 report on the organization’s operations, published today, summarizes just some of those tactics:

Throughout this report, JTRIG’s heavy reliance on its use of behavioral science research (such as psychology) is emphasized as critical to its operations. That includes detailed discussions of how to foster “obedience” and “conformity”: 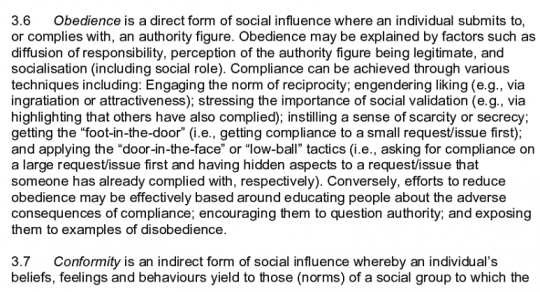 In response to inquiries, GCHQ refused to provide on-the-record responses beyond its boilerplate claim that all its activities are lawful.

Documents published with this article: