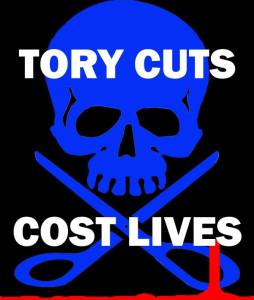 I’ve written more than one lengthy critique of Tory notions of what passes for “research” methods, and often criticised Conservative refusals to accept the research findings of academics regarding, for example, established links between the Work Capability Assessment, increased suicide and mortality, the link between sanctions and increased mortality. The Tory plea for the universal and unqualified dismissal of whatever they deem to be criticism of their policies is often based on the claim that “no causal link has been established.”

As I have pointed out previously, whilst correlation certainly isn’t quite the same thing as cause and effect, it quite often strongly hints at a causal link, and as such, warrants further investigation.

It is inaccurate to say that correlation doesn’t imply causation. It quite often does. Correlation means that an association has been established. The tobacco industry, for example, has historically relied on exactly the same dismissal of correlational evidence to reject the established link between tobacco and lung cancer.

The standard process of research doesn’t entail, at any point, a flat political denial that there is any relationship of significance to concern ourselves with, nor does it involve a systematic and deliberate withholding of relevant data, attempts at censoring democratic dialogue, and a point blank refusal to investigate further. Furthermore, the government claims that there is “no evidence of a causal link ” is unverified. There is no evidence to support government claims that there isn’t such a link, either. In fact empirical evidence strongly refutes the Conservative’s persistent claims of no association between the welfare cuts and an increase in suicide and mortality.

I’ve observed more than once that when it comes to government claims, the same methodological rigour that they advocate for others isn’t applied. Indeed, many policies have clearly been directed by ideology and traditional Tory prejudices, rather than being founded on valid research and empirical evidence. The fact that no cumulative impact assessment has been carried out with regard to the welfare “reforms” indicates a government that is not interested in accountability, and examining the potential negative outcomes of policy-making. Policies are supposed to be about meeting public needs and not about inflicting Conservative dogma and old prejudices in the form of financial punishment on previously protected social groups.

We need to ask why the government has so persistently refused to undertake cumulative impact assessments and conduct open, publicly accessible research into their austerity policies, the impact they are having and the associated deaths and suicides.

Without such research, it isn’t appropriate or legitimate to deny a causal link between what are, after all, extremely punitive, targeted, class-contingent policies and an increase in premature mortality rates.

Government policies are expressed political intentions regarding how our society is organised and governed. They have calculated social and economic aims and consequences. Political denial of responsibility is repressive, it sidesteps democratic accountability and stifles essential debate and obscures evidence. Denial of causality does not reduce the probability of it, especially in cases where a correlation has been well-established and evidenced. Nor does attempting to hide the evidence.

Being civilised, holding values of decency and having legitimate concerns about the welfare and wellbeing of sick and disabled citizens have all been depreciated as mere matters of “subjective interpretation” and not as worthy subjects of political, rational or objective discussion. This isn’t a government prepared to engage in a democratic dialogue with citizens, it is one intent on imposing authoritarianism.

The following article titled “Suicides of benefit claimants reveal DWP flaws, says inquiry” was written by Patrick Butler and John Pring, for The Guardian on Friday 13th May 2016 22.59 UTC

A series of secret internal inquiries into the deaths of people claiming social security reveal that ministers were repeatedly warned of shortcomings in the treatment of vulnerable claimants facing potentially traumatic cuts to their benefits entitlements.

The conclusions are contained in 49 Department for Work and Pensions (DWP) inquiry reports finally released to campaigners on Friday after a two-year Freedom of Information (FOI) battle. Some 40 of the reports followed a suicide. In 10 cases, the claimant had had their benefits sanctioned.

Although the heavily redacted reports do not draw a direct link between the death of a claimant and problems caused by their dealings with the benefits system, they highlight widespread flaws in the handling by DWP officials of claims by people with mental illness or learning difficulty.

The reports, called “peer reviews,” appear to challenge blanket claims by ministers that there is no connection between government welfare reform policies and the deaths of vulnerable claimants.

Several suggest that claimants who died may not have received adequate support from DWP staff handling their benefit claims. At least five of the reports call for major reviews or substantial changes to procedures on identifying and supporting vulnerable claimants.

Many of them centre on the much-criticised Work Capability Assessment (WCA), the test used to assess whether claimants are fit for work. Campaigners argue the tests are flawed and linked to health relapses, depression, self-harm, and suicides.

Activists have linked the WCA to a string of tragic deaths – including poet Paul Reekie, former sheep farmer Nick Barker and ex-security guard Brian McArdle – all of whom died after being found “fit for work” and told by the DWP that they would lose their out-of-work disability benefits.

Peer reviews are triggered when a claimant death is “associated with a DWP activity”. The reports released on Friday were drawn up between February 2012 and August 2014, when an FOI request was originally submitted.

One report warns that vulnerable claimants risked being overlooked by DWP officials, with potentially harmful consequences, because staff resources were stretched by a ministerial decision to push ahead with the speedy re-assessment of hundreds of thousands of incapacity benefit claimants.

It says: “The risk associated with disregarding the possibility that some of these claimants need more support or a different form of engagement is that we fail to recognise more cases like [name redacted] with consequent potential impact on the claimant.”

The report adds: “We need to ask whether or not in the context of a fast-moving environment of high [claimant re-assessment] volumes and anticipated levels of performance, the current process requires, encourages and supports … colleagues to independently and systematically consider claimant vulnerability.”

Another report suggests that while official written policy demanded vulnerable claimants to be treated appropriately this was not implemented in practice. It says: “This case may highlight a dislocation between policy intent and what actually happens to claimants who are vulnerable.”

Ministers initially denied back in 2014 that they held any records on people whose deaths may have been linked to benefits system. Although they subsequently admitted that so-called “peer-review” investigations had been carried out since 2012, they argued social security laws prevented them from publishing them.

A DWP spokesman said it would be wrong to link benefit claims with deaths. “Any suicide is a tragedy and the reasons for them are complex, however it would be inaccurate and misleading to link it solely to a person’s benefit claim.”

They added that guidance was provided to staff on how best to support vulnerable claimants. Ministers were not routinely shown the reviews, which were undertaken internally help staff to deal with complex and challenging benefit cases.

However, they were unable to say whether ministers or senior officials had acted on any of the recommendations contained in the 49 reviews.

Disability News Service, a specialist press agency which submitted the original FOI request to obtain the reports, asked the Office of the Information Commissioner to review the DWP decision. The ICO ruled in favour of the DWP in July 2014, but a subsequent appeal was upheld in March and ministers ordered to publish the reports.

Officials have removed from the reports any references to the specific events that triggered an investigation, as well as dates, names of claimants or staff and locations. Several of the inquiry reports have been stripped of almost all data.

But a number retain entries under the heading “Lessons learned”. Collectively these show that investigators examining the links between a claimant’s death and their treatment by local DWP officials uncovered persistent problems.

They found frontline officials were often unable to identify potentially vulnerable claimants, failed to deal sensitively or appropriately with them, or anticipated problems they may have negotiating their way around the welfare bureaucracy.

Investigators found, variously, that communication between officials and vulnerable claimants was often poor, that practice guidelines were not followed, and that benefits staff often rigidly adhered to the rulebook rather than using “common sense” in their dealings with claimants.

In two instances, investigators reported that it was difficult to carry out a proper inquiry because DWP records had been purged, or not kept properly. In another instance the investigator concluded that officals precedural actions were followed correctly and could not have prevented the death of the claimant.

Other peer review findings include:

• Local DWP branch officials should be given awareness training to deal with “customers who made suicide/self harm declarations”, one report urges. It concludes: “In learning from this experience it is clear there is work to do”.

• In one local office staff failed to provide adequate support for vulnerable claimants, according to a report. It says: “It is clear that we had several opportunities to identify and address the errors made over the duration of this claim, but we neglected to do so”.

• DWP staff who decide on whether to award or disallow disability benefit claims should always consider the claimants’ full historical case files and medical history, a report concludes, to “minimise the risk of withdrawing benefit inappropriately and placing a vulnerable claimant at risk”.

It is understood nine similar DWP peer reviews have since been undertaken since August 2014 and are subject to further FOI requests.

Sign the petition asking the government to examine the DWP, ATOS & Maximus’s culpability for deaths of benefit claimants

“There’s been a marked increase in the number of deaths & suicides of claimants recently found “fit for work” by work capability assessments, possibly implying those benefits entitlements were removed hastily and that the DWP, ATOS & Maximus failed in its duty of care to vulnerable benefit claimants.”