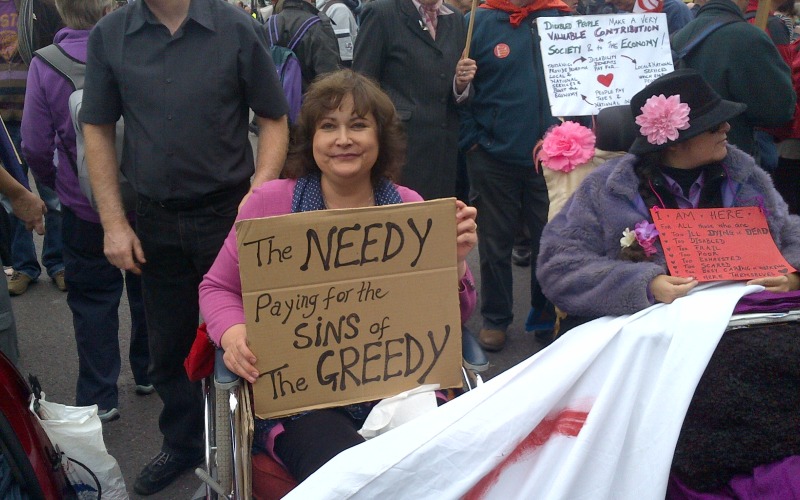 It’s estimated that around 160,000 disabled people will be stripped of their entitlement to support for the additional costs they face because of their disability after the government shifted the goalposts to deal with upper tribunal legal rulings, according to the Labour Party.

Debbie Abrahams, shadow work and pensions secretary, said: “Instead of listening to the court’s criticisms of personal independence payment assessments and correcting these injustices, the government has instead decided to undermine the legal basis of the rulings.

This is an unprecedented attempt to subvert an independent tribunal judgment by a government with contempt for judicial process.

By shifting the goalposts, the Tory government will strip entitlements from over 160,000 disabled people, money which the courts believe is rightfully theirs.

This is a step too far, even for this Tory government. Labour will stand with disabled people, who have already borne the brunt of seven years of austerity, in fighting this injustice.”

Labour opposes the reform and will also seek to block the statutory instrument in the House of Lords and the House of Commons.

The government will have used a statutory instrument that amends the Welfare Reform Act 2012. However, statutory instruments are generally used for non-controversial policy changes, and changes that don’t require much parliamentary scrutiny and debate. That clearly is not the case for the Conservative’s contentious Personal Independence Payment regulations, that attempt to overturn court rulings that are meant to be independent of government influence.

The move follows the recent undemocratic announcement by the government that they will be tightening the criteria for claimants of Personal Independence Payments (PIP) which will see people with serious illnesses such as diabetes, epilepsy and a wide range of mental illnesses left without support.

The purpose of Upper Tribunals

The government has introduced the restrictive regulations after losing two cases at tribunals, showing an utter contempt for the UK judiciary system. However, the UK tribunal system is part of the national system of administrative justice.

Administrative law is the body of law that governs the activities of administrative agencies of government. It is designed to independently review the decisions of governments, and as such, it provides protection and promotion of fundamental rights and freedoms for citizens.

The Upper Tribunal is a superior court of record, giving it equivalent status to the High Court and it can both set precedents and can enforce its decisions (and those of the First-tier Tribunal) without the need to ask the High Court or the Court of Session to intervene. It is also the first (and only) tribunal to have the power of judicial review. (The Conservatives have a historical dislike of judicial review. See for example: The real “constitutional crisis” is Chris Grayling’s despotic tendencies and his undermining of the Rule of Law.)

The Tribunals, Courts and Enforcement Act 2007 created a new unified structure for tribunals and recognises legally qualified members of tribunals as members of the judiciary of the United Kingdom who are guaranteed continued judicial independence. This means that the judiciary is kept discrete from other branches of government. That is so that courts are not subjected to improper influence from the other branches of government, or from private or partisan interests.

Judicial Independence is vital and important to the idea of separation of powers. The intent behind this concept is to prevent the concentration of political power and provide for checks and balances. It has been significantly influenced by judicial independence principles developed by international human rights constitutional documents. in the application of the European Convention on Human Rights in British law through the Human Rights Act 1998, which came into force in the UK in 2000.

The government’s new regulations are a particularly autocratic move, aimed at simply overturning two legal rulings that the government did not like, partly because their zealotry concerning their anti-welfarism and “small state” neoliberal ideology has been challenged. The regulations were ushered in and imposed so that they would not be subjected to parliamentary scrutiny and debate or democratic dialogue with disabled people or groups and organisations that support and advocate for those with disability.

“The first judgement held that needing support to take medication and monitor a health condition should be scored in the same way as needing support to manage therapy, like dialysis, undertaken at home. Until this ruling, the assessment made a distinction between these two groups, on the basis that people who need support to manage therapy of this kind are likely to have a higher level of need, and therefore face higher costs.

The second held that someone who cannot make a journey without assistance due to psychological distress should be scored in the same way as a person who needs assistance because they have difficulties navigating. By way of example, the first group might include some people with isolated social phobia or anxiety, whereas the second group might include some people who are blind. Until this ruling, the assessment made a distinction between these two groups, on the basis that people who cannot navigate, due to a visual or cognitive impairment, are likely to have a higher level of need, and therefore face higher costs.”

“The government is using its recent losses in court as an excuse to severely restrict disability benefits. Rather than listening to the ruling they are using it to make matters worse for disabled people – that is utterly outrageous.

What makes things even worse is that they have sneaked this announcement out under the cover of by-elections. These decisions impact the lives of vulnerable people, Liberal Democrats will not allow the Conservatives to get away with treating people with disabilities with such total contempt.”

The Liberal Democrats contributed to scuppering the government’s plans to restrict tax credits back in October 2015.

Personally, I welcome any collaborative effort to challenge the Conservative’s draconian policies which deny people the help and support that they need.