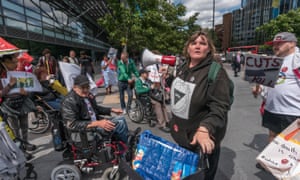 Last year I wrote an article about how the social security system in the UK has been re-structured around “ordeals”, which were introduced by the Conservative government in order to discipline and “disincentivise” citizens from claiming welfare support, by undermining any sense of security people may have of fulfiling their most basic needs.  Welfare support is extremely conditional and precarious. Ordeals are intrinsic to a system of punishment that the draconian Conservatives claim will “change the behaviours” of underpaid, unemployed and disabled people. By creating a hostile environment, the government are somehow claiming that it’s possible to simply punish people out of poverty.

“The British public have reacted to “a sense of betrayal of that so-called British value of fairness” (The hostile environment? Britain’s disabled people live there too, the guardian.com, 26 April). This “sense of betrayal” was only possible because the national press reported the plight of the Windrush scandal, but this is not always the case. Some of the press were happy to promote the exaggerated claims of the Department for Work and Pensions (DWP) which, during five years of coalition government, knowingly misled the public regarding “fake” claimants of disability benefit. Coincidentally, disability hate crimes increased by 213% during the coalition’s term in office.

Influenced by a US healthcare insurance “consultant”, who funded DWP-commissioned research used to justify welfare reforms, the work capability assessment (WCA) adopted the bio-psychosocial model of assessment which has failed all academic scrutiny. The WCA is used by the DWP to resist access to the employment and support allowance (ESA) sickness and disability benefit, which is the financial equivalent of jobseeker’s allowance, so there is no financial incentive when claiming ESA.”

This DWP assessment totally disregards diagnosis, prognosis, past medical history and all medical opinion. Deaths of genuine claimants were always inevitable. There is a reason why the DWP has refused to publish updated ESA mortality totals since February 2014, as suicides linked to the ESA assessment climb. It’s time for this ideological DWP tyranny to end, and for the national press to stop disregarding another national atrocity impacting on disabled people.”

The letter was signed by: