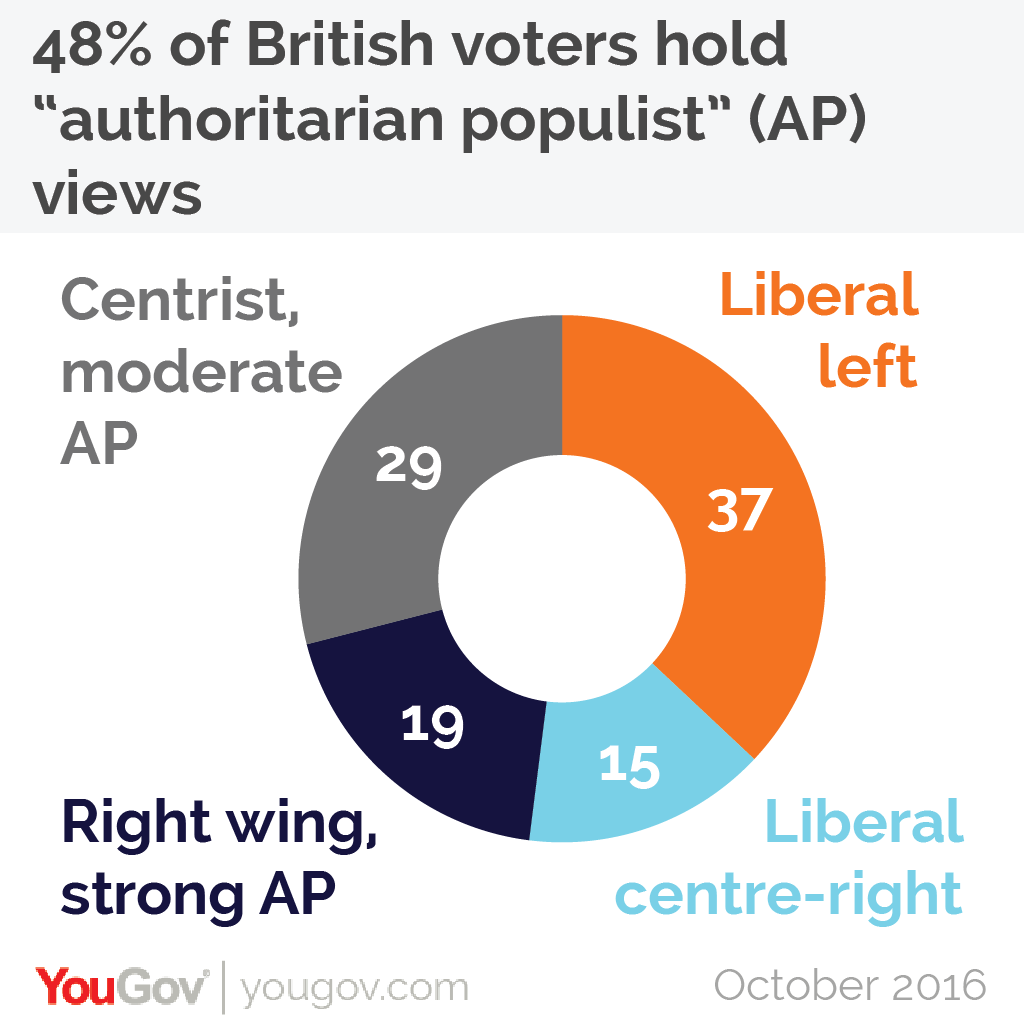 Interesting that this YouGov study identifies a proportion of the so-called centrist “moderates” as authoritarian populists, too. It’s something I’ve always suspected, making this group the real extremists within the Labour party. It does explain a lot, and I’d bet my sun hat that those “moderates” are also neoliberals, sharing a significant patch of common ground with the Tories.

Media euphemisms have obscured the truth for almost a decade: the Tories are authoritarians.

The BBC report that Boris Johnson “has no respect for the norms of democratic policy” and that he “misled” the queen”.

The word for that is authoritarianism.

In the 1980s, the use of a new academic term became common among some political scientists when describing the neoliberal politics of Ronald Reagan and Margaret Thatcher: “authoritarian populism”. This term was based on the theory that they and their supporters shared a core set of attitudes: cynicism over human rights, anti-immigration, an anti-EU position in Britain, and favouring a strong emphasis on defence as part of wider foreign policy.

Conservatives tend to treat the rule of law with contempt. The Cameron administration hammered the controversial welfare “reforms” through into legislation by citing an archaic law – “commons privilege” – despite the fact it failed to pass through parliament, and no-one wanted the policy implemented. It was imposed, nonetheless.

The government have claimed that the provision of support for citizens from public funds – our social security – presents a “moral hazard” and “perverse incentives”. They used this rationale to cruelly cut people’s lifeline support. Apparently, lining the pockets of rogue multinationals with private profit to prevent people accessing the basic support they have paid into is acceptable, as is handing out millions of pounds of public funds in “tax breaks” to millionaires.

This is a government that doesn’t care whether citizens can meet their basic survival needs. Over the last decade, we have seen the rise of absolute poverty – where people cannot afford to meet fundamental needs such as the provision of food, heating and shelter. We have seen the rise of unjust, punitive policies and growing inequalities.

We have also witnessed emergent expressions of eugenic and social Darwinist ideology underpinning controversial policies such as the tax credit two-child policy.  Iain Duncan Smith claimed the policy would bring about “behavioural change”, discouraging poor people from having children. This cut is particularly unkind as the result is that the state penalises children on the arbitrary basis of how many brothers and sisters they have – a decision out of their hands. This policy violates the human rights of third and subsequent children within a family.

The Tories have told lie after lie and got away with it. In the Commons, MPs are not permitted by convention to use the word “liar”. But democratic accountability should matter rater more than convention. It’s about time that changed.

Back in 2010, few people recognised the arrival of a new form of authoritarian nationalism in the UK. By 2012, it was pretty plain to some of us. But we were often dismissed as “scaremongers” at the time.

In 2012, the Conservatives’ Health and Social Care bill was also pushed through legislation at unholy speed. We are still waiting for the government to fulfil the court ruling, and those of the information commissioner regarding the release of the policy  risk register to the public. I put in an Freedom of Information request, asking for the risk register to be placed in the public domain, and was told by government that “it isn’t in the public interest” to see the catastrophic risk assessment of the policy.

We’ve yet to see the full details of a No Deal Brexit risk assessment.

The Trade Union Bill and the Organised Crime and Police Act aimed at curtailing public protest and was a marked attack on civil liberties. The Tories ensured that private companies made profits from their unprecedented cuts to public services. They, and the vulture capitalist corporations that benefited from the Conservatives’ policies wanted to ensure that strike action and democratic protests were stifled.  In short, the Tories have always seen human rights and democratic norms as a political inconvenience – “red tape” – as have the exploitative big business political bed partners.

Let’s not forget the multiple “grave and systematic” human right violations of disabled people because of  draconian Tory policies. The United Nations investigated the impact of policies, because in 2012, I wrote to the UN and presented evidence subsequently – along with many others. We have submitted empirical evidence of the despotic policy framework that has resulted in human rights violations, and the subsequent suffering of ill and disabled people over several years. The UN report was conclusive.

People have died as a direct consequence of Tory policies, the government should have been removed from office when that finding was reported. Especially when they refused to conduct an inquiry and continued to deny there was any problem with their draconian welfare policy. It seems that the loss of human life is considered rather less serious than telling lies to the queen and suspending parliament to avoid democratic scrutiny. However, all of these events are closely connected.

The Tories have been avoiding democratic scrutiny since they took office back in 2010. The tactics that this government have used to cling onto power amounts to a tyrannical and despicable misuse of psychology, and in particular, behaviourism. All despots are behaviourists.

Over the last decade, neoliberals have used what appear to be objective categories of group behaviours and measurement, which seem to fit very neatly with the pre-existing power structure. And reinforce it. Furthermore, the value-laden categories also form the basis of targeted scapegoating and justification narratives, deployed to make very punitive, controversial policies seem somehow reasonable.

Then there is the utterly woeful performance of the media in holding government to account. That’s because the government ‘brief’ commentators and journalists regarding what they may and may not say – they have ideological control of most of the mainstream media.

Iain Duncan Smith announced in 2012 that he was “monitoring the BBC for “left wing bias”. It was plain back then what was happening. And nothing changed.

The Tories do whatever they can get away with. Authoritarianism advances by almost inscrutable degrees – moral and legal boundaries are pushed incrementally.

Until suddenly, everyone sees it for what it is. But once you hear the jackboots, it’s rather too late.

It’s taken a decade of damage and suffering. We must not let this happen ever again.

I don’t make any money from my work. I’m disabled because of illness and I’m often skint. But you can make a donation to help me continue to research and write free, informative, insightful and independent articles, and to provide support to others. The smallest amount is much appreciated – thank you.

15 thoughts on “It’s not just the PM, the entire government are authoritarian”