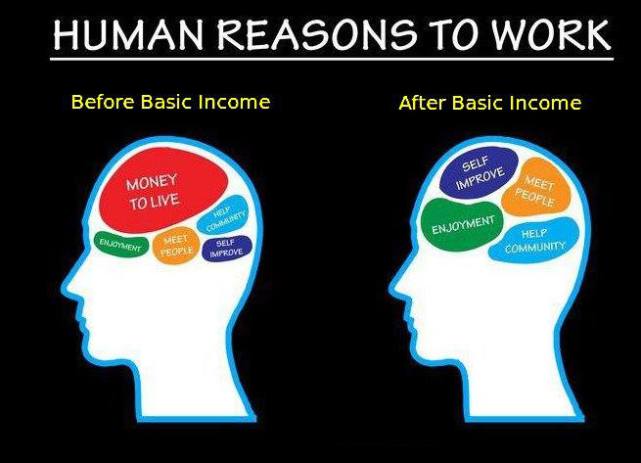 Basic income (which is sometimes called “citizen’s income” or “universal income”) is the idea that absolute poverty can be alleviated by providing every member of a society with an unconditional subsistence income. Supporters of basic income argue that it would alleviate absolute poverty and would also motivate people to work because they would always better off, as work-related income would be additional to their subsistence income.

Earlier this year I wrote  about the Labour Party’s consideration of the universal basic income as a part of its new policy, during their talk at the London School of Economics. John McDonnell said: “It’s an idea we want to look at. Child benefit was a form of basic income so it’s not something that I would rule out.”

At the very least, this indicates the idea of universal provision has regained some credence in the face of a longstanding and seemingly unchallengeable political norm of increasing means-testing and welfare conditionality, established by the Thatcher adminstration, and radically extended by the current government.

Although basic income is a feature in many proposed models of market socialism, and has been particularly popular with the Green Party, support for basic income has also been expressed by several people associated with right-wing political views. While adherents of such views generally favour minimization or abolition of the public provision of welfare services, some have cited basic income as a viable strategy to reduce the amount of bureaucratic administration that is prevalent in many contemporary welfare systems. Others have contended that it could also act as a form of compensation for fiat currency inflation.

Though the details vary, the basic income model has been advocated by  Right-wing thinkers such as Charles Murray, Milton Friedman and the Adam Smith Institute, amongst others. Libertarians who object to income redistribution in principle usually concede that a Negative Income Tax is the least controversial form of welfare, because it is administratively simple and “perverts incentives” less than most welfare schemes. It is particularly appealing to many liberals and libertarians because it is unpaternalistic – it’s highly compatible with laissez faire and neoliberal economic models. However, the current government are libertarian paternalists, blending a small state ideology with a psychocratic approach to governing, using behavioural change techniques (Nudge) to fulfil ideologically-driven policy outcomes.

Last year, the Citizen’s Income Trust (CIT), which has given advice to the Green Party and often cited by the Greens, has modelled the party’s scheme and discovered a major design flaw. It was revealed that that 35.15% of households would lose money, with many of the biggest losers among the poorest households. At the time, Malcolm Torry, director of the CIT, which is a small charitable research body, said: “I am not sure the Green party has yet taken on our new research or the need to retain a means-tested element. We have only just published the new work.”

The criticisms of the scheme, as well as doubts about costings, led the Greens to make a temporary tactical retreat on the issue, with the party’s leader, Natalie Bennett, saying detailed costings for the policy would not be available in the manifesto last March. The Greens had proposed a citizen’s income of around £72 to every adult in Britain regardless of wealth and existing income, which would cost the Treasury around £280bn.

One longstanding criticism of basic income is that it would provide  payments to citizens that are already very wealthy, perpetuating social inequality, and wasting resources. Another is that it does not take into account the long-term impacts and provide adequate support for those who cannot work, such as those who are ill and disabled. Such detail matters very much, and we must not allow basic income to be used as an excuse for dismantling essential welfare support for social groups that need long-term aid to survive.

The CIT added that if the policy was applied without a means-tested component, then poorer households would end up receiving far less in state benefits than they would under the existing system.

However, one of the strongest arguments for basic income is that people would no longer be compelled to work in order to meet their basic needs. This means that employers would find it difficult to exploit workers, and would be pushed to offer decent wages, good terms and employment conditions in order to attract workers. People would have greater freedom to pursue meaningful, suitable and appropriate employment rather than having to take any job to avoid poverty and destitution. De-commodifying labor by decoupling work from income liberates people from the “tyranny of wage slavery” and leaves a space for innovation, creativitity and rebalances power relationships between wealthy, profit-motivated employers and employees.

However, despite claims that the think tank is independent of political parties, Reform Scotland is a public policy institute which works to promote increased economic prosperity and more effective public services based on the libertarian paternalist notions and Conservative principles of limited government and personal responsibility. Reform Scotland is funded by donations from private individuals, charitable trusts and corporate organisations.

The calculations used in the report imply that a Basic Income Guarantee would cost more initially to implement, but the think tank argue that there are strong arguments (which are couched in Conservative terms) to suggest that it would lead to “changed behaviour” and “a bigger workforce.” The think tank proposes that there remains a “disincentive” to work (the so-called “welfare trap”) which is caused by the high level of marginal taxes faced by those moving into work or increasing their hours. In their report, Reform Scotland say: “Our conclusion is that the benefits system should protect the unemployed and under-employed but at the same time must reduce – and ideally remove – any disincentives to take work, particularly part-time work. The manifest failing of the present system is the cash penalty many face when they take a job.”

Reform Scotland is proposing a Basic Income Guarantee which is paid to all working-age adults and children, whether in or out of work. All earnings would be taxed, but the basic income would never be withdrawn, meaning that “work would always pay.”

The think tank argues that radical reform of the current welfare system is required and that a Basic Income Guarantee is the best way forward. This would give every working-age person a basic income from the state of £5,200 per year, and every child £2,600.  The income would be a right of citizenship and would be the same regardless of income or gender. It would be non-means tested and would not increase or decrease as someone’s income changes, thereby removing the need for the associated bureaucracy.

The Basic Income Guarantee would replace a number of means-tested work related benefits, as well as child benefit, and would be a new way of providing a social safety net.

Welfare spending on working-age people has decreased since 2010, and the report highlights a context of the rising costs of pensions, and of £207.6 billion spent on welfare in 2014/15, £114 billion was in relation to pensioners. Of this, about £93 billion is made up by the state pension and pensioner credit. The Reform Scotland proposals therefore relate to the remaining  £93.6 billion, spent on working-age adults and children.

The report, written by former Scottish Green Party Head of Media, James Mackenzie, and former Scottish Liberal Democrat Policy Convener, Siobhan Mathers, in conjunction with Geoff Mawdsley and Alison Payne of Reform Scotland, seeks to promote informed debate of this idea by examining what the level of the basic income might be and how much implementing it would cost.

Reform Scotland’s report also calls for a single department to be responsible for welfare payments, ending the current split between HMRC and the DWP.

Commenting on the report, author James Mackenzie, former Scottish Green Party Head of Media, said: “Basic income is one of those ideas that should appeal right across the political spectrum. When I was unemployed I remember having to think hard about whether to accept part time or short-term work because of the impact on my income. We should be making it easier for people to work who can and who want to, not penalising them. Basic income does just that, as well as helping those who have caring responsibilities, or who want to volunteer or study.

“There’s a resurgence of interest in the idea around the world, especially in Europe, with proposals being considered in Switzerland, Holland, France and elsewhere. The principle is the same everywhere, but policy makers need to know more about the practicalities. Now, for the first time, we are providing some detailed information about how it could work in Scotland, either after independence or after the devolution of the necessary powers.”

Co-author Siobhan Mathers, Reform Scotland advisory board member and former Scottish Liberal Democrat Policy Convener said: “There is a great opportunity for Scotland to design a welfare system that best suits its needs in the 21st Century. We could leave behind the unnecessary complexity of the UK system and provide a fair Basic Income Guarantee for all. This would make any transitions in and out of work more manageable and provide a clear, fair safety net for all.”

We have seen an unprecedented increase in a dark, unaccountable bureacracy this past five years, with private companies such as Atos, Maximus, and the likes of A4E and other private welfare-for-work providers marking the increased conditionality of welfare support – for both out of work support, and soon, for support paid to those in low paid and part-time work.

Conservative inclination has been towards substantially raising the (increasingly privatised and for profit) administrative costs of welfare, whilst at the same time radically reducing the lifeline benefits for people needing support for meeting basic needs.

Conservatives may well raise the “something for nothing” objection to basic income, which is founded on the absurd idea that the only way people may contribute to society is through paid labor.

Yet non-remunerated activities such as bringing up children, caring for elderly or sick and disabled relatives, supporting vulnerable neighbours, community work, volunteering for charities or investing time and effort in other voluntary endeavours such as contributions to the arts, sharing knowledge, education, writing, are all clearly valuable contributions to society. But these skills and activities have been steadily devalued, whilst providing an increasingly disposable (“flexible”) labor force is seen by the Conservatives as somehow fulfilling the best of our potential.

Reform Scotland has previously argued, when putting forward its Devolution Plus proposals, that there is plenty of logic behind bringing together the policy areas associated with alleviating poverty that are currently devolved, such as social inclusion and housing, with benefit provision, which remains reserved. This would help to provide a more coherent approach to tackling poverty and inequality.

The debate on this issue will, no doubt, continue in the years to come.