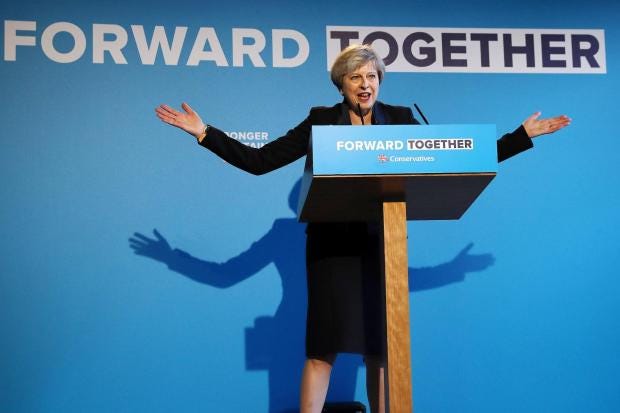 A plurality of views and perspectives is a fundamental ingredient of a flourishing democracy. Freedom of speech is a prerequisite of an inclusive, genuine democracy. When a government tries to stifle some perspectives, and control which views may be expressed or permitted online, it’s an indication that we have left democracy behind, and strayed into the realms of authoritarianism.

If Theresa May gets to form a new government next month, then it would appear that the Conservatives will be attempting a regulatory land grab of the Internet. But, if the Conservatives’ digital record is anything to go by, its pledge to negotiate an “international settlement” and be a “global leader” for an incredibly complex area of Internet and data law looks, frankly, like the stuff of dystopian movies about totalitarian regimes. I suspect the phrase “digital crime” is set to take on a whole new meaning.

I’m all for an internet environment that is safe and free from harassment and bullying. However, we already have legislation in place to ensure that it is.

The proposed laws would also force technology companies to delete anything that a person posted when they were under 18.

The companies would be forced to help controversial government schemes like its Prevent strategy, by promoting “counter-extremist narratives”.

It seems that this is a Conservative reaction to the EU Digital Single Market Project.
It’s aim is “to create a true digital single market, where the free movement of goods, persons, services and capital is ensured — and where citizens and businesses can seamlessly and fairly access online goods and services: whatever their nationality, and wherever they live.” (Commission Press Release May 2015).

As my friend Hubert Huzzah has pointed out, the European Single Digital Market will make it difficult to defraud people, and importantly,  it will the Election manipulation in the form of  “we are just advertising on Facebook” strategies worthless.

The Conservative plans are in keeping with the Conservatives’ commitment that the online world must be regulated and controlled as strongly as the offline one, and that the same rules should apply in both.

“Our starting point is that online rules should reflect those that govern our lives offline,” the Conservatives’ manifesto says, in justification for the new level of regulation.

In laying out its plan for increased regulation, the so-called “small state” Tories anticipate and reject potential criticism that such rules could put people at risk.

“While we cannot create this framework alone, it is for government, not private companies, to protect the security of people and ensure the fairness of the rules by which people and businesses abide,” the document reads. “Nor do we agree that the risks of such an approach outweigh the potential benefits.”

Tucked away at the end of the Conservative’s manifesto, it’s clear that May wants to introduce huge changes to the way the internet works:

“We will take up leadership in a new arena, where concern is shared around the world: we will be the global leader in the regulation of the use of personal data and the Internet.”

Among the new self -appointed powers proposed, the government intends to force internet companies to remove “explicit” or “extremist material”, backed by legal power to impose fines.

This is a government that has labeled disability campaigners  “extremists” and fully endorsed the media labeling of those in standing in democratic opposition to Conservative policies as “saboteurs”.

The Conservatives say “Some people say that it is not for government to regulate when it comes to technology and the internet.  We disagree.”

The Conservatives are claiming this proposal is part of an ambitious attempt by the party to impose some sort of “decorum” on the internet and social media.

Senior Conservatives have also confirmed to BuzzFeed News that the phrasing indicates that the government intends to introduce huge restrictions on what people can post, share and publish online.

The plans will allow Britain to become “the global leader in the regulation of the use of personal data and the internet”, the manifesto claims.

There are many proposed measures in the manifesto that are designed to make it easier to do business online, of course, but the Conservatives are proposing a rather more oppressive approach when it comes to social networks.

One particular issue that caught my eye was the Conservative’s voiced “concerns about online news”, warning the government is willing to “take steps to protect the reliability and objectivity of information that is essential to our democracy”, while pledging to “ensure content creators are appropriately rewarded for the content they make available online”.

One Tory source clarified that this comment relates to Google and Facebook’s growing dominance of the advertising market, which the newspaper industry believes is crushing its business model. The source suggested that if the web giants failed to act voluntarily then they could be forced by legislation to find ways to financially compensate traditional news producers.

So, the Conservatives will also seek to regulate the kind of news that is posted online and how companies are paid for it.

This may have some potentially serious implications for the growing number of online independent media platforms that have developed precisely because of an undemocratic crisis of representation in our mainstream media, which has increasingly become an unreliable source of objective news, generally.

We are not constrained by the interests of society’s major power-brokers. So far.

I haven’t forgotten Iain Duncan Smith’s pledge to “monitor” the BBC’s news coverage for “left wing bias”, or the jackbooted government officials visiting the Guardian offices to smash the hard drives containing the Snowden leaks. This doesn’t signal a coming improvement if it is to be based on Tory standards of “objective and reliable”.

The manifesto also says that the government will work even harder to ensure there is no “safe space for terrorists to be able to communicate online”. That is apparently a reference in part to its work to encourage technology companies to build backdoors into their encrypted messaging services – which gives the government the ability to read terrorists’ messages, but also weakens the security of everyone else’s messages, technology companies have warned.

The proposals follow on from the Investigatory Powers Act being passed into law. That legislation allowed the government to force internet companies to keep records on their customers’ browsing histories, as well as giving ministers the power to break apps like WhatsApp so that messages can be read.

Imagine a future when the only online reflection of reality is a Conservative one. Antisocial media.

“In every really great world-shaking movement, propaganda will first have to spread the idea of this movement. Thus, it will indefatigably attempt to make the new thought processes clear to the others, and therefore to draw them over to their own ground, or to make them uncertain of their previous conviction.

Now, since the dissemination of an idea, that is, propaganda, must have a firm backbone, the doctrine will have to give itself a solid organization. The organization obtains its members from the general body of supporters won by propaganda. The latter will grow the more rapidly, the more intensively the propaganda is carried on, and the latter in turn can work better, the stronger and more powerful the organization is that stands behind it.” Adolph Hitler, Mein Kampf.

Hitler’s promise of “strong government and stability” was widely supported particularly by industrialists and businesses, who were terrified of the left wing unions, socialism and communism.

A lot of people describe Theresa May as a New Right Conservative, some have been misled by her semantic shifts and claimed she is a “red Tory”. However, it seems she is more of an old right wing authoritarian, after all.

The stuff of nightmares.

I don’t make any money from my work. I am disabled because of illness and have a very limited income. Successive Conservative chancellors have left me in increasing poverty. But you can help by making a donation to help me continue to research and write informative, insightful and independent articles, and to provide support to others. The smallest amount is much appreciated – thank you.