Narratives of “welfare dependency” have once again become much more common place and increasingly assertive under the coalition Government – embedded in narratives driven by the the so-called Skivers and Strivers dichotomy. Poverty, according to this distinctly Tory perspective, is caused by a culture of deviance, idleness and dependency. The poor are responsible for their poverty. They cannot be trusted to be responsible, or make the right choices for themselves – or society more generally – and so are in need of paternalistic guidelines and cognitive behaviour therapy. Poverty is being re-responsiblised.

A simple truth is that poverty happens because some people are very, very rich. That happens ultimately because of Government policies that create, sustain and extend inequalities. The very wealthy are becoming wealthier, the poor are becoming poorer. This is a consequence of vulture capitalism, designed by the sheer opportunism and pathological greed of a few, it is instituted, facilitated and directed by the Tory-led Coalition.

Welfare provision was paid for by the public, via tax and NI contributions. It is not a handout. It is not the Governments money to cut. That is our provision, paid for by us to support us if and when we need it. It’s the same with the National Health Service. These public services and provisions do not and never did belong to the Government to sell off, exploit to make a profit from, to strip bare, as they have done

For the Tories, the competitive pursuit of economic gain is the only freedom worth having. And only those that have gained substantially have freedoms worth having. Let’s not lose sight of the fact that this social Darwinist approach to socio-economics means unbridled private business, insidious systematic indoctrination, gross exploitation of the masses and political extortion.

Public understanding is being purposefully distorted and the reality of society’s organisation is concealed to serve the interests of an elite, through a process of ideological hegemony – whereby existing political arrangements, ways of thinking and social organisation are tacitly accepted as logical and “common sense”. The media serve as ideological state apparatus that transmit this “common sense”. The truth is that poor people are the victims of politically manufactured  inequality and crass exploitation. Our once progressive, civilised society is being savagely dismantled, and the Tories are steadily and clumsily re-assembling it using identikit Victoriana.

The truth is that David Cameron has deliberately and spitefully targeted the poorest and most vulnerable to bear the brunt of the austerity cuts. When we actually look at the relative targeting of the Tory-led cuts of different social groups, then we see that:

This is a Government that deliberately creates insecurity and scarcity for many: income, employment opportunities, affordable housing, education opportunities, access to justice, health, energy, for example, whilst private companies make lots of money from these deliberately engineered circumstances, such as by using workfare to boost their profits from the use of free labour (at the expense of the tax payer).

The Governments’ economic decisions, policies and driving, incoherent ideology has created high unemployment and underemployment, job instability, they’ve devalued the worth of labour, excluded those who are vulnerable from the labour market by withdrawing support from them, and then has the vindictive gall to savagely blame the victims of its own crimes, for those crimes, conducting media character assassinations of the poorest, the weakest, demeaning people via the media, stripping them of their dignity and LYING about them.

Our economy is being tailored by the Tories to serve 1% of the population and this has a detrimental effect on everyone else. The Government has removed support and services for the people who need them most, whilst insisting that they must work. To regard the poorest and most vulnerable members of our society as less valuable, and to constantly attack them via the media is quite frankly disgusting conduct for a Government and those that support these despicable and hideous political narratives and policy actions. Such narratives say everything about the authors, and have nothing meaningful at all to say about those left in the situations that this Government have manufactured via policies: those situations which none of them have ever had to experience or face personally.

No-one seems to have challenged the idea that working to make someone else very wealthy is somehow virtuous, either. By implication, those that cannot work are regarded as lesser citizens, and that has become tacitly accepted. We have, once again, a Government that makes labouring compulsory, regardless of a persons capability, yet the same Government has devalued labour in terms of wages, rewards, and working conditions, whilst handing out huge amounts of our money to those exploiting the poor unemployed, the sick and disabled. And Tories are always about vicious and divisive rhetoric. Growing social inequality generates a political necessity for prejudices.

Most people who don’t work have no choice about it due to circumstances, such as poor health, disability, caring responsibilities, parenting responsibilities and a lack of reliable, affordable childcare, being frail and elderly. These are reasons that are completely out of a persons control. People forget that ill health doesn’t discriminate: it can happen to anyone. And so can unemployment. No-one is invulnerable, except for the very wealthy: the ones that won’t ever need any state support.

Let’s hear some mention of facts in the media, instead of the usual Tory mouth pieces sanctimoniously preaching at people, “advising” how to manage their loss of lifeline support better, whilst endorsing the sadism of this Government. Let’s hear a loud and civilised call for the halt to the current program of cruel cuts, which are disproportionately targeted at those with the very least, whilst this Government rewards those with the very most with massive tax handouts. Let’s hear the demand for decency, and a new and fair welfare system that is built on a fundamental recognition of the equal worth of all human beings and the guarantee of human rights for all.

It’s time we stood up as a nation on our hind legs. 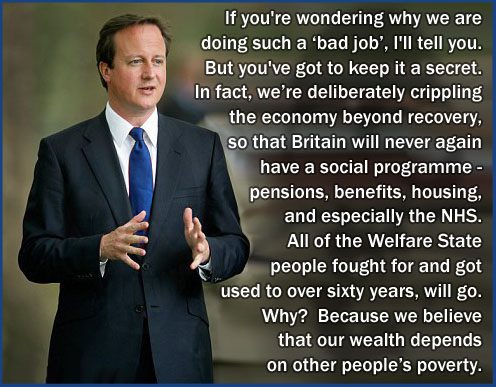 Thanks to Robert Livingstone for his brilliant art work.

This was originally written as a part of a longer piece of work: The right-wing moral hobby horse: thrift and self-help, but only for the poor.

8 thoughts on “The moral nihilism of the Coalition”