Years before Andrew Lansley was to begin the dismantling of the National Health Service, Conservative Oliver Letwin told a private meeting in 2004 that the NHS would cease to exist within five years of a Conservative victory.

In the 6 years before the Tory Health and Social Care Act became law the NHS ran a budget surplus of a combined total of more than £10 billion. This can be confirmed on page 9 of the report document Tough times, tough choices – An overview of NHS finances.  Of that £10 billion surplus, more than £2 billion of the surplus came from NHS Trusts in the years preceding 2012.

After the passing of the Tory Health and Social Care Act, however, the combined surplus in the NHS Trust Sector has declined sharply. For example, in the most recent year, the NHS Trust surplus halved. This is confirmed on page 20 of the report.

The picture looks even more dire when we focus on “acute” or hospital Trusts, and not just the NHS Trust Sector as a whole. In 2012-3,  8% of hospital trusts warned of financial difficulty – see here. By December 2013, however, this figure of 8% has soared to a massive 44% of Acute Trusts in financial trouble.

It is clear that our NHS Hospital Sector is in severe financial trouble and evidence would indicate that the Tory Health and Social Care Act has caused it.

The Department of Health has disclosed that 4,620 frontline staff were made compulsorily redundant between 2010-11, and an  overall total of 7,000 key NHS clinical staff made redundant amid Government enforced cuts. The Labour Party also released a ministerial response to a parliamentary question which showed that a total of 7,435 fewer training places for nurses have been commissioned by the NHS in England over the last three years compared with 2009-10, when they were in power. In that year there were 20,829 training places available for would-be nurses, but that fell to 20,092 in 2010-11, then 17,741 in 2011-12 and then 17,219 in 2012-13.

A further 250,000 plus NHS and Social Care jobs have been axed or converted to zero hours contracts under David Cameron. There are 132,095 fewer staff employed in the NHS and Social Care services by the state today than there were in 31 March 2010. This is verified by the Office for National Statistics here and here. Overall, NHS staff headcount has been cut by 37,000 since April 2010. Other Health & Social Care Staff have been cut by 95,000.

It’s worth considering that the Information Commissioner Christopher Graham launched a scathing rebuke on the decision to exercise the Government’s veto, in a report on the case of the Health reforms risk register to Parliament in 2012. Blocking the publication of the report into the risks of the NHS reforms was also a sign that ministers want to downgrade freedom of information laws, a watchdog warned.

Health Secretary Andrew Lansley deployed the veto when an Information Tribunal ruled that he should meet Labour demands to disclose the document. The risks that the Health Bill impose on our health service remain undisclosed. This is an unacceptable state of affairs, especially given that we are a so-called democratic nation.

The UK Statistics have also rebuked the Government over NHS spending claims – David Cameron famously promised he would cut the deficit, not the NHS. We have it in black and white: he is cutting the NHS, not the deficit. There could be no clearer evidence of the failure and deceit of this Prime Minister and his Government.

The watchdog called on ministers to correct the claims the coalition has made that they increased NHS spending in England. The UK Statistics Authority upheld a complaint by Labour about government claims that the NHS budget had increased in real-terms in the past two years.

The watchdog found the best-available Treasury data showed that real-terms health spending was lower in 2011-12 than in 2009-10. The coalition lied and said during its spending review the NHS budget had gone up.

“For months, David Cameron’s Government have made misleading boasts about NHS spending, misrepresenting the true financial difficulties he has brought upon the NHS. At the same time they have recently begun to try to distance themselves from these problems which David Cameron has created, trying to shift the blame to the NHS and its staff.” – Andy Burnham

Labour have pledged to repeal the Coalition Health and Social Care Act.

List of MPs with links to private healthcare firms 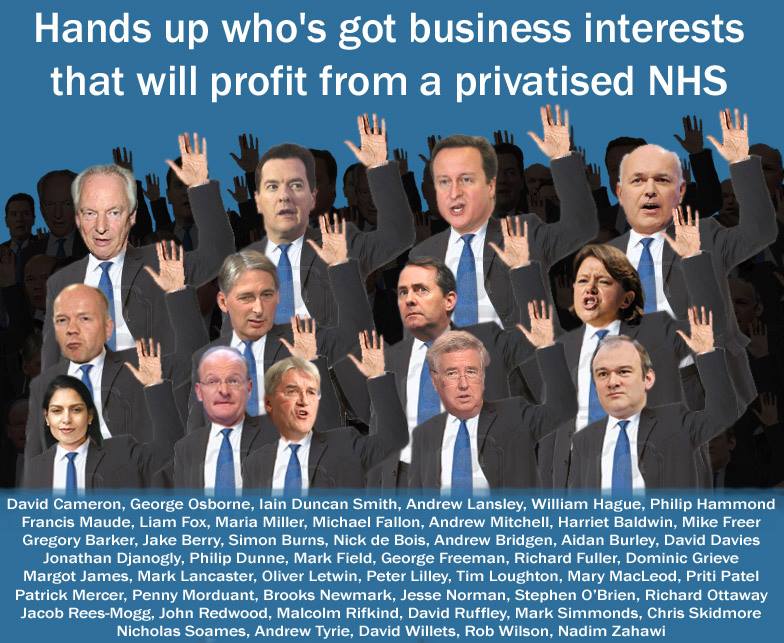 Big thanks to Robert Livingstone