“Ministers keep using the mantra that their proposals are to protect the most vulnerable when, quite obviously, they are the exact opposite. If implemented their measures would, far from protecting the most vulnerable, directly harm them. Whatever they do in the end, Her Majesty’s Government should stop this 1984 Orwellian-type misuse of language.”  – Lord Bach, discussing the Legal Aid Bill.

Posted by Sadiq Khan, Shadow Lord Chancellor, Shadow Justice Secretary and Member of Parliament for Tooting, on 19 May 2014 In Huff Post Politics blog.

Solicitors, barristers, judges, legal advisors, campaigners and others will today take part in the London Legal Walk. Thousands of people will snake their way from the Royal Courts of Justice to Hyde Park and back to raise money in support of free legal advice charities in London and the South East. Last year, 7,500 walkers raised a staggering half a million pounds. With this year being the tenth anniversary, and the need for free legal advice being as great as ever, the London Legal Walk is aiming to surpass last year’s fantastic total.

Given this is a really important cause I was determined to find time in this week’s busy election campaign schedule to join the walk. Today, I’ll be walking with colleagues from the excellent Justice Gap. Please do find time to sponsor them, and help the cause. The work of the London Legal Support Trust, who organise the walk, supports access to justice across London and the South East for many people who would be adrift without it. Similar charities are doing sterling work in other parts of the country. And their efforts are more important than ever as the growing crisis in our legal system threatens to undermine access to justice.

Our legal system functions on a crucial principle – that every single person is equal before the law. It’s deemed so important, it’s enshrined as Article 7 of the Universal Declaration of Human Rights. Without it, our legal system would become unfair, biased and arbitrary, and would lose the confidence of the millions of people it is there to protect.

When the welfare state was created by the post-war Labour government they had the wisdom to deem access to justice equally important as access to healthcare and social security. This gave birth to legal aid, providing assistance to those without the financial means to defend themselves in legal disputes.

We shouldn’t ever forget how important this is. In criminal cases, the state prosecutes and brings to bear the full weight of the government, procuring the finest legal minds money can buy. A defendant faces a potential inequality of arms as a result, and legal aid was designed to bring about a level playing field.

This is crucial because it ensures justice is done. Without it, the guilty may go free and the innocent may be convicted. No one wants miscarriages of justice, least of all victims of crime. They want the truly guilty convicted and punished, not walking the streets. Legal aid is crucial in achieving this.

Legal aid was also crucial in enabling people facing problems with welfare benefits, debt, housing and other social welfare problems having access to expert advice who could help the vulnerable appeal and challenge decisions by faceless bureaucrats employed by the state and it’s agents.

But legal aid has faced an onslaught from the current Government. In 2011, civil legal aid was decimated, leading to Law Centres and CABs closing down or facing the threat of closure and the creation of advice deserts. Many vulnerable people were left with nowhere to turn, something I’ve witnessed first-hand in my surgeries as people at the end of their tether turn up with bags and bags of paperwork.

More recently, the Government unveiled plans to shave a further £220million off criminal legal aid, generating considerable opposition from across the profession and in charities and campaign groups.

Ministers have fought a clever guerrilla campaign. They’ve salami sliced bit by bit to mitigate the short-term impact of their plans. They successfully divided and ruled the legal profession. They’ve smeared legal aid lawyers as fat cats and made out legal aid is only used by unworthy criminals.

Needless to say, the truth is rather different. Ministers were in hot water when the UK Statistics Authority dismissed the Government’s use of dodgy earnings data for lawyers. Legal aid isn’t just about bad people – it supports defendants at the stage when they are still innocent and helps many to subsequently prove their innocence. What’s more, it helps right wrongs. Without it, miscarriages of justice like the Guildford Four or Birmingham Six would never have been corrected. It also helps people who have wrongly had benefits removed or facing housing evictions appeal poorly made decisions, saving them misery and the State further money down the road.

Come 2015, £600million of the 2010 legal aid budget of £2.1billion will have been cut. Labour, as a sensible opposition, has challenged & questioned ministers. We’ve scrutinised their plans and exposed the foolhardiness and impacts of Government policies.

Alternative savings were put forward but just ignored. Instead, Ministers cut legal aid without doing anything to reform the system. Our warnings – and those of many others – were ignored. The result is an ever diminishing service – advice deserts have been created, junior lawyers have left the profession, access to justice had been denied to thousands and most recently we saw the collapse of the Operation Cotton serious fraud trial, with the fear other trials may also be affected.

But today’s sensible opposition is, I hope, tomorrow’s Government. If I have the privilege of becoming justice secretary in 2015, I’ll inherit a shell-shocked legal system. And I know there’s a hunger to hear from Labour what we will do to rebuild.

I admit it’s a daunting task taking over a decimated department. The scale of the challenge, whoever wins the next election, is enormous. The Ministry of Justice budget to run prisons, probation, courts, tribunals, coroners, youth justice, the Parole Board and legal aid will be approaching £6billion, down from £10billion five years before.

Simply committing to reinstate in its entirety what is being cut by the current Government is unrealistic. It’s not credible to pretend that all the money cut can be found from elsewhere. I can’t simply close prisons or shut down the youth justice system to completely reinstate legal aid. What’s more, the landscape is changing all the time and will change more by 2015. Lawyers and advisors have left and premises vacated. The way we used to deliver civil legal aid and the expertise that surrounded it will be gone in many parts of the country. There won’t be the people and organisations.

That’s why we’re going to have to think radically and differently about the way we do justice in both crime and civil if we are going to make any attempt to widen access to justice. Recently, the Lord Chief Justice, Lord Thomas, spoke about the need to uphold the rule of law within squeezed budgets. He said “we can only do that by radically examining how we recast the justice system so that it is equally, if not more, efficient and able to carry out its constitutional function”. He’s fired the starting pistol in a crucial debate.

And I have already begun work on how we can repair some of the damage done to access to justice. Big ideas are bubbling up. I’ve read the report of the Low Commission, and I’m heartened at the optimism in their recommendations. The work of Roger Smith and Richard Susskind and their ideas for using IT to provide low-level legal advice offers real opportunities. It means we could widen access to justice to areas not covered at the moment or in the recent past. And what about more inquisitorial ways of working? Making greater use of the ombudsman model for dealing with civil disputes before they escalate to the expensive courtroom? That being said the harsh reality is we’ll have to work within existing budgets.

Between now and the election, I’m working closely with colleagues on constructing a set of ideas which we can implement if we win the next election. We’ll need to hit the ground running, given the dramatic deterioration we’re witnessed in the legal system. But believe me, Labour’s starting point will be how to maximise access to justice – not like this Government, who’ve shown scant regard for the rule of law and the integrity of our precious legal system.

Related: The Coming Tyranny and the Legal Aid Bill 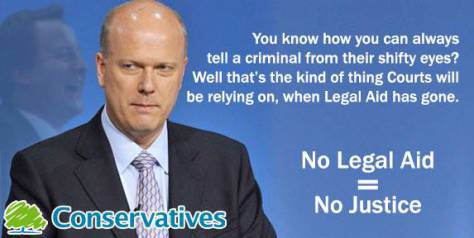 Thanks to Robert Livingstone