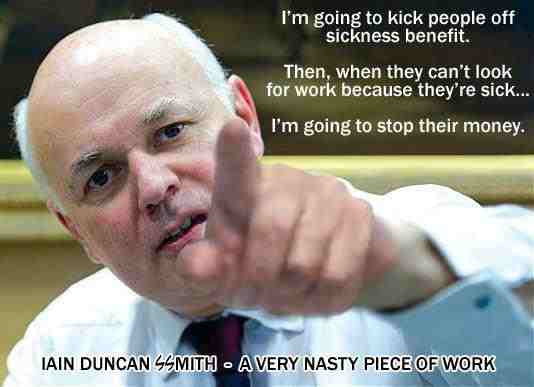 This is the edited text of a speech I made today in the House of Commons, in a debate I initiated on the many cases of sanctions being wrongfully applied to benefit recipients, calling on the Government to review the targeting, severity and impact of such sanctions.

The process of sanctioning benefit recipients is now being used on an enormous scale—almost 1 million sanctions a year. Even the right-wing Policy Exchange think-tank acknowledged in a report published last month that about 68,000 benefit claimants each year are having their welfare payments stopped unfairly. Given that the penalty for the first infringement is the loss of benefit for four weeks, for the second the loss of benefits for three months and for the third the loss of benefits for three years, the number of people being driven into destitution by administrative diktat is enormous. Even the Policy Exchange admits that 8% of that number should never have been sanctioned.

I presume that everyone accepts that fall-back sanctions have to be applied in extreme cases where there is deliberate and real non co-operation with the obligation to try to find work and where no good reasons have been found for such behaviour. Those sanctions should be proportionate and reasonable and not exercised punitively or with a view to achieving targets or objectives—whatever we call them—for removing people from the unemployment list.

From the evidence that I have collected from my constituency surgery, Citizens Advice, YMCA, the excellent Work and Pensions Committee report on this issue and the Library, it is abundantly clear that the standards that the DWP likes to claim always apply in sanctioning cases far too often certainly do not. I wish to cite a number of cases drawn directly from those sources.

A security guard at a jobcentre turned away a man with learning disabilities who had arrived 20 minutes early to sign on. The man then returned two minutes late to sign on and had his JSA sanctioned for 4 weeks.

A man was sanctioned for four weeks because he had not known about an appointment as the letter had been sent to an address that he had left a year ago, even though Jobcentre Plus was aware of his current address.

A woman claiming employment and support allowance had been diagnosed with cervical cancer and had given the back-to-work scheme provider a list of her hospital appointments. She was sanctioned for failing to attend an appointment on the middle day of her three-day hospital stay. The woman had two daughters but her ESA was reduced to £28 a week. She asked for reconsideration, but had heard nothing five weeks later.

A woman was sanctioned for failing to attend provider-led training when the receptionist had rung to tell her not to come in because the trainer was ill. She was subsequently told that she should have attended to sign the attendance register.

A woman whose ESA was sanctioned had her benefit reduced from £195 to less than £50 per fortnight because she missed a back-to-work scheme appointment owing to illness. Her sister had rung two days beforehand to say that she could not attend and arranged another date, when she did attend.

An epileptic man had his JSA sanctioned for four weeks because he did not attend a back-to-work scheme meeting as his two-year old daughter was taken ill and he was her sole carer that day. He rang the provider in advance, but was told this would still have to be noted as “did not attend”. During the four-week sanction he suffered hunger, hardship, stress and an increase in epileptic attacks, but he was not told about hardship payments or food banks or how to appeal the sanction decision.

Lastly, a man in Yorkshire and Humber was sanctioned for allegedly failing to attend back-to-work scheme events. He had in fact attended, and the provider had no record of any failures. His hardship request was not processed, his housing benefit was stopped, and he fell into rent arrears and had no money for food, gas or electricity.

These are not isolated or exceptional cases. Jobcentres Plus have the right to “reconsider”, which is a euphemistic term, and they sometimes do, but appeals often take three or more months, and are extremely bureaucratic, long-winded and difficult. Far more effort should be put in before the decision is taken to sanction, so that we get sensible decisions and long appeal procedures are not required.

Before I turn to what should be done to change policies and procedures that are patently not working properly, I want to make two wider points. First, everyone who can do so should seek work. The overwhelming majority of the jobless are desperate to find work. However, when 2.4 million people are on the dole queues today and there are only 558,000 vacancies, three out of every four simply cannot find a job whatever they do. A report in the Financial Times this week says that there are 3 million under-employed people who would be keen to work full time if only the jobs were available. The real problem in Britain today is not people failing to try to get work, but the Chancellor’s obsessional austerity policies that contract the economy and fail to provide the job opportunities that people are desperately looking for.

I do not object to the use of sanctions in the tiny number of cases in which they might be needed as long as they are proportionate and reasonable. However, I do object to the hounding of some of the most vulnerable people in our society, often for trivial, ill-considered or utterly unjustified reasons, and driving them into destitution when those who caused the financial crash and the longest recession in this country for 140 years get no sanction at all. It is a classic case of one law for the rich and another for the poor.

What should be done? Plenty. Sanctioning is being used on far too large a scale. The practice is not only unduly harsh and, obviously, causes severe hardship, but is often counter-productive. The YMCA cites three people’s comments about its effects. One says:

“I was unable to look for work as much as I could before”.

“It stopped me from searching for work as I had no money to get to different employers”.

“My focus turned to survival rather than gaining employment”.

Benefit off-flow—a horrible bureaucratic phrase that treats human beings like counters—is, perversely, the key performance measure used by Jobcentre Plus. Disallowances—that is the euphemism used by the Department for Work and Pensions—are included in the off-flow data for people coming off the unemployment list, so staff have an in-built incentive to use them to achieve what they perceive their management expect of them.

Much more could be done to prevent situations that cause sanctioning from arising in the first place because it is clear that in a great many cases people simply do not understand what is required of them. Regrettably, there is a toxic yet pervasive culture in Jobcentre Plus of “Sanction first; think later”, as is shown by the shockingly large number of sanctions against young people—there were 39,000 last year—that are subsequently overturned or, to use that wonderfully euphemistic word, “reconsidered”. Serious, thoughtful effort is needed to do everything possible to secure compliance, with which we all agree, without a sanction being necessary. There should be more common-sense discretion and much less of a rush to action: action should be taken only as a last resort.

Much more attention should be paid to the impact of sanctioning on claimants. An Oxfam report published last May estimated that 500,000 people were reliant on food aid—I suspect that that figure has now nearly doubled—and that more than half of people who turned to food banks did so a direct result of having their benefit payments delayed, reduced or withdrawn altogether. In 21st century Britain, can forcing hundreds of thousands of people onto food aid, which is usually associated with third-world countries, conceivably be justified when the root cause of the problem is the Chancellor’s failure to grow the economy and create jobs because of his obsession with prolonged austerity? I think not, which is why I submit to the House that there is an urgent need, as my motion demands, to review the targeting, severity and impact of sanctioning as it is currently applied.

13 thoughts on “The targeting, severity and impact of sanctions on benefit claimants needs urgent review”