Existing benefit rules mean it is not possible to legally require claimants to have treatment, such as therapy or counselling, as a condition of receiving sickness benefits. Nor is it ethical.

However, senior ministers have proposed that the rules should be reviewed in order to reduce the “huge” numbers of people who are declared unfit for work due to mental health problems.

As a testimony to how bad this idea is, Sarah Wollaston, the Conservative chairman of the health select committee, has responded by saying that forcing people into counselling would present “profound ethical issues”.

She urged David Cameron to “squash” the proposals amid concerns about the damage they are doing to the image of the Conservative party. She said: “Consent is a very important principle and to link some kind of compulsion to that treatment would be grossly unethical. There would be a serious risk of a doctor being challenged and taken to the GMC”.

“You would get people going to GPs having a prescription so they could demonstrate they have got treatment. Enormously wasteful of time. Far better to get on with parity of esteem.”

The first of four government pilots is already being trialled at four job centres – Durham and Tees Valley, Surrey and Sussex, the Black Country and Midland Shires.

The pilot will “test whether combining talking therapy with employment support based on the “individual placement and support” model works better than the usual jobcentre or mental health support for Employment Support Allowance (ESA) claimants”, said the Department for Work and Pensions.

Tom Pollard, policy and campaigns manager at Mind, said: “If people are not getting access to the support they need, the government should address levels of funding for mental health services rather than putting even more pressure on those supported by benefits and not currently well enough to work.”

The government says it spends around £13bn a year on ESA and incapacity benefits. It estimates that it could save £1.41 for every £1 it spends on this “new mental health treatment.” See more here on such Nudge Unit inspired nonsense. 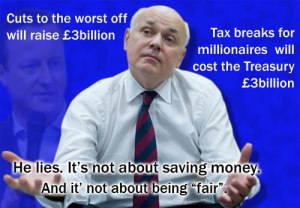 It’s against the law to force anyone to undertake medical treatment.

Meanwhile, ESA sanctions had increased fourfold in the space of a year – up to December 2013 – and are particularly targeted at claimants with mental health conditions.

The number of sanctions applied to ESA claimants rose 334% between December 2012 and December 2013, according to  Department of Work and Pensions statistics.

In addition, the statistics show that, of the 28,702 decisions:

Since the new Job Seekers Allowance (JSA) sanctions regime was introduced on 22 October 2012, there have been a total of 1,028,819 adverse JSA sanction decisions up to the end of December 2013.

The Department of Work and Pensions statistical release is available on the .Gov website

Six out of every ten sanctioned ESA claimants are extremely vulnerable people with a mental health condition or learning difficulty, according DWP figures, obtained under the Freedom of Information Act. The proportion has risen from 35% of sanctioned claimants in 2009 to 58% in 2013. The statistics demonstrate that sanctions are now overwhelmingly aimed at the most vulnerable individuals by a government department which is using a policy of institutional discrimination to cut benefits costs.

Sanctions of £71.70 a week are imposed when ESA claimants in the work-related activity group are forced onto the work programme and then fail to meet mandatory conditions imposed on them by private sector companies.

However, for a person to get into the ESA work-related activity group on mental health grounds, they need to score a minimum of 15 points at assessment for problems with issues such as:

So, it’s pretty obvious that many will struggle to cope with regular and punctual attendance on training courses and work-experience placements with strangers in unfamiliar places. Even if some people manage to attend, they may not succeed in participating to the satisfaction of those running the courses or placements. People are being coerced by the DWP to engage in activities that they are simply not well enough to undertake.

Debbie Abrahams, a Labour MP, and a member of the Work And Pensions Committee, has been leading the calls for an inquiry into the issue of sanctions. She said:

“As a member of the work and pensions select committee I’ve been very concerned about the growing evidence of inappropriate sanctioning and demanded that that a second independent inquiry into the issue is established.

“When I made my demands face-to-face with Esther McVey at a Committee session back in November she agreed to set up an independent investigation into the ‘appropriateness of sanctions’ and her offer was welcomed by the Committee in their following report. But, in a deliberate snub to the Committee, the Government have now said they won’t set one up.

“My question is this: If sanctions are currently being applied correctly, an independent review will testify to that, so just what are Ministers trying to hide?

“It’s just another example of how Iain Duncan Smith and Esther McVey are using smoke and mirrors to avoid any criticism about the mess and misery they are creating in the social security system.

“No-one is arguing with the fact that anyone who is on work related benefits should do all they can to find appropriate employment. But there is a growing body of evidence that the way the government is implementing sanctions means vulnerable people are being targeted disproportionately and suffering terribly as a result.

“The last thing Iain Duncan Smith and Esther McVey want is for that uncomfortable truth to be uncovered by a focussed and independent investigation.”

Polly Toynbee from the Guardian has interviewed an anonymous jobcentre manager who says that the Department for Work and Pensions now have targets for bullying claimants off ESA.

Polly met the jobcentre manager, in secret, who told her how the sick are treated and what harsh targets she is working under to force very vulnerable people off benefits.

“I just met a jobcentre manager. It had to be in secret, in a Midlands hotel, several train stops away from where she works. She told me how the sick are treated and what harsh targets she is under to push them off benefits. A high proportion on employment and support allowance have mental illnesses or learning difficulties.

The department denies there are targets, but she showed me a printed sheet of what are called “spinning plates”, red for missed, green for hit. They just missed their 50.5% target for “off flows”, getting people off ESA. They have been told to “disrupt and upset” them – in other words, bullying. That’s officially described, in Orwellian fashion, as “offering further support”. As all ESA claimants approach the target deadline of 65 weeks on benefits – advisers are told to report them all to the fraud department for maximum pressure. In this manager’s area 16% are “sanctioned” or cut off benefits.

“Of course it’s not written down anywhere, but it’s in the development plans of individual advisers or “work coaches”. Managers repeatedly question them on why more people haven’t been sanctioned. Letters are sent to the vulnerable who don’t legally have to come in, but in such ambiguous wording that they look like an order to attend. Tricks are played: those ending their contributory entitlement to a year on ESA need to fill in a form for income-based ESA.

But jobcentres are forbidden to stock those forms. These ill people’s benefits are suddenly stopped without explanation: if they call, they’re told to collect a form from the jobcentre, which doesn’t stock them either. If someone calls to query an appointment they are told they will be sanctioned if they don’t turn up, whatever. She said: “The DWP’s hope is they won’t pursue the claim.”

“Good advisers genuinely try to help the mentally ill left marooned on sickness benefit for years. The manager spoke of a woman with acute agoraphobia who hadn’t left home for 20 years: “With tiny steps, we were getting her out, helping her see how her life could be better – a long process.”

But here’s another perversity: if someone passes the 65-week deadline, they are abandoned. All further help is a dead loss to “spinning plates” success rates. That woman was sent back to her life of isolation: she certainly wasn’t referred for CBT. For all this bullying, the work programme finds very very few jobs for those on ESA.”

Polly Toynbee’s full article in the Guardian is here

Thanks to Robert Livingstone for his brilliant memes.