The Conservative election guru’s staff engaged in an ‘edit-war’ to delete details of his links with the tobacco industry and his election strategies from Wikipedia.

A Channel 4 News investigation has found that substantial sections were removed from the Wikipedia page of Lynton Crosby, an Australian political strategist, by staff at the Crosby Textor consultancy firm that he co-founded.

The policy on cigarette packs has been revived after a review, but at the time the press linked the policy being dropped to Crosby Textor representing the tobacco giant Philip Morris.

The deleted section includes a call by a Liberal Democrat MP for Lynton Crosby to be sacked.

This lead to the Crosby Textor-linked accounts, including entire Crosby Textor computer networks, being permanently banned from editing any Wikipedia entry.

Crosby Textor said: “It’s hardly surprising that any individual or company would want to correct inaccuracies and falsehoods on its Wikipedia page. Indeed, Channel 4 News appears to have a team of editors making hundreds of corrections and alterations to its Wikipedia page.”

Channel 4 News has identified eleven changes made to its own page from computers on ITN servers. All of the edits relate to adding or removing the names of staff.

The edits deleted a section outlining how Mr Crosby is said to favour the so-called ‘wedge issue’ strategy.

The deleted section on Wikipedia says: “The party he advises introduces a divisive or controversial social issue into a campaign… (with) the goal of causing vitriolic debate inside the opposing party.”

The edits also deleted information about Lynton Crosby’s alleged role in controversial claims made during the 2011 Australian federal election when allegations were made of asylum seekers throwing children overboard, and a slogan “We will decide who comes to this country and the circumstances in which they come” came to prominence.

One Crosby Textor-linked staff member annotated the edit with the words: “Spurious attempts are being made on this page. Opinion should not be confused with fact. If a user wishes to make changes they should balance the points rather than cherry-pick negative content.”

The only part of the “Tactics” section of the entry that was not deleted said: “Crosby is said to run a tight ship, focus on simple messages, target marginal constituencies and use lots of polls.”

Channel 4 News has found that the edits were made by at least two separate Crosby Textor staff, one whom worked on Boris Johnson’s 2012 campaign to be re-elected Mayor of London.

A separate user on a Crosby Textor internet address in Australia on July 15, 2013, made three edits between 02:58 and 03:04 that deleted the sections on the plain packaging, and his controversial electoral technique.

Due to the number of edits, and reversions of attempts by independent editors to fix the changes, Wikipedia launched an investigation to determine who was making the changes.

Wikipedia administrator Basalisk checked what computer networks the edits were made from and found the users were working on “multiple continents”, making similar edits, and using similar tactics, such as the use of “sock-puppets”, a word for one person using multiple accounts under different names.

All of the accounts were banned indefinitely from making further edits.

“I suspect that you have a conflict of interest of some sort with the firm Crosby Textor,” the Wikipedia administrator Nick-D wrote to one of the users at the time.

“[The accounts] are single purpose accounts whose editing has almost only been to add similar positive material to and remove critical material from articles concerning the leaders of the political consultancy firm Crosby Textor.

One Crosby Textor-linked account in London rebuked a Wikipedia editor for an edit made to the page of Lynton Crosby saying: “Forcing your opinion on the wider community further damages the reputation and purpose behind Wikipedia.”

One has to ask in all seriousness which “opinions” are really being forced on the wider community, here, Mr Crosby?

Seems there’s a clear pattern of deceit, fabrication and being conservative with the truth emerging:

The Tory “A” list of “mistruths” – Austerity, socio-economic entropy and being conservative with the truth 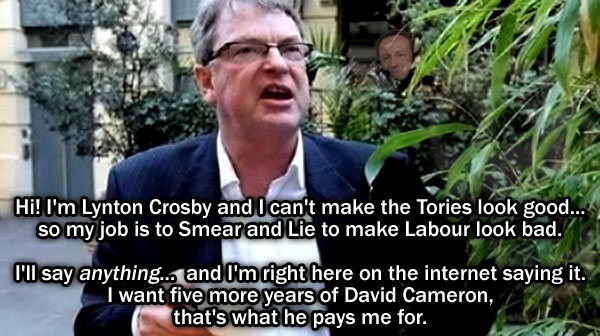 Image used with big thanks to Robert Livingstone.

Thanks also to Channel 4 News.