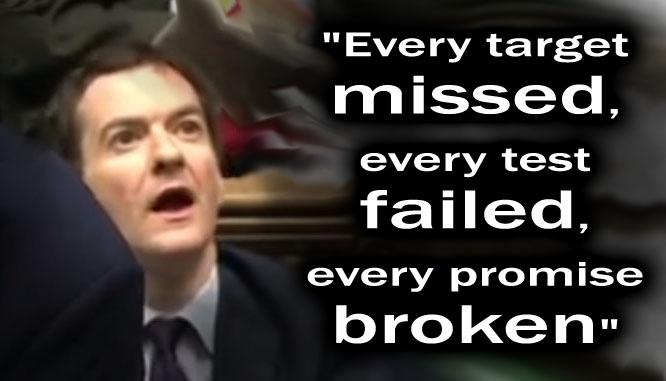 Osborne’s austerity measures have achieved nothing, except deepening poverty, widening economic inequality, and destitution for the poorest and most vulnerable communities – and Osborne announced in his Autumn statement that we face at least four more years of it.

Austerity is not an economic necessity, nor is it temporary measure to balance the books, but rather, it reflects the Conservative’s long-standing ideological commitment to dismantle the gains and achievements of the post war settlement: public services, the welfare state and the National Health Service.

The plans, according to the Treasury spending watchdog, the Office of Budget Responsibility, also presume the loss of a further one million public sector jobs by 2020, a renewed public sector pay squeeze and a further freezing of tax credits.

Robert Chote, the Office for Budget Responsibility chairman, conceded that the projections sent to him by the Treasury meant there would have to be a “very sharp squeeze” on spending in the next parliament. He added that so far the UK has seen 40 percent of the necessary cuts in this parliament and the next 60 percent would fall under the next parliament.

The chairman says that spending on public services as a share of gross domestic product is set to fall by considerably more over the next five years than it did over the last five years, accounting for the lion’s share of the shift from a budget deficit of percent of GDP to a surplus of around 1 percent of GDP. He says that spending in non-protected departments will fall from £147 billion in 2014/15 to £86 billion in 2019/20 – on top of all the cuts to spending in recent years.

With a shortfall in tax receipts set to increase the size of the deficit by £25 billion during the next parliament, the Office for Budget Responsibility said the only way Osborne could balance the books would be through shrinking the state to a level not seen since before the Second World War:

The Office for Budget Responsibility (OBR) has written an extremely critical economic forecast and analysis of the spending cuts, clearly expressing the risks that the Chancellor is running and the scale of the damage his strategy will inflict on what remains of our public services.

Key findings from the damning analysis are:

The scale of planned post-election spending cuts is severe.

“Between 2009-10 and 2019-20, spending on public services, administration and grants by central government is projected to fall from 21.2 per cent to 12.6 per cent of GDP and from £5,650 to £3,880 per head in 2014-15 prices. Around 40 per cent of these cuts would have been delivered during this Parliament, with around 60 per cent to come during the next. The implied squeeze on local authority spending is similarly severe.

The spending cuts are playing the most significant role in deficit reduction and of the tax rises Osborne introduced, it’s the most regressive (VAT) which are making the largest contribution:

So despite the cuts, the Chancellor has failed to meet any of his original targets (to have closed the structural deficit over a parliament and to have debt falling as a proportion of GDP) and it’s unlikely that his new plan can be delivered.

“On the Government’s latest plans and medium-term assumptions, we are now in the fifth year of what is projected to be a 10-year fiscal consolidation.

It remains on course to miss its supplementary target, to have net debt falling as a share of GDP in 2015-16.

On our best estimate of a like-for-like basis, borrowing is expected to be higher in the initial years of the forecast and slightly lower from 2016-17 than we thought in March. The largest single-year effect of a Government decision comes via its new assumption for total spending in 2019/20, although this does not appear in the Treasury’s table of policy decisions. This implies another cut in current spending by central government departments in that year equivalent to £14.5 billion”.

Wage growth has been very poor, which has affected income tax revenues. And growth is expected to slow after the election next year. In part, this will be because of the scale of government cuts, which of course also bring real economic risks.

“Lower wage growth has reduced our income tax forecast. The fall in unemployment is not yet pushing pay settlements up significantly.

We still expect the economy to lose momentum through 2015 – and by a little more than we thought in March – thanks to weaker external demand and the expectation that consumer spending growth will slow to rates more in line with growth in people’s incomes.

The Government’s fiscal plans imply three successive years of cash reductions in government consumption of goods and services from 2016 onwards, the first since 1948. The corresponding real cuts directly reduce GDP. The economy should be able to adjust to such changes over time, but it is unlikely to be a simple process when monetary policy is already very loose and external demand subdued.

Over the course of the next Parliament, we project that government employment will fall by 1.0 million, compared to the 0.4 million decline that we are likely to have seen over this Parliament.”

The OBR’s damning conclusion is that real wages will not be back to even the pre-recession peak within five years (as opposed to household debt which is well on track to surpass it’s previous highs).

The OBR’s critical report on Osborne’s budget plans warns us that 60 percent  of the spending cuts have not yet been implemented in this parliament, and Osborne’s planned cuts will mean that by the end of the next government,  public spending is projected to fall to its lowest level as a proportion of GDP since the 1930s. And this was a period in history when we had no public services, no NHS, no effective welfare support, no education system, no social housing, no legal aid. Those post-war provisions have formed the very foundations of our democracy.

Osborne’s Autumn Statement has revealed that the Conservative mission to shrink the State will be complete by the budget of 2019/20 if their current budget plans remain unchallenged, and if the Conservatives remain in office.

They must not be permitted to inflict any further damage on the foundations of our once democratic society. We must ensure that they don’t.

From the Independent – The Autumn Statement: 4 charts that show how badly George Osborne has got it wrong:

GDP growth has been much lower than forecast in 2010

Government borrowing has been considerably higher every year

Wages have also grown much less than expectations four years ago

In the Autumn statement, the growth forecast for 2014 is likely to be, finally, in line with the 2010 forecast, at around three percent. But the forecast for public borrowing for 2014-15 is expected to be remain close to £100bn, meaning the deficit will remain stuck in cash terms. If the Chancellor ever had any genuine hopes of balancing the books by the end of the Parliament, the chances of fulfilling them  disappeared long ago.

Despite facing a global recession, the Labour Government invested in our public services, and borrowed substantially less in thirteen years than the Coalition have in just three years. UK citizens were sheltered very well from the worst of the global bank-induced crash.

Gordon Brown got it right in his championing of the G20 fiscal stimulus, agreed at the London summit of early April 2010, which was a continuation of his policies that had served to steer the UK economy out of the consequences of a global recession, and to protect citizens from the consequences.

Osborne’s policy of imposing austerity and budget cuts on an economy that was actually recovering was a catastrophic error. The austerity cuts have propelled the economy backwards and into depression; and, far from using public spending as a countervailing force against the cutbacks in private sector investment, the Coalition’s budget cuts served to aggravate the crisis. Many people are suffering terribly as a consequence, many  have been reduced to a struggle for basic survival.

People have died as a direct consequence of the austerity cuts.

Further cuts to provisions, services and welfare – support for the poorest – is unthinkable and untenable.

Update: The Institute for Fiscal Studies (IFS) have also agreed with this analysis. In their report, they say: “The Autumn Statement means the UK is set for cuts on a colossal scale. One thing is for sure. If we move in anything like this direction, whilst continuing to protect health and pensions, the role and shape of the state will have changed beyond recognition.”