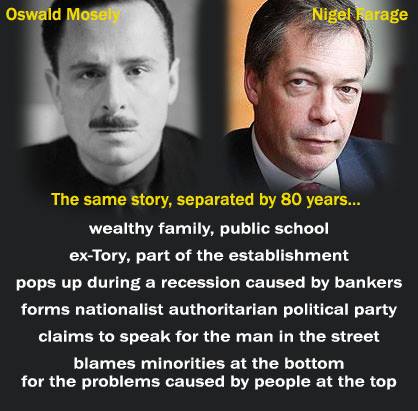 With thanks to Political Scrapbook

Accused of “pointing at immigrants and the disabled and holding his nose” on Question Time last night, Farage retorted that he “never has” criticised people with disabilities.

Yeah, Nige. Apart from in that manifesto policy document which was mysteriously deleted from the UKIP website last year.

The party claimed that 75% of incapacity benefit claimants “are fit and healthy”, dubbing them “a parasitic underclass of scroungers” and handing them a £1,300 cut in state aid:

“The welfare state has also created a brazen culture of benefit “scrounging”, whereby individuals who are perfectly capable of working refuse to do so, and go on benefits instead. They frequently justify this by feigning illness.

“This gives rise to a parasitic underclass of “scroungers”, which represents both an unreasonable tax burden on the working population

What is that if not an attack?

Not that I can ever endorse Russell Brand, either, for the reasons outlined here: Apathy and the alchemical dissolution: bring on the dancing horses

9 thoughts on “UKIP: Disability claimants are “parasitic underclass of scroungers””