From the Welfare Weekly site. 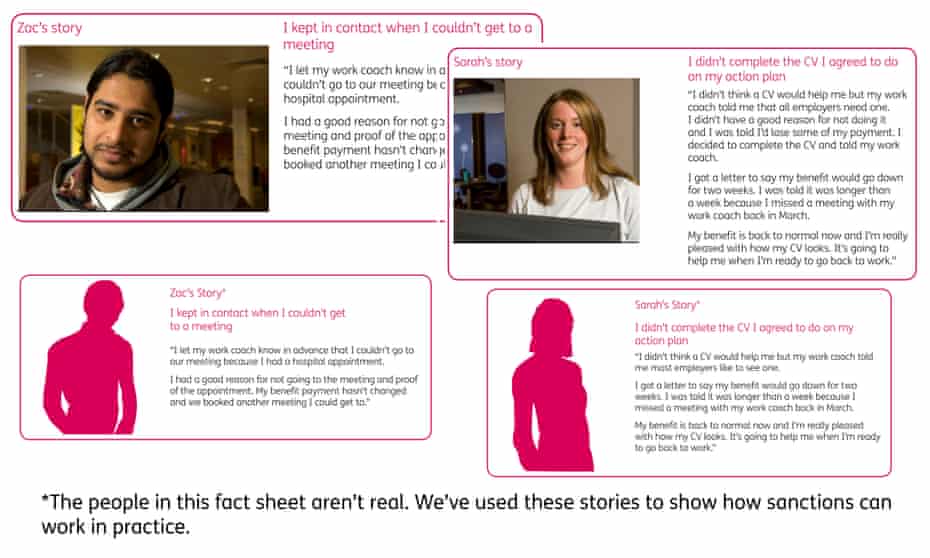 Government officials have admitted that claimant’s comments used in an official benefit sanctions information leaflet were “for illustrative purposes only”.

The revelation comes in response to a Freedom of Information (FOI) request from Welfare Weekly, in which the site authors questioned whether the comments used in the leaflet were of a genuine or fake nature.

Welfare Weekly asked the Department of Work and Pensions (DWP) to provide any evidence or information to prove that the comments used in the publication were from “genuine” claimants.

Within days of submitting their request to the DWP, the original information leaflet suddenly disappeared from the government’s website without explanation.

However, we at Welfare Weekly had already downloaded a copy of the leaflet (pdf) in anticipation of the response to our FOI request.

That leaflet included comments from two sickness benefit claimants who had supposedly been affected by benefit sanctions, Zac and Sarah.

According to the leaflet, Zac had said:

“I let my work coach know in advance that I couldn’t go to our meeting because I had a hospital appointment.

I had a good reason for not going to the meeting and proof of the appointment. My benefit payment hasn’t changed and we booked another meeting I could get to.”

While Susan had allegedly said:

“I didn’t think a CV would help me but my work coach told me that all employers need one. I didn’t have a good reason for not doing it and I was told I’d lose some of my payment. I decided to complete the CV and told my work coach.

I got a letter to say my benefit would go down for two weeks. I was told it was longer than a week because I missed a meeting with my work coach back in March.

My benefit is back to normal now and I’m really pleased with how my CV looks. It’s going to help me when I’m ready to go back to work.”

However, Welfare Weekly have revealed that neither of these comments came from genuine Employment and Support Allowance claimants.

Both comment’s were completely made up and included to “help people understand when sanctions can be applied and how they can avoid them by taking certain actions”, according to the DWP.

The response to Welfare Weekly’s Freedom of Information request reads:

“The photos used are stock photos and along with the names do not belong to real claimants.

The stories are for illustrative purposes only.

We want to help people understand when sanctions can be applied and how they can avoid them by taking certain actions. Using practical examples can help us achieve this.

We have temporarily changed the pictures to silhouettes and added a note to make it more clear that these are illustrative examples only.

We will test both versions of the factsheet with claimants and external stakeholders to further improve it in the future. This will include working with external organisations.”

The DWP have used comments and accounts that are categorically untrue in a blatant attempt to justify the use of cruel and punitive welfare sanctions, and to invalidate the experiences of genuine claimants in distress and material hardship because of sanctions. The revelation is particularly controversial because the sanctions system is causing extreme hardship, extreme psychological distress and sometimes, death, it is being operated in an unfair and arbitrary way.

Mark Serwotka, the general secretary of the PCS union, said:

“It’s disgraceful and sinister that the DWP has been trying to trick people into believing claimants are happy to have their benefits stopped or threatened. Sanctions are unnecessarily punitive and counterproductive, and should be scrapped.”

The institute that is responsible for regulating the behaviour of organisations producing public relations material – the Chartered Institute of Public Relations (CIPR) – has launched an investigation into whether any of its members were involved in producing the document of lies.

“Falsely creating the impression of independent, popular support is a naive and opaque technique which blatantly disregards the CIPR’s standards of ethical conduct. It is deeply disappointing if public relations professionals allowed it to be published.”

I’ve written at length about the adverse consequences of increased benefit conditionality and sanctioning elsewhere on this site. See Despotic paternalism and punishing the poor. Can this really be England?  This is a blatant attempt to normalise an exceptionally punitive political approach to “supporting people into work”, inappropriately using social norming – one of several nudge techniques. Another name for the psychological technique used here is frank ‘gaslighting’.

I’ve also written about the fact that we have a government formulating policy that does not address economic, structural and political causes of poverty, instead the aim is to bring about “behavioural changes” within the population – particularly amongst the poorest and the most vulnerable social groups – to suit the anti-welfare ideology of New Right Conservatism, ministers seem to have forgotten that democratically elected governments are meant to address the needs of a population, rather than the converse being true. This despicable tactic was aimed at hiding the truth: sanctions have a devastating impact on people’s lives, as the benefit being removed is calculated at a rate to meet only basic needs, such as food, fuel and shelter in the first place.

In a democratic, rights-based society, we ought to expect that the public are not stigmatised and “acted upon,” by a government using techniques of persuasion ordinarily reserved for the seedy end of advertising and marketing industry, and by the deployment of propaganda and outright lies by the powers-that-be, in order to fulfil purely ideological directives. Governments serve the public, in first-world Liberal democracies. This government serves the government.

We call a political system where the public are expected and directed to accommodate the government’s needs and wants “totalitarianism.”

Are you willing to share your experience of benefit sanctions? 38 Degrees are asking people to share their sanction stories, if you would be happy for it to be used publicly. 38 degrees will ensure all contributions are published using first names only.  Please click here to participate in the Speak Out survey and campaign. 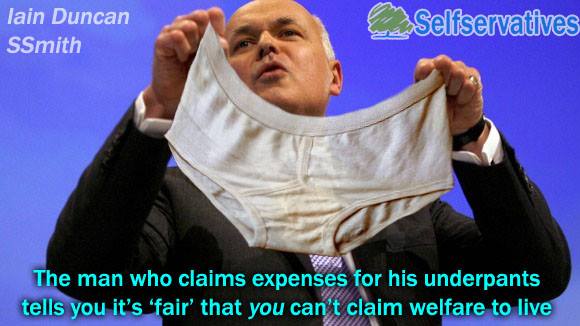 Many thanks to Robert Livingstone for the image.