We all know that the Tory welfare “reforms” are the gift that just keeps on giving. Various people from an alternative universe where benefit sanctions and starvation actually work to motivate have told us so. I think in that universe you can see Skinner and Pavlov’s house.

My recent benefit sanction really worked wonders. I was so delighted to be chosen for this special treatment by the government, and for no reason in particular. I really don’t deserve it. I have now developed spectacular superpowers as a result, and a special liking for hospital food. Every time I have a hypoglycemic attack coz I have no food, and a bout of Raynaud’s because I’ve no electricity or gas, hey presto, I get rushed into hospital where I can eat and eat until my belly is full. And there’s even heating! I couldn’t manage that with my benefit. And no worries about becoming homeless now I have a near-permanent bed. My life is transformed!

I thought I’d developed a superpower for seeing around corners as well, but it turns out that I’ve just developed a squint because I can’t afford new spectacles.

Here are some more lucky people who have been touched by extraordinary life-changing experiences through the multi-dimensional DWP:

Simon John Duffy I just wanted to share my testimony and thank the DWP for helping me to understand the true meaning of social justice. For so long I’ve simply not understood the wisdom of their policies. But now I see the light.

[You couldn’t make it up! Oh, wait, it’s the DWP, that’s what exactly they do – just make things up.] 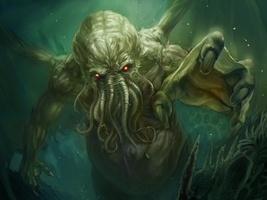 BoycottWorkfare ‏@boycottworkfare Aug 20  Cthulhu’s story: I was sleeping for aeons in the lost city of R’lyeh, until I was sanctioned. Thanks! #fakeDWPstories 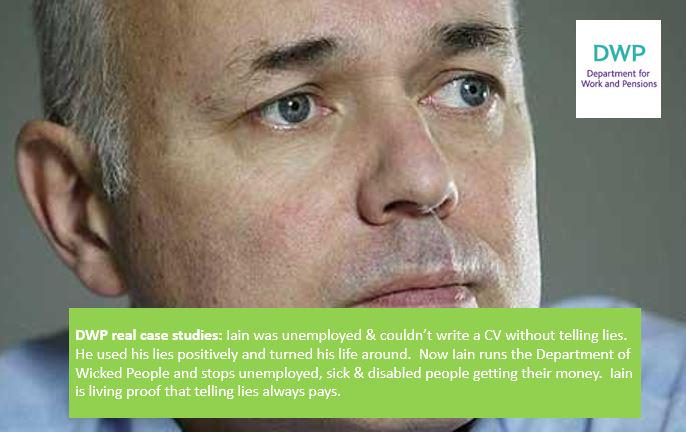 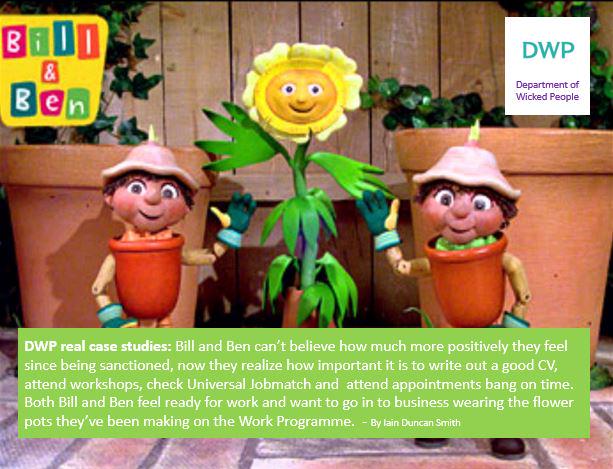 Nick ‏@Mylegalforum Aug 18  More amazing case studies from the #DWP. Bill & Ben, their story is a real example to us all! #fakeDWPstories 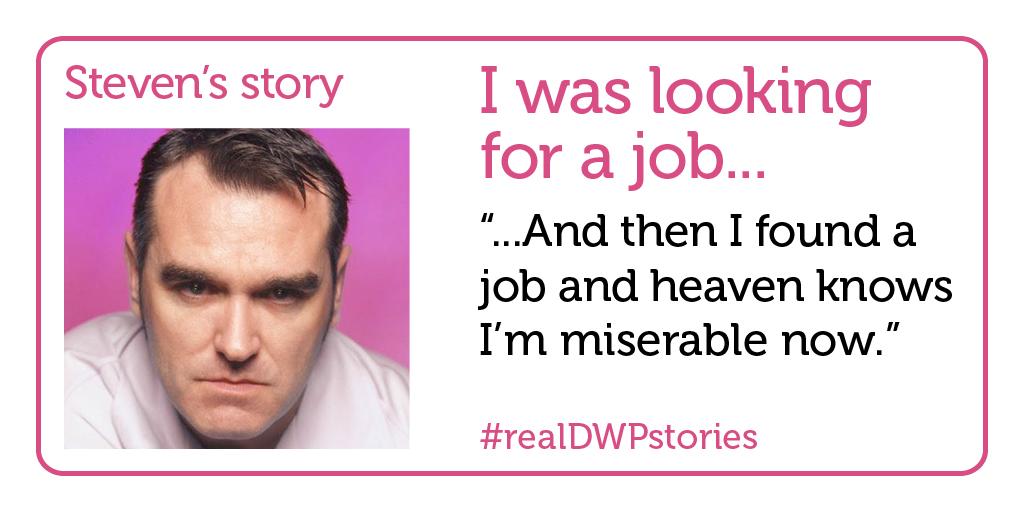 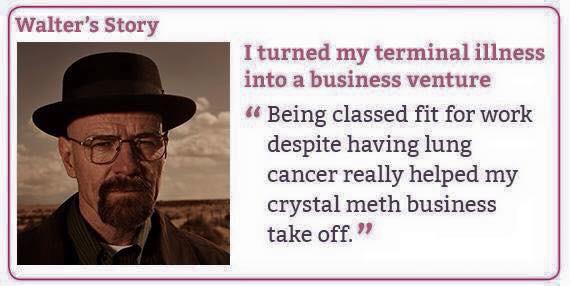 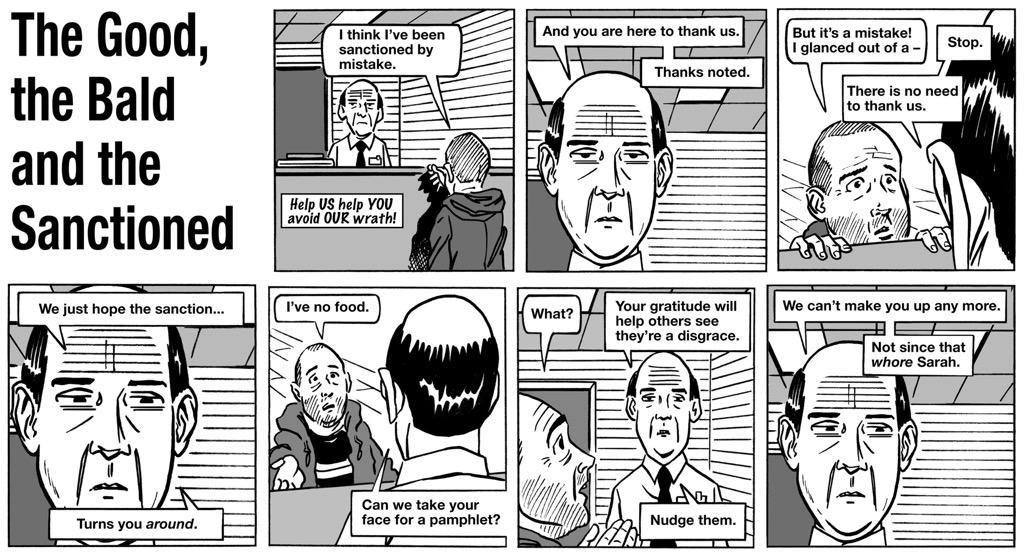 Steve Cheney ‏@RadarNvrSleeps #fakeDWPstories  Since sanctions forced me to go on the game, I have gained new confidence in my naked body! IDS is Gok Wan for povs!

Ian Jones ‏@edwinmandella Aug 18 Wargrave, England #fakeDWPstories After the DWP convinced me my brain damage was “all in my head” I have learnt to apply germoline up my nose to fix my brain. 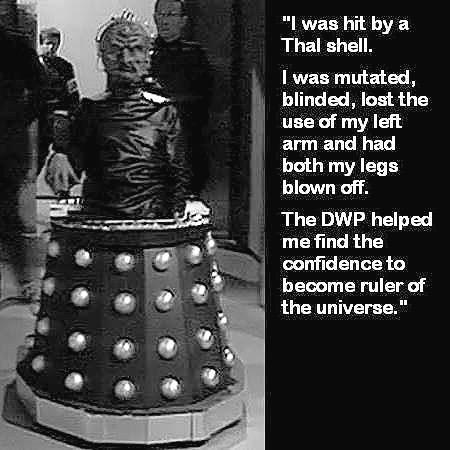 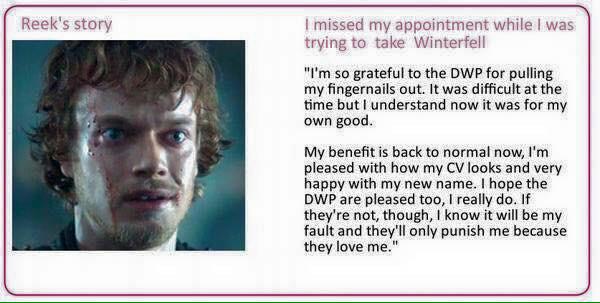 Jon Swindon ‏@swindon81 Aug 18  Without my non-intrusive Work Capability Assessment I would never have known my Parkinson’s diagnosis was merely a cold. #fakeDWPstories

And a favourite tribute to the great innovator: 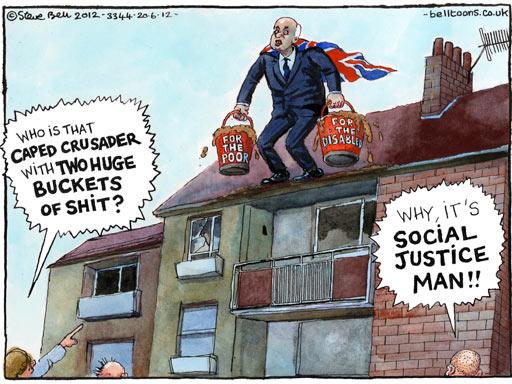 Of course, Iain Duncan Smith tells a great success story. Somewhere in the multi-verse of infinite possibilities. For example, there’s the account of his education and qualifications, as stated in his biography on the Conservative Party website, his entry in Who’s Who, and various other places, which make the claim that he went to the Universita di Perugia in Italy. In an alternative universe, unfortunately, Mr Duncan Smith’s office has been forced to explain to Newsnight researchers investigating his academic background that he didn’t get any qualifications in Perugia, or even finish his exams. His statements about the qualifications are simply examples of his remarkable superpowers. And his multi-lives and mega-talent of trans-dimensional travel.

It was also claimed that he was “educated at Dunchurch College of Management”. In fact, in this universe, Dunchurch was the former staff college for GEC Marconi, for whom he worked in the 1980s. Mr Duncan Smith’s office was said that that he did not get any qualifications there either, in this universe, but that he completed six separate courses lasting a few days each, adding up to about a month in total.

See what I mean? Extraordinary  superpowers! (See Newsnight reveals ‘inaccuracies’ in Iain Duncan Smith’s CV ). It’s easy to see why Mr Duncan Smith has made it his very own superpower campaign to “monitor” the BBC for “left-wing bias.”