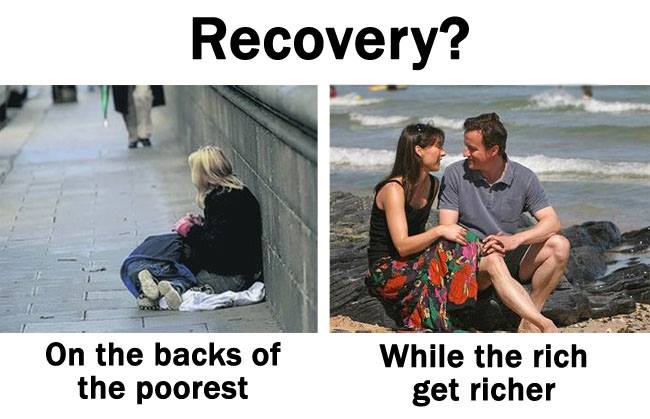 Austerity is a political choice not an economic necessity. When the Chancellor rose to his feet at the emergency Budget in July, and when he does so for his Spending Review in October, what is being put forward is an ideologically-driven rolling back of the state.

The analysis published today by the TUC reveals how the Budget gives money to the rich, but takes away from the poor.

This is the Conservative project, dressed up in the post-crisis language of budget deficits and national debt for extra impetus. Inequality doubled under the Thatcher government, and her heirs seem to be doing all they can to ensure that legacy is extended.

The Budget showed austerity is about political choices, not economic necessities. There is money available: the inheritance tax cuts announced in the Budget will lose the exchequer over £2.5billion in revenue between now and 2020. What responsible government committed to closing the deficit would give a tax break that only applies to the richest 4% of households?

The Conservatives are giving away to the very rich in inheritance tax cuts twice as much as reducing the benefit cap will raise by further impoverishing the poorest, and socially cleansing many towns and cities.

Another choice was to cut UK corporation tax to 18%, which at 20% is already the lowest in the G7, lower too than the 25% in China, and half the 40% rate in the United States.

The Treasury estimates that this political choice will see our revenue intake from big business fall by £2.5billion in 2020. That’s nearly twice the amount saved by cutting the tax credits available families with more than two children.

In such circumstances, Labour must be clear: we oppose the Budget, and we oppose austerity. As a group of 40 economists wrote to the Observer a few weeks ago, “opposition to austerity is actually mainstream economics, even backed by the conservative IMF”.

The language of “bringing down the deficit” is non-controversial, it is the method (austerity) that reveals the Chancellor’s agenda as just a cover for the same old Conservative policies: run down public services, slash the welfare state, sell-off public assets and give tax cuts to the wealthiest.

I stood in this race because Labour should not swallow the story that austerity is anything other than a new facade for the same old Conservative plans.

We must close the deficit, but to do so we will make the economy work for all, and create a more equal and prosperous society. Bringing down the deficit on the backs of those on low and average incomes will only mean more debt, more poverty, more insecurity, more anxiety and ultimately more crisis.

We must invest in a more productive economy. Our national infrastructure – energy, housing, transport, digital – is outdated, leaving the UK lagging behind other developed economies. In the Budget, the Chancellor cut back public investment even further.

You cannot cut your way to prosperity. We need to invest in our future. And that takes a strategic state that seeks to shape the economy so that it works for all.

That is the choice for Britain and the choice that Labour must offer.

Jeremy Corbyn is the Labour MP for Islington North and Labour Party leader.

This article was originally published on 7.09.15

14 thoughts on “Austerity Is a Choice, Labour Must Offer Another – Jeremy Corbyn”