In the 2010 Coalition emergency budget, David Cameron claimed that austerity measures were to be introduced only to reduce the deficit.

Doesn’t anyone else remember that since then, David Cameron stood up at a Lord Mayor’s banquet in London, in front of the financial elite, in November 2013 and ostensibly admitted – and from an ostentatious golden throne, no less – that austerity was not an emergency response to difficult economic events after all, but a permanent disassembling of the state, signalling that he had no intention of resuming public spending once the structural deficit has been eliminated.

Many of us had already recognised that the cuts were ideologically driven. But not enough of us to make a difference in May and to vote and prevent an unforgivable betrayal of future generations. It’s also a grievous betrayal of the previous generations who fought to establish universal suffrage and fought to secure the post-war settlement. Our Social Security, Legal Aid and National Health Service. These are civilising and civilised prerequisites for a fair, human rights-based first world democracy.

There was another fall in income tax receipts that sent Britain’s deficit spiralling to £12.1bn in August, the widest shortfall in government funding since 2012. So where is our money going exactly?

For a government whose raison d’etre is deficit reduction, the Conservatives aren’t very good at all. And the rigid emphasis on a series of self-imposed fiscal moving goalposts is distracting the government from the social, moral and democratic obligations it is also expected to uphold.

The Office for National Statistics said low wages and a dip in corporation tax receipts were to blame for the worsening situation, which will put pressure on George Osborne ahead of “tough” expenditure decisions due in November when Whitehall agrees its five-year spending targets.

But if you look at Conservative policies, which are designed to redistribute and privatise public wealth, it’s easy to see why this has happened.

The Conservatives regard the income of the poorest as somehow dispensable – the compensatory and disposable income of the Conservative state. Yet the very mention of raising taxes for the rich is met with shrieks of outrage and threats to leave the country. This is always justified in advance by a fresh mainstream narration of the puritan work ethic and the myth of meritocracy.

What’s yours is mine, what’s mine is my own.

What did the imperturbable chancellor promise before the election? True to Tory form, more of the same: austerity for the poor, more public services cuts, and tax breaks for the wealthiest. No mention of tax credit cuts, though, even when Conservatives were asked directly about those. Several times.

But further cuts to lifeline benefits and public services are surely untenable. Absolute poverty has risen dramatically this past four years, heralding the return of Victorian illnesses that are associated with malnutrition. People have died as a consequence of the welfare “reforms”. Supporting the wealthy has already cost the poorest so very much, yet this callous, indifferent, morally nihilistic government are casually discussing taking even more from those with the very least.

Our welfare state arose as a social security safety net – founded on an assurance that as a civilised and democratic society we value the wellbeing and health of every citizen.

There was a cross-party political consensus that such provision was in the best interests of the nation as a whole at a time when we were collectively spirited enough to ensure that no one should be homeless or starving in modern Britain.

As such, welfare is a fundamental part of the UK’s development –  our progress – the basic idea of improving people’s lives was at the heart of the welfare state and more broadly, it reflects the evolution of European democratic and rights-based societies.

A welfare state is founded on the idea that government plays a key role in ensuring the protection and promotion of the economic and social wellbeing of its citizens. It is based on the principles of equality of opportunity, equitable distribution of wealth, and both political and social responsibility for those unable to avail themselves of the minimal provisions for wellbeing.

The welfare state arose in the UK during the post-war period, and following the Great Depression, for numerous reasons, most of these were informed by research carried out into the causes of poverty, its effects on individuals and more broadly, on the UK economy. There were also political reasons for the Conservatives and Liberals supporting the poorer citizens – the newly enfranchised working class.

Charles Booth in London and Sebohm Rowntree in York carried out the first serious studies of poverty and its causes. They both discovered that the causes were structural – casual labour, low pay, unemployment, illness and old age – not laziness, fecklessness, drunkenness and gambling, as previously assumed. The poverty studies raised awareness of the extent of poverty in Britain and the myriad social problems that caused it, and that it caused.

The Boer war of 1899-1902 highlighted the general poor state of health of the nation. One out of every three volunteers failed the army medical due to malnutrition, other illnesses due to poor diet and very poor living conditions. The military informed the government at the time of the shockingly poor physical condition of many of those conscripted.

We learned that the effects of poverty were potentially damaging to  the whole of society. Health problems and infectious disease – rife in the overcrowded slums – could affect rich and poor alike. It was recognised that the economy suffered if large numbers of people were too poor to buy goods and social problems such as exploitation, debt, crime, prostitution and drunkenness were a direct result of poverty, and not the cause of it. 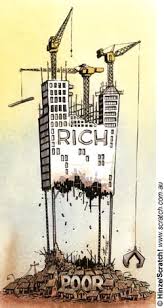 The discovery of  widespread poor health as a consequence of poverty raised concerns about Britain’s future ability to compete with new industrial nations such as Germany and the USA. National efficiency would only increase if the health and welfare of the population improved. It was recognised that welfare is about extending opportunities, not “dependency”.

At the same time, the growth of the Labour Party and Trade Unionism presented a threat to the Liberals and the Conservatives. The new working class voters were turning to these organizations to improve their lives. The traditionally laissez-faire Liberals recognised this and supported the idea of government support for the working class.

Yet since 2010, there’s been an unprecedented, historic assault on the very ideal of social security, and it’s sustained and systematic: it didn’t stop with the 2012 welfare cuts.

As I’ve said elsewhere, welfare has been redefined by the Conservatives: it is pre-occupied with assumptions about and modification and monitoring of the behaviour and character of recipients, rather than with the alleviation of poverty and ensuring economic and social well-being.

Policies aimed at restricting support available for families where parents are either unemployed or in low paid work are effectively class contingent policies.

The vast total of around £25bn in benefit cuts already set in motion by the chancellor brings in less than he has freely handed out in personal tax allowances, generous tax breaks, petrol duties and corporation tax cuts. To govern is to make choices. It’s worth noting that the Conservative’s “difficult choices” are resolved by targeting the same social groups, over and over.

Cuts to welfare have been offset by the cost of tax cuts higher up income scale, with no overall contribution to paying down deficit, according to an unsurprising comprehensive study of social policies.

Professor John Hills, director of the London School of Economics (LSE) Centre for Analysis of Social Exclusion, said: “Protection of some of the core parts of the welfare state from the greatest cuts, and initial protection of the value of benefits, meant that those at the bottom, and important services, were initially shielded from the worst effects of the recession.

“But in the second part of the coalition’s period, selective cuts to benefits and to unprotected services have begun to take their toll, leaving the next government … with much greater social policy challenges than the coalition inherited.”

If David Cameron had been honest and declared that his government intended to dismantle our social infrastructure; the welfare state (and yes, that means in-work benefits too), the NHS, legal aid, and to refuse to honour any meaningful legal commitment to human rights, whilst handing out the money generated from this unravelling of our civilising institutions and services, in the form of handsome rewards to feckless millionaires, would he be in office now?

The Tory mantra “Making work pay” is a doublespeak soundbite version of the 1834 Poor Law principle of less eligibility, which is founded on the atrocious idea that poverty is caused by people simply refusing to work, and it can be “cured” if it is made as unbearable as possible. People will work if they are shamed and psychologically coerced. The whole idea of less eligibility is that “workless” people have to be kept in penury to “teach” them value of the work ethic and to discourage others from becoming an “idle pauper.”

But many poor people are in work.

The tax credit cuts proposed by the Conservatives exposed the “shirker” myth for what it is: a lazy, barely coherent narrative – a cover story for an ideologically driven and increasingly irrational government that is happy to reintroduce Dickensian levels of absolute poverty so that a few rich people can increase their wealth. Punishing poor people and creating a desperate class that are prepared to work for next to nothing rather than starve on a grossly inadequate and punitive social security system serves to drive wages down further, reduces working conditions and removes constraint from private sector profit-making.

It serves to dampen down collective bargaining. It changes the relationship between employers and employees, as well as between the state and citizens, turning increasingly desperate, impoverished people into a reserve army of cheap labour.

The welfare “reforms” were never about “making work pay.”

Unless, of course, you ask “for whom, precisely?”

The Tories’ war on welfare has caused untold suffering. Here are three ways we can stop it – Tom Clark