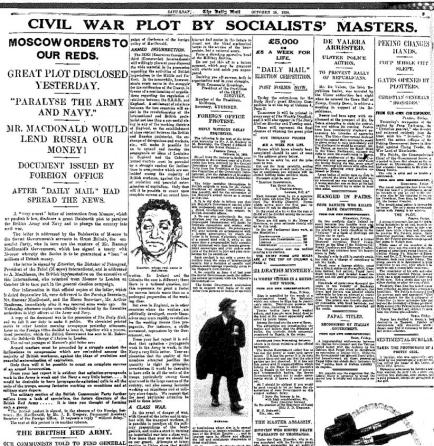 This article was originally published in the Guardian.

There was a minor kerfuffle a few weeks ago when the Daily Mail website overtook the New York Times to become the most popular news site in the world.  Liberals can whine all they like, but that’s a formidable achievement, especially considering it’s not really a conventional news site at all, more a big online bin full of pictures of reality stars, with the occasional Stephen Glover column lobbed in to lighten the mood.

The print edition of the paper is edited by Paul Dacre, who is regularly praised by media types for knowing what his customers want, and then selling it to them. This is an extraordinary skill that puts him on the same rarefied level as, say, anyone who works in a shoe shop. Or a bike shop. Or any kind of shop. Or in any absolutely any kind of business whatsoever. Whatever you think about Dacre’s politics, you can’t deny he’s got a job to do, and he does it. Like a peg. Or a ladle. Or even a knee. Dacre is perhaps Britain’s foremost knee.

Curiously, the online version of the Mail has become a hit by doing the reverse of what Dacre is commended for doing. It succeeds by remorselessly delivering industrial quantities of precisely the opposite of what a traditional Mail reader would presumably want to read: frothy stories about carefree young women enjoying themselves. Kim Kardashian or Kelly Brook “pour their curves” into a selection of tight dresses and waddle before the lens and absolutely nobody on the planet gives a toss apart from Mail Online, which is doomed to host the images, and Mail Online’s readers, who flock in their thousands to leave messages claiming to be not in the slightest bit interested in the story they’re reading and commenting on.

The Mail’s report went on to detail the results of a study carried out by a group of Canadian academics, which appears to show some correlation between low childhood intelligence and rightwing politics. It also claimed that stupid people hold rightwing views in order to feel “safe”. Other items they hold in order to feel safe include clubs, rocks and dustbin lids. But those are easy to let go of. Political beliefs get stuck to your hands. And the only way to remove them is to hold your brain under the hot tap and scrub vigorously for several decades.

As you might expect, many Mail Online readers didn’t take kindly to a report that strived to paint them as simplistic, terrified dimwits. Many leapt from the tyres they were swinging in to furrow their brows and howl in anger. Others, tragically, began tapping rudimentary responses into the comments box. Which is where the tragi-fun really began.

“Stupidest study of them all,” raged a reader called Beth. “So were the testers conservative for being so thick or were they left and using a non study to make themselves look better?” Hmmm. There’s no easy answer to that. Because it doesn’t make sense.

“I seem to remember ‘academics’ once upon a time stating that the world was flat and the Sun orbitted the Earth,” scoffed Ted, who has presumably been keeping his personal brand of scepticism alive since the middle ages.

“Sounds like a BBC study, type of thing they would waste the Licence fee on, load of Cods wallop,” claimed Terry from Leicester, thereby managing to ignore the findings while simultaneously attacking public service broadcasting for something it hadn’t done. For his next trick, Terry will learn to whistle and shit at the same time.

Not all the respondents were stupid. Some were merely deluded. Someone calling themselves “Hillside” from Sydney claimed: “I have an IQ over 200, have six degrees and diplomas and am ‘right-wing’, as are others I know at this higher level of intelligence.” His IQ score is particularly impressive considering the maximum possible score on Mensa’s preferred IQ test is 161.

Whatever the numbers: intellectual dick-measuring isn’t to everyone’s tastes anyway. Simply by highlighting his own intelligence “Hillside” alienated several of his commentbox brethren.

“If there is one person I can not stand and that is a snob who thinks they are intelligent because if they were intelligent and educated they wouldn’t be snobs,” argued Liz from London. Once you’ve clambered over the broken grammar, deliberately placed at the start of the sentence like a rudimentary barricade of piled-up chairs, there’s a tragic conundrum at work here. She claims intellectual snootiness is ugly, which it is, but unfortunately she says it in such a stupid way it’s impossible for anyone smarter than a steak-and-ale pie not to look down on her. Thus, for Liz, the crushing cycle of snobbery continues.

On and on the comments went, turning a rather stark write-up of a daft-sounding study into a sublime piece of live online performance art. A chimps’ tea party of the damned. The Mail has long been a master at trolling lefties; now it’s mischievously turned on its own readers, and the results could only be funnier if the website came with free plastic lawn furniture for them to lob at the screen. You couldn’t make it up.