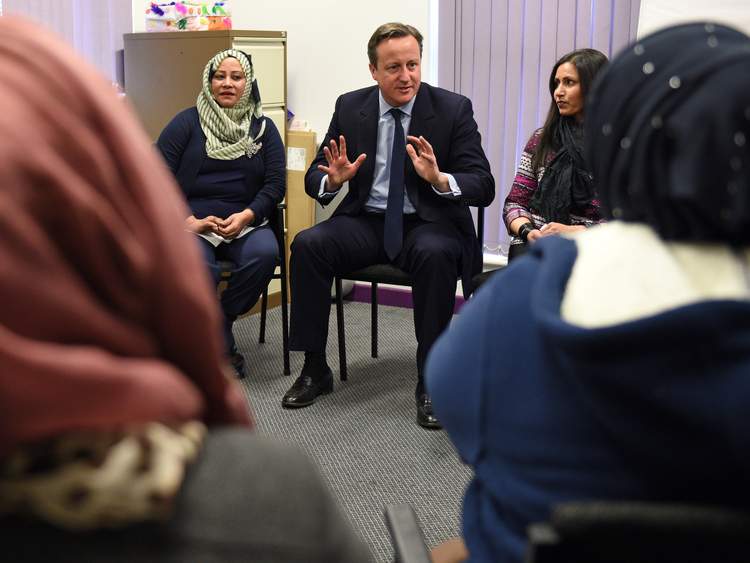 It’s emerged that journalists were blocked from interviewing the Muslim women at David Cameron’s speech about “empowering” Muslim women yesterday. Gerard Tubb, a Sky News reporter, was outraged when he was prevented from talking to the Leeds-based group of women, despite standing just a few feet away from them, whilst waiting for the Prime Minister to arrive at the meeting.

Tubb said that the lack of access to the group meant journalists would only be permitted to air propaganda from Downing Street. Other journalists were quick to point out the irony in banning media correspondents from talking to Muslim women about their reaction to Cameron’s new initiative on the day that the Prime Minsiter said he “despaired” that too many risked radicalisation because they were “isolated.” Apparently, Muslim women are to be seen and not heard.

There is a more subtle irony in the fact that an exclusively male Bullingdon club paternalist attempted to frame a political intervention in part by citing the patriarchy of another culture.

Then of course there is the broken logic of an expressed concern over impacts and barriers presented by a patriarchal culture for Muslim women, on the one hand, whilst threatening to deport them if they aren’t fluent enough in english on the other. It’s a kind of incoherence that always arises with populist authoritarian approaches to politics. It’s the sort of narrative Trump that Donald would be quite proud of.

A number 10 spokesperson insisted that Tubb was offered the chance to speak with the group’s leader, and added that “the cameras were only allowed to roll for five minutes, before the rest of their exchanges – a “private chat” – took place.”

The Conservative’s control freakery, aimed at micromanaging the media, came as Cameron outlined conservative plans to introduce english tests for people who have arrived in the UK using the five-year spousal settlement programme, in an interview with the BBC Radio 4 Today programme. He claimed that there were 38,000 Muslim women who could not speak English and 190,000 with limited skills in the language.

In his Times article on Monday, Cameron also claimed that a Pakistani-born mother at home in Bradford who can’t speak English “can help a young person’s slide towards radicalisation.” The Prime Minister has often expressed the view that multiculturism has “failed.”  At a security conference in Munich during 2011, for example, he argued the UK needed a stronger national identity to prevent people “turning to all kinds of extremism.”

Cameron said yesterday that not just Muslim women, but all those who entered the UK on the five-year spousal settlement programme would soon have to sit the language tests halfway through that period. However, Cameron has overseen steep cuts to funding for language lessons for immigrants since 2011.

Sufia Alam, the women’s project manager of the east London Maryam centre, pointed out a wide discrepancy between Cameron’s suggestion that 22% of Muslim women have limited or no English, and the 2011 census, which indicated that just 6% struggled significantly with the language. She said:

There had been deep cuts in English teaching provision for non-native speakers in the last parliament.

My issue is that community facilities – especially those aimed at women – have also faced significant cuts.

This announcement is dog-whistle politics at its best.

David Cameron cut the budget for English language classes in August last year by 45 million. Now the prime minister is dressing up a massive cut as a 20 million funding commitment.

Linking women in the Muslim community who struggle with the English language to home-grown extremism only serves to isolate the very people Cameron says he is trying to help.

Cameron went on to say:

After two and half years they should be improving their English and we will be testing them. We will bring this in in October and it will apply to people who have come in on a spousal visa recently and they will be tested.

Migrants who fail the language tests after two and a half years may be forced to leave the UK. Speaking later in Leeds, where he visited a mosque and a women’s centre, the Prime Minister said:

The evidence is that there are some 40,000 women in our country who really don’t speak any English at all and, perhaps altogether, some 190,000 with very poor English.

I think it’s quite right to say to people who come to our country that there are many rights that you have here – it’s a fantastic country to live in – but there are also obligations that we should put on people who come to our country, and chief amongst them should be obligations to learn English because then you can integrate, you can take advantage of the opportunities here and you can help us to build the strong country that we want.

Lady Warsi, the Conservative former party chairman, has joined Labour and the Liberal Democrats in criticising Cameron for linking failure to speak English with radicalisation.

The Prime Minister said that Muslim women need to learn English – but many say he needs to be more careful with his own language. Rather than “empowering” women, Cameron has probably been instrumental in stigmatising them, and in the further alienation of Muslim communities.

Andy Burnham, the shadow home secretary, said that Cameron risked “doing more harm than good in a desire to grab headlines.” He went on to say:

His clumsy and simplistic approach to challenging extremism is unfairly stigmatising a whole community. There is a real danger that it could end up driving further radicalisation, rather than tackling it.

A spokesperson for the community organisation Muslim Engagement and Development (Mend) said:

Being able to speak English is vital to economic, social and political integration, but the prime minister is making wild allegations about misogyny in Muslim communities and conflating this with issues of integration. This is not helpful; we need positive interventions not misplaced, tendentious rhetoric.

When has Cameron acted to address workplace discrimination and the exclusion of minorities from the political sphere? It has become all too common in recent years for the government to point the finger of blame on Muslims and tell them to do more. It’s time the government took a long hard long look at its failings on integration – economic, social and political – and started offering solutions. 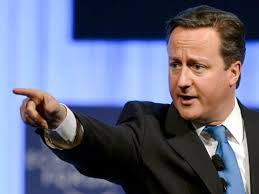 4 thoughts on “Journalists blocked from Cameron’s meeting yesterday: apparently Muslim women are to be seen and not heard.”