I was asked in 2011 by an Atos assessor how long I thought I would have a “chronic, progressive illness”.  Medical testing had confirmed I have connective tissue disease (lupus). That was the diagnosis from my rheumatologist, which she read aloud at the assessment, from a correspondence between my consultant and my GP. Dumbfounded, I replied:

“Until I die. The clue is in the words ‘progressive’ and ‘chronic’.”

But an essential failure to grasp what words like “chronic”, “degenerative” and “progressive” actually mean isn’t peculiar to state assessors of illness and disability, who work for the government specifically to reduce the number of people eligible for sickness benefits. Government ministers display the same level of purposive ignorance: 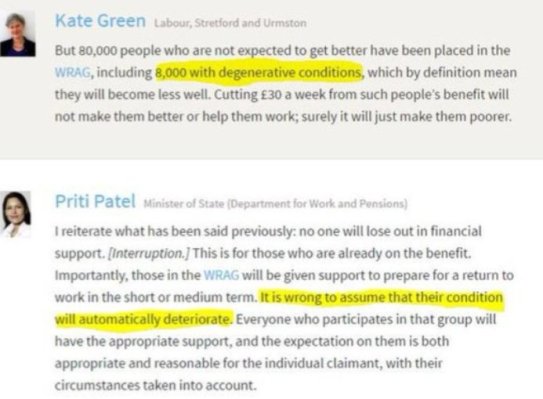 This is why we don’t visit the government rather than a doctor when we become ill, especially when the state thinks it knows best about our medical conditions and how we should address those – and clearly doesn’t. This is about irrational ideology-driven policies aimed at cutting  back the welfare state. Regardless of how unreasonable that is and regardless of the consequences for those needing social security.

This paragraph from Frances Ryan’s latest article- an interview with a claimant called Phil Brehaut- just says it all.

“It was very daunting, like being in court,” he says. “The lady on the panel actually asked me, ‘How long are you likely to have Parkinson’s?’” He pauses. “The person next to her quickly whispered in her ear … You would think they’d know a little bit about it.”

16 thoughts on “Benefits Assessor: How Long Are You Likely To Have Parkinson’s?”