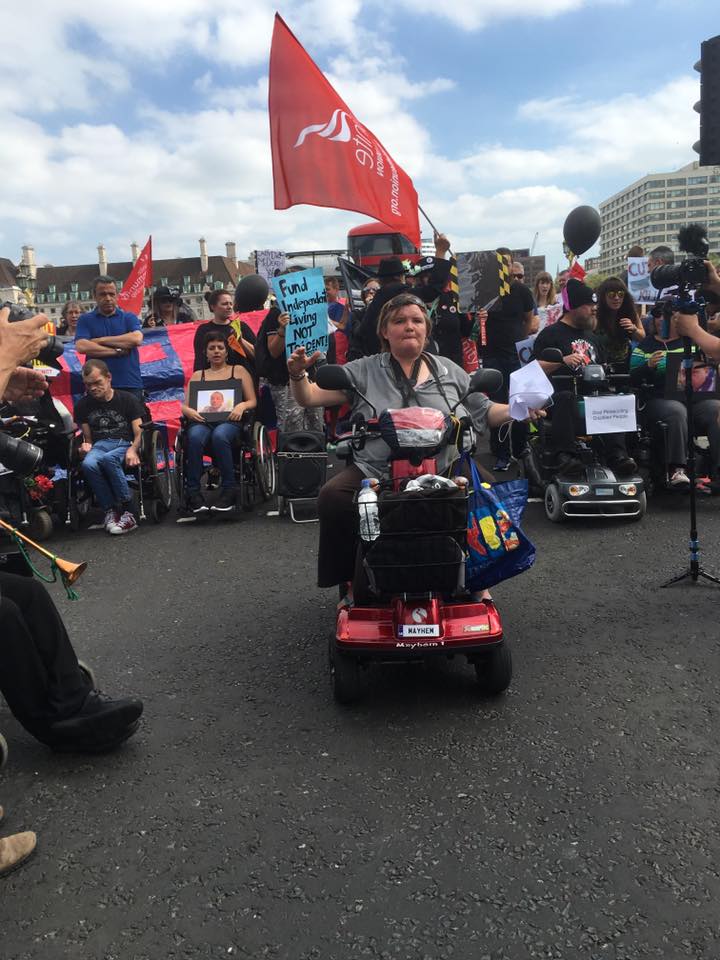 The work and pensions secretary, Damian Green, has dismissed the highly critical UN report that concluded that the UK government’s austerity policies “systematically violated” the rights of disabled people.

Green said the report was “patronising and offensive” and presented an outdated view of disability in the UK. He said Britain was “a world leader in disability rights and equality”.

But disability activists and charities welcomed the report, saying it accurately highlighted the real economic and social pressures faced by disabled people after years of harsh spending cuts to social security and social care.

The shadow work and pensions secretary, Debbie Abrahams, said the UN report was “crystal clear” in its identification of UK government failures. “It confirms that, despite Theresa May’s warm words, this government is failing sick and disabled people,” she said.

The UN committee said a range of measures introduced since 2010, including the bedroom tax and cuts to disability benefits and social care budgets, had disproportionately and adversely affected disabled people.

Government ministers contributed to the inquiry that led to the report and are understood to have been presented with the findings earlier this year.

Green said: “At the heart of this report lies an outdated view of disability which is patronising and offensive. We strongly refute its findings. The UN measures success as the amount of money poured into the system, rather than the work and health outcomes for disabled people. Our focus is on helping disabled people find and stay in work, whilst taking care of those who can’t.”

The government said it spent about £50bn a year to support sick and disabled people – a bigger proportion of GDP than countries including Canada, France and the US.

It said the recent publication of its work and health green paper, which included ambitious proposals to increase employment levels among disabled people, was “a turning point in our action to confront the attitudes, prejudices and misunderstandings within the minds of employers and across wider society.”

But Abrahams said the report echoed warnings Labour had been making since 2011 about the effects of the government’s policies on disabled people.

“The UN committee is clear that its report examines the cumulative impact of legislation, policies and measures adopted from 2010 to October 2016, so the government’s claim that it is outdated does not stand up to scrutiny.

“I am also concerned that the government is labelling the report as patronising, when they are the ones dismissing the concerns raised by disabled people who helped instigate the inquiry in the first place.”

Vicki Nash, head of policy and campaigns at the mental health charity Mind, said the UN findings were extremely concerning but came as no surprise.

“The government has ambitions to help many more people with mental health problems back into work but, as this inquiry points out, the current approach is cruel, inappropriate and doesn’t work.”

“Britain’s own joint parliamentary committee on human rights warned of the risks to disabled people’s human rights that would result from the combined effect of reform and spending decisions in 2012. After extensive research and consultation, the UN committee has found that these risks have come to pass.

“With further cuts to social security still to come and no plans for additional investment in social care, it seems likely that things are only going to get worse. The government’s complacent response offers little reassurance to the contrary.”

Dan Scorer, head of policy at Mencap, said: “This report is further acknowledgement that cutting disabled people’s benefits will only make life harder and isolate people further from inclusion in employment and wider society. People with a learning disability face massive exclusion from the labour market, and have seen their benefits and funding for vital social care services reduced.”

Michelle Mitchell, chief executive of the MS Society, said: “This is yet more evidence that there’s a clear need for changes to disability benefits. The system is currently failing too many people with MS.”

The inquiry report was based on an 11-day tour of the UK undertaken by two UN envoys in October 2015. The inquiry team met more than 200 individuals, including officials and MPs as well as activists and academics.

The UK has been a signatory to the UN convention on the rights of people with disabilities since 2007. The convention includes articles on the right to live independently, to work and to enjoy social protection without discrimination on the basis of disability.

Damian Green: “Their [UN and stakeholder’s] evidence period runs up until the end of 2015, so it is already out of date. We intend to point out that the UK spends around £50 billion a year on benefits to support disabled people and people with health conditions, which is over £6 billion more than in 2010.”

Sue Jones: “Exactly how much of that spending has gone to those people needing essential support, and how much has been spent on contracting private companies, ironically to save money and cut support for disabled people, in order to “target” the ever-shrinking category of “those most in need”?

And given that the government’s track record up until the end of last year indicates that ministers have been atrociously negligent in observing the human rights of disabled people, how do the more recent cuts to ESA, and proposals set out in the work, health and disability green paper remedy that, precisely?”

Initial thoughts on the work, health and disability green paper

1. Report of the Inquiry Concerning the United Kingdom of Great Britain and Northern Ireland carried out by the Committee under article 6 of the Optional Protocol to the Convention

2. Observations of the Government of the United Kingdom of Great Britain and Northern Ireland on the report of the Inquiry carried out by the Committee under article 6 of the Optional Protocol to the Convention

I don’t make any money from my work. But you can support me by making a donation and help me continue to research and write informative, insightful and independent articles, and to continue to provide support to others. The smallest amount is much appreciated – thank you.