Government denies that NHS and social care cuts may have caused 30,000 excess deaths in England and Wales 2015.

An unprecedented rise in mortality in England and Wales, where 30,000 excess deaths occurred in 2015, is likely to be linked to cuts to the NHS and social care, according to research which has drawn an angry response from the government.

The highly charged claim is made by researchers from the London School of Hygiene & Tropical Medicine, Oxford University and Blackburn with Darwen council, who say the increase in mortality took place against a backdrop of “severe cuts” to the NHS and social care, compromising their performance.

(The report can be accessed here: Why has mortality in England and Wales been increasing? An iterative demographic analysis.)

The Department of Health (DH) responded by accusing the authors of the paper and accompanying commentary, published in the Journal of the Royal Society of Medicine on Thursday, of “bias”.

The researchers ruled out other possible causes of the increase, including cold weather, flu and the relatively low effectiveness of the flu vaccine that year, noting that fatalities from the virus rose “but not exceptionally”.

After examination of NHS performance data for the period, which shows the service missing almost all its targets, they concluded: “The evidence points to a major failure of the health system, possibly exacerbated by failings in social care.”

The rise in deaths from 2014 to 529,655 in 2015 was the biggest in percentage terms in almost 50 years and the mortality rate was the highest since 2008. The excess deaths were largely among older people who are most dependent on health and social care, the authors said.

The research further warned that the “spike” was showing signs of becoming an established pattern, with provisional official weekly mortality data from 2016 showing deaths from October onwards increasing by 7% compared with the five-year average.

While accepting their findings would generate controversy, the authors expressed surprise that the rise and the reasons for it had not previously been scrutinised.

Professor Danny Dorling from the University of Oxford said: “It may sound obvious that more elderly people will have died earlier as a result of government cutbacks, but to date the number of deaths has not been estimated and the government have not admitted responsibility.”

The researchers observed that the increase in mortality came as waiting times rose in A&E departments – despite unexceptional attendances – for admissions, diagnostic tests and also consultant-led care. Ambulance response times also increased as did operations cancelled for non-clinical reasons. Staff absence rates rose and more posts remained empty as staff had not been appointed.

The authors said health service austerity had been exacerbated by £16.7bn of cuts to the welfare budget and a 17% decrease in spending for older people since 2009, while the number of people aged 85 and over had risen almost 9%.

See: Age-standardised death rates per 100,000 population for all ages

Barbara Keeley, the shadow social care minister, said: “The Tories have created a crisis in social care. They have cut billions of pounds from council budgets and care is suffering as a result.

“In the March budget, the government must provide extra funding urgently and deliver a sustainable settlement to deal with the crisis in health and social care.”

The Liberal  Democrat leader, Tim Farron, called it “a national scandal that in one of the richest countries in the world, vulnerable older people are missing out on the services they need and may even have died due to poor care”.

The report’s co-author, Dominic Harrison, the director of public health at Blackburn with Darwen council, said the research “raises a red flag that is telling us that the health and care system may have reached the limits of its capacity to safely and effectively care for the population that funds it. Our analysis suggests that the most likely cause of that failure, when all other possible explanations have been excluded, is insufficient resources and capacity”.

The paper will make uncomfortable reading for the government at a time when it is under substantial pressure to boost spending for both the NHS and social care amid fears they are at breaking point.

See: Number of patients spending more than 12 hours from decision to admit to admission

A Department of Health (DH) spokesman described the study as “a triumph of personal bias over research”. He added: “Every year there is significant variation in reported excess deaths, and in the year following this study they fell by nearly 20,000, undermining any link between pressure on the NHS and the number of deaths. Moreover, to blame an increase in a single year on ‘cuts’ to the NHS budget is arithmetically impossible given that budget rose by almost £15bn between 2009-10 and 2014-15.”

The fall the DH refers to is the reduction in excess winter deaths, which compares those between December and March with those in the rest of the year. Excess deaths over the year are measured relative to the average in recent years.

Harrison said the point the authors were making was that in months such as January 2015, which saw a spike in deaths, there was an insufficient service response to a surge in demand. He termed this a “fail event” and warned there could be recurrences over the next five years without a rise in funding. He added that preliminary figures pointed to a possible significant increase in excess deaths last month.

“I have few doubts that our findings will be strongly contested,” he said. “This report has been published in good faith in a peer-reviewed academic journal by senior health professionals who are concerned to understand the causes of avoidable death in the population – precisely so that we can avoid it happening again.” 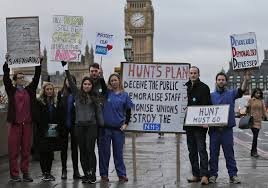 Public health experts from Durham University have denounced the impact of Margaret Thatcher’s policies on the wellbeing of the British public in a comprehensive study which examines social inequality in the 1980s.

The study, which looked at over 70 existing research papers, concludes that as a result of unnecessary unemployment, welfare cuts and damaging housing policies, the former prime minister’s legacy includes the unnecessary and unjust premature death of many British citizens, together with a substantial and continuing burden of suffering and loss of wellbeing.

The research shows that there was a massive increase in income inequality under Baroness Thatcher – the richest 0.01 per cent of society had 28 times the mean national average income in 1978 but 70 times the average in 1990, and UK poverty rates went up from 6.7 per cent in 1975 to 12 per cent in 1985.

Baroness Thatcher’s governments wilfully engineered an economic catastrophe across large parts of Britain by dismantling traditional industries such as coal and steel in order to undermine the power of working class organisations, say the researchers. They suggest this ultimately fed through into growing regional disparities in health standards and life expectancy, as well as greatly increased inequalities between the richest and poorest in society.

Professor Clare Bambra from the Wolfson Research Institute for Health and Wellbeing at Durham University, co-author of the research report, commented:

“Our paper shows the importance of politics and of the decisions of governments and politicians in driving health inequalities and population health. Advancements in public health will be limited if governments continue to pursue neoliberal economic policies – such as the current welfare state cuts being carried out under the guise of austerity.”

Thatcher’s policies  have been condemned for causing “unjust premature deaths.” Cameron’s policies are even more class-contingent and cruel.

I don’t make any money from my work. But you can help me continue to research and write informative, insightful and independent articles, and to provide support to others by making a donation. The smallest amount is much appreciated – thank you.

15 thoughts on “Health cuts most likely cause of steep rise in mortality, government in denial”