I reported last week that the Liberal Democrats were planning an Early Day Motion (EDM) to halt the government’s authoritarian Personal Independence Payment (PIP) regulations. The new regulations are designed by the government to disregard the rulings of two upper tribunals regarding the scope of eligibility criteria for disabled people claiming PIP. However, upper tribunals are part of a body of administrative law that governs the activities of the administrative agencies of government. It is designed to independently review the decisions of governments, and as such, it provides protection and promotion of fundamental rights and freedoms for citizens.

The Upper Tribunal is a superior court of record, giving it equivalent status to the High Court and it can both set precedents and can enforce its decisions (and those of the First-tier Tribunal) without the need to ask the High Court or the Court of Session to intervene. It is also the first (and only) tribunal to have the power of judicial review. (The Conservatives have a historical dislike of judicial review. See for example: The real “constitutional crisis” is Chris Grayling’s despotic tendencies and his undermining of the Rule of Law.)

It says: “That an humble Address be presented to Her Majesty, praying that the Social Security (Personal Independence Payment) (Amendment) Regulations 2017 (S.I., 2017, No. 194), dated 22 February 2017, a copy of which was laid before this House on 23 February, be annulled.”

From 1 April 2017, further cuts to Employment and Support Allowance (ESA) are to be introduced, again via statutory instrument (which are usually reserved for non-controversial policy amendments only). The new regulations mean that claimants who are placed in the Work-Related Activity Group (WRAG) will lose around £30 a week, receiving the same rate of payment as those claiming Jobseeker’s Allowance and the equivalent in Universal Credit.

Another EDM was tabled by the Labour Party, with the primary sponsor being Jeremy Corbyn, which says: “That an humble Address be presented to Her Majesty, praying that the Employment and Support Allowance and Universal Credit (Miscellaneous Amendments and Transitional and Savings Provisions) Regulations (S.I., 2017, No. 204), dated 23 February 2017, a copy of which was laid before this House on 27 February, be annulled.” 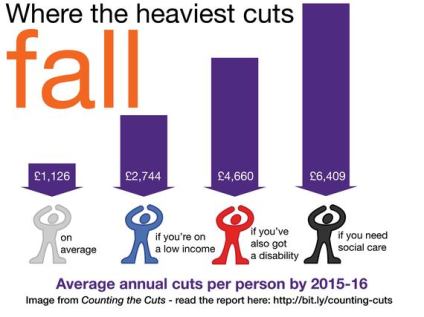 The cuts to disability support have been widely opposed, yet the government apparently pays little heed to the need for democratic accountability.

You can support disabled people who are being targeted by ever-increasingly punitive Conservative policies that are having an extremely damaging impact on us by emailing your MP and asking them to sign both EDMs. (Contact details here).

The government need to learn about the link between correlation and causality. Denial of culpability is not good enough.

A Critique of Conservative notions of “Social Research”

I don’t make any money from my work and I have limited income due to illness. But you make a donation and help me continue to research and write free, informative, insightful and independent articles, and to provide support to others. The smallest amount is much appreciated – thank you.

7 thoughts on “Two EDMs have been tabled to stop Tory cuts to disability support, with cross-party endorsement”