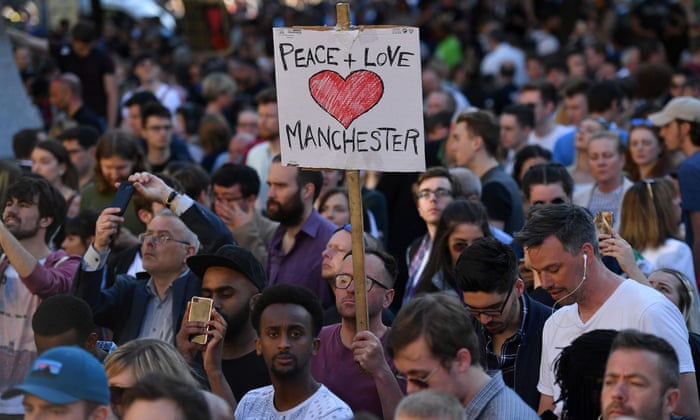 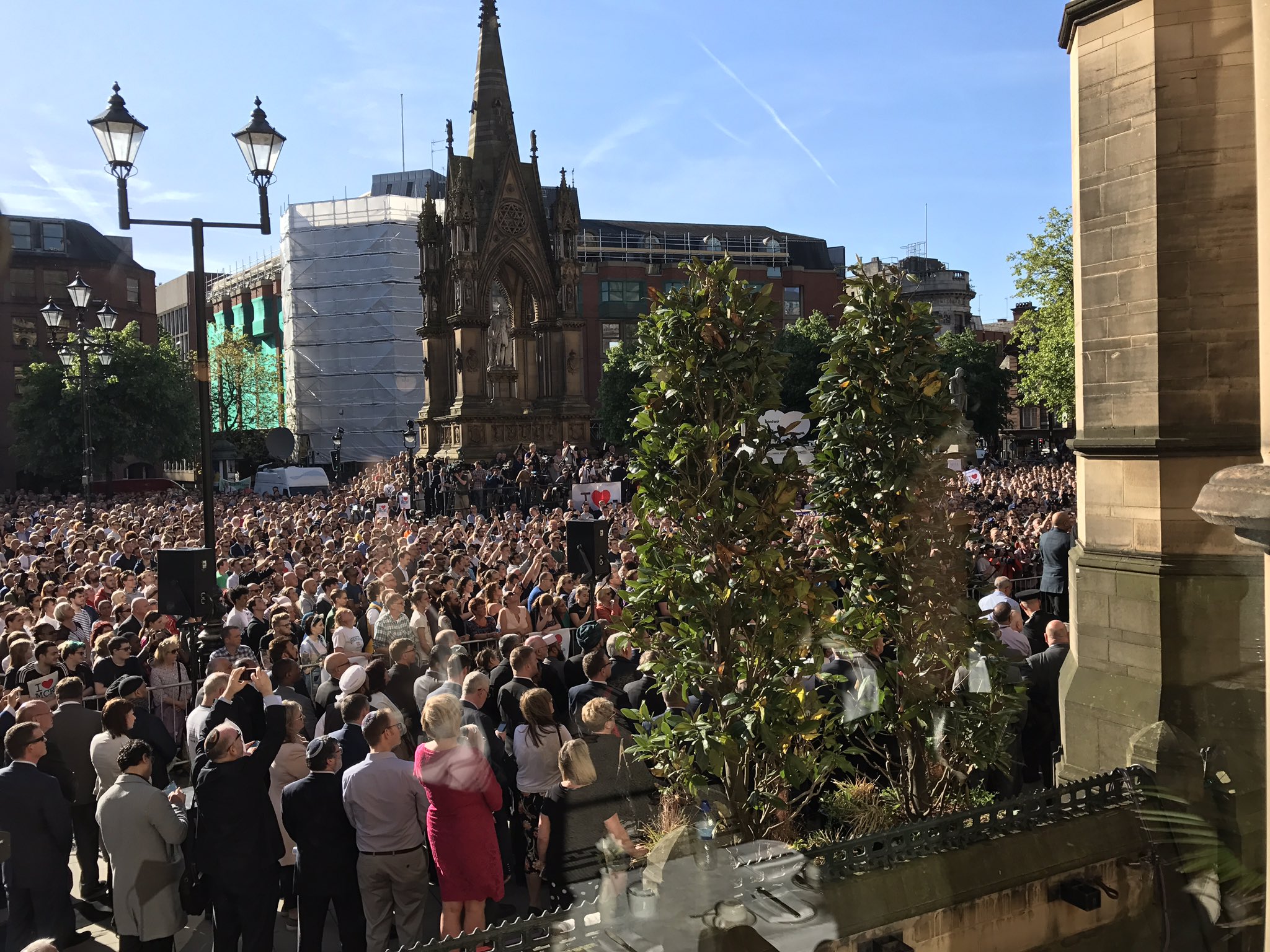 People attend a vigil in Albert Square, Manchester, in solidarity with those killed and injured in the terror attack. Photograph: Ben Stansall/AFP/Getty Images

Like many others, I am shocked and horrified at the events in Manchester last night. I cannot begin to imagine the pain and suffering of those people at the Arena who were witnesses or directly affected by such an unthinkable, utterly senseless and despicable act of terrorism – one that resulted in the terrible and senseless murder of at least 22 people, while injuring at least 120 others, many of whom were children and young people – and my thoughts are very much with the victims and their families at this incredibly painful and difficult time.

I’m suspending my own political campaigning, as a mark of respect for those we have lost, for those still coming to terms with this brutal and tragic event, and because it’s a time of bewilderment, shock and anguish for our nation. Terrorism is calculated to generate a much wider degree of national hurt and international anxiety in the longer term, in addition to the immediate horror of those targeted victims that it so brutally and despicably claims.

It was in the most horrific and atrocious circumstances that the people of Greater Manchester showed the world how much humanity and generosity they have – how much they care for each other. Many were prepared to go out of their way to help those in need. Bless those many who have helped out, offering food and water, warm drinks, offering lifts, putting people up. That reflects the kindness, good will, spirit and solidarity of Manchester. And I’ve heard some tremendously heartening stories of doctors and nurses going into work to support and police officers, ambulance workers giving up their days off, turning up to help those in need.

Among those rushing to help was a brave homeless man – Chris Parker – who has spoken of the moment when a woman died in his arms after he rushed inside Manchester Arena to help the victims of the terrorist attack. He was in the foyer at the time of the attack and was knocked to the floor with the force of the explosion, despite this, he ran inside the building to help the victims.

As Mayor Andy Burnham‏ said of the strong community spirit in Manchester: “Together we stand strong in these difficult times.”

It’s a time of national unity, solidarity, and of hugging your own family a little closer than usual – a time of drawing together in defiance of the hurt and confusion inflicted on us by those who would damage our society.

Burnham, the newly elected mayor of Greater Manchester, spoke very well following the catastrophic event – as did local commentator Mohammed Shafiq, who was very mindful of the need for a Muslim voice of condemnation of terrorism.

Poet Tony Walsh added his voice in tribute to the spirit of Mancunians and the history of the city:

Watch Tony Walsh’s passionate recital of his powerful poem for Manchester – “This is The Place” – at the vigil held in Manchester this evening.

Yet in the face of pleas for unity, there inevitably comes the opportunist politicking, those willing to search for scapegoats, which makes social unity so much harder to achieve. Those toxic voices that are known for their divisive rhetoric have already used these terrible events and the tragedies of others to stir up emotions and extend a socially corrosive brand of nationalism – the public peddling of indecency to their own pecuniary or political advantage. We need to take the media megaphone from those who use it to inflame social tensions, ethnic nationalism and drive rage-led ideologies.

Hugh Muir says in the Guardian: “There is all-pervasive incivility in this angry age of illiberalism and social media – that, as democrats, we have to stomach. There are those who would attack us with bombs and knives. We expect nothing from them but nihilism and brutality. But a society undermined from within at a time of crisis needs champions unequivocally prepared to protect it. We elect and employ such people. It is their job, and they should leave no doubt that they will do it.”

The article – The rule of law applies to everyone. Even hate peddlers like Katie Hopkins – is well worth a read. He’s talking a lot of sense at a time when a senseless and despicable act has led to widespread uncomprehending horror and national uncertainty.

We mustn’t let this catastrophic event lead to further catastrophic social divisions, by allowing established right wing demagogues to stir up and direct national anger and hatred. We must not permit such people to use other people’s grief as an opportunity to further their own political agenda.

Mehdi Hasan, writing for the Intercept, voices a perspective I also share: “Then there is Tommy Robinson, former leader of the far-right English Defence League (think of a British Richard Spencer but, again, with a lesser intellect and a long history of criminality and violence). Robinson arrived in Manchester on Tuesday to accuse British Muslim residents of that city of being “enemy combatants.” They want to “kill you, maim you and destroy you,” he told his YouTube audience of fellow far-right bigots.

You can almost hear them cheering in Raqqa. ISIS wants to drive a wedge between Muslim communities and wider Western society; it wants to pit Muslims against non-Muslims. Nor is this a secret: The group’s leaders have admitted as much in their own publications. More than two years ago, in February 2015, the ISIS online magazine, Dabiq, made clear that one of the main goals of the group’s brutal attacks in the West was to destroy the “gray zone” — of peaceful co-existence between Muslims and non-Muslims — and provoke a backlash. “The Muslims in the West will quickly find themselves between one of two choices, they either apostatize and adopt the [infidel] religion … or they … [emigrate] to the Islamic State and thereby escape persecution from the crusader governments and citizens.”

This ISIS grand plan has always required the (perhaps unwitting) support of the group’s useful idiots in the West, the Islamophobes, whose harsh rhetoric and actions help drive marginalized and alienated Muslims into the wide open arms of the jihadists.”

Robinson’s bigotry isn’t confined to Muslims. He also likes to direct abuse at people if they are remotely politically left leaning. Especially women. I’ve had first hand experience of his apparently indefatigable inclination to incite hatred and subsequent schadenfreude, as apparently, I’m a “leftist”.  It’s all our fault, he claims. He also likes to give out people’s personal and social media account details on a very widely shared and malicious meme that invites the far right in its entirety to say what they think of a so-called quote (that wasn’t). Of course these “thoughts” included death threats, rape threats, threats from Combat 18, and threats directed at my children. For someone who objects such a lot about his own “free speech” being “restricted”, he sure puts considerable effort into trying to shut other people up with low-life threats and intimidation. He also likes to get others to do his dirtiest work.

Mehdi goes on to say: “As my colleague Murtaza Hussain has observed, it is “perverse and counterproductive to lump [the West’s Muslims] together with ISIS and blame them for the group’s actions.” To do so is to “grant the Islamic State a propaganda coup, implicitly endorsing the group’s narrative of Muslims and Westerners collectively at war with one another.”  (See the full article – Reactions to Manchester Bombing Show How Anti-Muslim Bigots Are “Useful Idiots” for ISIS.)

A little of what I know about Manchester

I’m from Greater Manchester, though in the olden days of my childhood, my hometown – Bolton – was situated in Lancashire. Manchester is a city I have spent a lot of time in: it’s a city I love. Manchester is just 10 or 15 minutes away from Bolton on the train.

I used to work in the district of Chorlton. I spent my teen years going to concerts and gigs around the city. I saw many bands and performers in Manchester over the years, from Jon Otway and John Cooper Clarke to Pink Floyd, Alice Cooper, Hawkwind, PIL, Elvis Costello, A Certain Ratio and so many others. My own band – Oh no, it’s them again – played gigs around the city, once supporting the Salford Jets at the Gallery.

Over recent years, I have taken colleagues down to Manchester just for a night out. We stayed at the local Premier Inn. I was back in Manchester last October, speaking at a psychology conference in Ardwick Green (north). Afterwards I visited and stayed with my son in my home town, Bolton. It’s always been a unique, warm and wonderful city, people are always very friendly and helpful there.

I’m horrified and shocked at the events of last night, and feel so very sorry for those who were there, the terrible and heartwrenching loss of life, the injured young people and adults. My thoughts are with those families, and my heart goes out to them.

How you can help

I used to work for Victim Support in the early 1990s.  This excellent organisation are providing immediate emotional and practical local support to victims and witnesses of the Manchester attack. You can contact Victim Support’s national support line on 0808 168 9111 or, if you live in Greater Manchester, call 0161 200 1950.

Many people have sent messages of support and comfort; the community spirit in the city region has shone through at this very sad time. If sharing information, please be sure to only share trusted information and follow @gmpolice on Twitter and Facebook for reliable updates and information.

A relief fund has been organised by Manchester City Council and the British Red Cross, you can donate here: https://www.justgiving.com/campaigns/charity/redcross/manchesteremergencyfund. 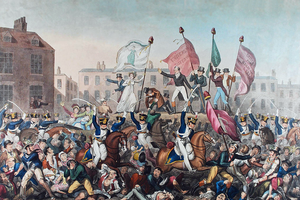 Painting showing the Peterloo Massacre – part of the history of Manchester – by Richard Carlile. The politically directed massacre, which happened at a public protest highlighting the poor socioeconomic conditions for many at the time, and was part of the fight for universal suffrage, which led directly to the foundation of The Manchester Guardian (now The Guardian).