This post follows on from my previous article, which critically addresses David Gauke’s irrational defence of the punitive use of social security sanctions.

Some logical gaps in government rhetoric

The government claim that more people are in employment. However, the government have ensured via systematic deregulation that the ‘supply-side’ labour market is designed to suit the wants of employers and not the needs of employees. Supply-side policies include the promotion of greater competition in labour markets, through the removal of ‘restrictive’ practices, such as the protection of employment.

For example, as part of supply-side reforms in the 1980s, trade union powers were greatly reduced by a series of measures including limiting worker’s ability to call a strike, and by enforcing secret ballots of union members prior to strike action.

More recently, the Conservatives have attacked trade unions again, encroaching on work place democracy and civil rights. People claiming social security are being coerced by the state to take any job available, regardless of conditions and pay, or face sanctions.

This also seriously undermines any kind of bargaining for better pay and working conditions. It leaves workers without protection against profit-driven monopsonist employers (large employers that tend to dominate the employment market, such as Capita, G4S, Atos, Amazon, Uber, for example) leading to lower and lower wages. The government’s claims about the merits of increased labour market ‘flexibility’ have nonetheless introduced a considerable degree of precarity, which makes workers feel insecure, and more fearful of losing their jobs. It has also led to lower wage growth and rapidly increasing inequality.

As a consequence of government decision-making, much employment is insecure and wages have been driven down to the point where they are exploitative and no longer cover even the basic livings costs of workers. Wages have stagnated, and are most likely to remain stagnated for the foreseeable future.

So we now have a politically constructed economic situation where even nurses and teachers are forced to visit food banks because they can’t afford to eat.

At a time when the government boasts more people than ever are in employment, the numbers of cases of malnutrition and poverty-related illnesses are actually rising.

The official UK unemployment rate has been well below the EU average for some years, and the as the government keeps pointing out, the employment rate is almost at a historic high, yet the welfare state is seen as a major concern, with the government claiming it presents people with ‘perverse incentives’, which prevent them from working. That very clearly isn’t true. However, the employment figures disguise the serious problem of under-employment, employment precarity and low wages.

Furthermore, a recent report from the Joseph Rowntree Foundation reveals that more than a  fifth of the UK population is now living in poverty amid the worst decline for children and pensioners in decades. Nearly 400,000 more children and 300,000 more pensioners are now living in poverty than five years ago, during which time there have been continued increases in poverty across both age groups – prompting experts to warn that hard-fought progress towards tackling destitution is ‘in peril’.

The analysis highlights that 3 factors which had, over previous decades, led to a fall in poverty, are now cause for concern; social security support for many of those on low incomes ensured that people didn’t experience severe hardship and poverty, but it has been falling in real terms, changes to welfare policy have seen the numbers in poverty rising again, affordable social housing is no longer accessible and rents are increasing (particularly in the private sector), and lastly, rising employment is no longer reducing poverty.

Work very clearly does not pay.

The UK is regressing. We have a government that is undoing the social gains made following our progressive post-war settlement.

The economic problems, inequality and poverty that we are witnessing have not arisen because welfare creates ‘disincentives’ to work, nor is there a shortage of  ‘hard workers’ or a sudden growth in the number of ‘shirkers’, or people with faulty characters, as every Conservative government since Margeret Thatcher has claimed.

There is a shortage of good, secure and adequately salaried jobs. The small rise in the national minimum wage will unfortunately be offset with increasing living costs and the welfare cuts to both in and out of work social security. It’s not, by the way, a ‘national living wage’, as the Tories keep trying to claim. It’s a very modest rise in the minimum wage, which is rather long overdue. 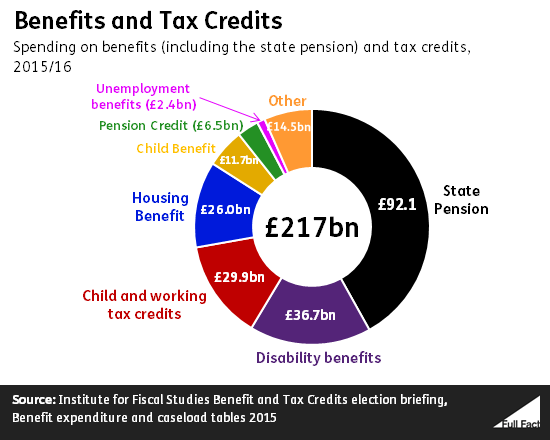 ‘Making work pay’ is a simply a Conservative euphemism for the dismantling of the welfare state – a civilised and civilising institution that came into existence to ensure that no-one faces starvation, destitution and the ravages of absolute poverty.

Most of our welfare spending goes on pensions, first, then the bulk of the rest goes on supporting people in work who are paid exploitatively low wages.

Trade unions are disempowered, because the government hates any form of collective bargaining which is aimed at improving the living and working conditions of ordinary people. They legislated to ensure that any collective action is very difficult. The government also punishes people on low pay with sanctions. As if taking money from people already on the breadline will somehow address the profit seeking executive decisions of employers. That’s cruel beyond belief.

The Joseph Rowntree Foundation report says that the squeeze on living standards now risks storing up problems for the future, with people being caught in a  ‘standstill generation’ – one where people are unable to build the foundations for a decent, secure life.

Over the last couple of days, I have seen a few people of pension age claiming that pensions are ‘not welfare’. That pensions are a ‘right’, and that people who paid in all their lives deserve support. Of course they do.

However, so do our young people (who live in a much less kind society than the one our generation enjoyed), working people, disabled people and everyone else who faces material hardship. We ALL pay into the welfare state. It was designed to provide ‘from the cradle to the grave’ support for everyone who should need it, as set out in Sir William Beveridge’s report Social Insurance and Allied Services, published on 1 December 1942.

Beveridge’s vision was for an national insurance-based welfare state in which entitlement would be earned largely by the function the citizen undertook, either through work or by assuming caring responsibilities. When Winston Churchill finally turned his attention to domestic politics after the Second World War he conjured up the phrase by which Beveridge’s proposals would be described: he envisaged a compulsory national insurance that would afford coverage ‘from the cradle to the grave’.

The underpinning welfare principles of universalism and collectivism

The national insurance scheme is intuitively fair to most people, it is based on collective ethics, rather than being governed by private market insurance rules.

‘Welfare’ means Wellbeing/Safety/Health. Beverage was tasked with the responsibility of determining what was needed for Britain to take care of the basic needs of citizens, ensuring no-one lived in poverty, and to create a set of reforms that ensured everyone had a basic standard of living, regardless of their circumstances.

Welfare was originally designed to be universally accessible when people were in need of assistance. No-one deserves support in meeting their basic survival needs more than anyone else. Or rather, every person ought to have the same right to adequately meet the costs necessary for survival – basic costs for fundamental needs such as for food, fuel and shelter, for example.

It’s a measure of how successful the Conservatives’ intentional, purposefully divisive stigmatising campaign has been of those in receipt of social security that some social groups want to now distance themselves from the very term ‘welfare’.

Yet the welfare state was a truly great British achievement, it was a civilised and civilising reform that improved the lives of many, sparing them the abject misery of absolute poverty. The Conservatives don’t pay for welfare provision: we do. Yet to hear their anti-welfare rhetoric and to read their anti-humanist ideology, anyone would think the funding comes from their own pockets, such is their scorn and indignation that people should have, and expect the right, to an adequate standard of living and healthcare.

Yet this is what Cameron had in mind when he said he wanted to end ‘the culture of entitlement’. He was signalling that the Conservatives intend to dismantle welfare,  other public services and provisions. The government portrays our welfare state as a ‘free good’, but WE have already paid for it. As did our parents.

Instead of regarding welfare as ‘unsustainable’ and as the problematic ‘vulnerability’ of some citizens requiring support in a system that invariably creates wealth for a few, and increasing hardship for the many, perhaps it’s time to view the government’s obsession with welfare conditionality, ‘behaviour change’ and punitive sanctions – which have turned a provision aimed at meeting basic material needs into a means of disciplining poor people – and with dismantling our social security, for what this really is: state oppression.

In the 1940s, a widely shared international consensus specifically linked social welfare to democratic citizenship, upholding universal rights, greater equality and social justice. We share with Europe a common history of social rights, democratic participation and welfare capitalism. In light of the recent global transformations of the economic order, significant changes in the distribution of wealth and power have reshaped the meaning of citizenship and redefined the relationship between the state and citizens in a post-welfare-state era. The lasting and damaging effects of austerity and inequality will inevitably negatively influence democratic inclusion and participation, as well as having a profound impact on people’s material wellbeing.

David Stuckler and Sanjay Basu show in their book, The Body Economic: Why Austerity Kills (2013), that the human costs of dismantling the welfare state may be measured out in increased morbidity and mortality figures, as evidenced in the global recession. The book explores government responses to financial crises through the lens of health outcomes. The authors argue that austerity is never the right prescription as it hinders return to growth and causes immense suffering to citizens’ health and wellbeing.

The truth is that for Conservatives, their perceived problems of the welfare state is not really an issue of its ‘sustainability’ or cost, it is a purely ideological issue. The Conservatives’ most treasured class-based prejudices and beliefs in the not so free Free Market are chronically and morbidly offended by it.

I guess Beverage didn’t foresee the sixth great ‘evil’ – the overarching anti-collectivism of belligerently imposed neoliberal socioeconomics, which extends ever-widening inequality and increasing poverty of the masses wherever it travels.

Welfare was designed for everyone in need, regardless of their age. That was the whole point of welfare – to ensure no-one in the UK is starving and destitute.

As citizens, we need to stand on our hind legs and bypass the intentionally divisive rhetoric. We need to stand together to defend what is OURS: the welfare state was never funded by the government and never was.

The wefare budget is therefore not the government’s money to cut.