Russia, France, and the UK have all expressed “serious consternation” over the legality of the US Embassy moving to Jerusalem, and Israel’s heavy-handed response to the ‘clashes’ it has provoked, which have reportedly caused at least 58 deaths, including six children under 18, killed by Israeli fire during demonstrations on the day of the US embassy’s inauguration in Jerusalem. There are at least 2,771 injured among Gaza protesters.

Russian Foreign Minister, Sergey Lavrov, said: “We have publicly criticised the move multiple times. International resolutions declare that the status of Jerusalem – one of the most important issues of the entire peace process – must be resolved in direct negotiations between Israel and Palestine.”

“France calls on all actors to show responsibility to prevent a new escalation,” Le Drian said in a statement. “France again calls on the Israeli authorities to exercise discernment and restraint in the use of force that must be strictly proportionate.”

The UK government has reaffirmed its commitment to keeping its embassy in Tel Aviv and said it was worried that the unilateral move could derail an already dormant peace process.

A spokesperson Theresa May said “We are concerned by the reports of violence and loss of life in Gaza. We urge calm and restraint to avoid actions destructive to peace efforts. The UK remains firmly committed to a two-state solution with Jerusalem as a shared capital.”

I think president Trump is at the helm of that very ship that has now sailed.

Britain has also called for a UN investigation looking at why “such a volume” of live ammunition was used by Israeli troops against Palestinian protestors in Gaza. That is a truly priceless comment, given the sheer volume of arms sales the UK government has made with Israel. The UK government approves thousands of  arms deals with states it condemns for human rights abuses. And then is “surprised” when those states use them.

Back in 2015, the UK government lifted all restrictions on arms sales to Israel following a year-long review of 12 export licences for weaponry which it admitted may have been used in the bombardment of Gaza.

Then business secretary, Sajid Javid, said his department was satisfied that the licences for material including components for military radar and tanks meet the UK’s export criteria, which ban any sale of arms where there is a “clear risk” that they may be used to commit serious breaches of human rights.”

The UK gave the go-ahead for dozens of military exports to Israel, including components for drones and air-to-surface missiles, in the immediate aftermath of Operation Protective Edge, which claimed more than 2,000 lives, including those of hundreds of Palestinian civilians.

Campaigners said the exports showed that the government was conducting “business as usual” in its arms sales to Israel and turning a “blind eye” to the risk that UK-made weaponry could be used in any fresh clashes between the Israelis and the Palestinians.

Britain’s refusal to suspend the 12 licences led to the resignation of Foreign Office minister Baroness Warsi, who said Britain’s stance was “morally indefensible”.

Labour party leader Jeremy Corbyn has today said that Israel’s killing of 58 Palestinian protesters and wounding of thousands more is an “outrage” and a “wanton disregard for international law”.

He said: “Firing live ammunition into crowds of unarmed civilians is illegal and inhumane and cannot be tolerated.”

The Labour party leader also made comments on the humanitarian situation in Gaza, saying “the majority of the people of the Gaza Strip are stateless refugees, subject to a decade long blockade and the denial of basic human and political rights.

“More than two thirds are reliant on humanitarian assistance, with limited access to the most basic amenities, such as water and electricity,” he added.

Corbyn has supported for the European Union and UN Secretary-General Antonio Guterres’ call for an independent investigation into Gaza, and long encouraged a review of arms sales to Israel.

He has previously said: “The UK government must support the UN Secretary-General’s call for an independent international inquiry into the killing of protesters in Gaza and review the sale of arms that could be used in violation of international law. The silence from international powers with the responsibility of bringing a just settlement of the Israel-Palestine conflict must end.”

His statement concluded that a return to negotiating a two-state solution is the only way to end the conflict.

Corbyn said the UK’s response was “wholly inadequate,” adding: “We cannot turn a blind eye to such wanton disregard for international law. That is why Labour is committed to reviewing UK arms sales to Israel while these violations continue.”

I’m currently researching and writing an in depth article on the UK’s arms trade and the implications of selling weapons and components to states with records of human rights abuse. I’m exploring the symbiotic relationship between neoliberalism and militarism. Scientific and technological research has made possible the manufacture of ever-more complex and powerful modern weaponry with such massive destructive potential and has further increased the risk of large-scale warfare and escalation into nuclear conflict. Yet the UK continues to sell weapons of mass destruction and arms components, which then inflame conflicts and further fuel proxy wars, that are already destabilising our fragile world security.

Information warfare has also gained a growing significance, exemplified by increasing US National Security Agency (NSA) and UK Government Communications Headquarters (GCHQ) global data capture, and has led reference to be made to the evolution of a “military-information complex”.

There is a detailed list and quarterly breakdown, from Wolverhampton TUC, of UK’s arms and weapon component exports to Israel, going back years, here.

From the 2017 Department of Trade’s Strategic Arms Export Controls document, there are listed details of the exports the UK government made to Israel (page 420):

There have been more UK parliamentary visits to Israel-Palestine than anywhere in last two years. In total, the visits made either side of the 2017 election were worth more than £2 million, £1.2 million of which came from the Conservative side of the House. Other declarations show that Saudi Arabia, Taiwan and Hong Kong contributed to nearly half of the £1,105,490 worth of travel covered by foreign governments, offering free flights, hotels and meals to their guests.

Labour’s John Mann made trips to Israel, most were related to his role as the UK chair of the Inter-Parliamentary Committee Against Antisemitism. Nevertheless, eyebrows were raised at the discrepancy in declarations between a trip made by Mr Mann to Israel and the Palestinian Territories, said to have cost £818, and a trip to the same area, made by Hendon Conservative Matthew Offord, which he declared as costing $3,450. Offord’s visit — in April 2018 — is understood to have taken place under the auspices of the Conservative Friends of Israel.

Mann, who registered eight overseas visits on the Register of Interests in the year following the election, the most recorded by any MP, said these trips are “part of the job”.

Britain is now the second biggest arms dealer in the world, official government figures show – with most of the weapons fuelling deadly conflicts in the Middle East.

Since 2010 Britain has also sold arms to 39 of the 51 countries ranked “not free” on the Freedom House “Freedom in the world” report, and 22 of the 30 countries on the UK Government’s own human rights watch list.

A full two-thirds of UK weapons over this period were sold to Middle Eastern countries, where instability has fed into increased risk of terror threats to Britain and across the West. 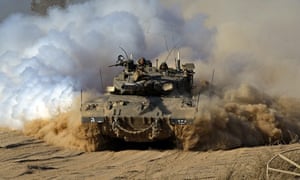 Among the export licences granted to 130 British arms-makers, one is for a company selling components for Israel’s main battle tank. Photograph: Atef Safadi/EPA

Through the arms trade, the UK is complicit in the violations of Palestinians’ human rights. Despite the illegal occupation of Palestinian land, the UK remains a major arms exporter to Israel, and purchaser of Israeli weapons and technologies. More than 100 companies manufacturing and selling military equipment to Israel have offices and manufacturing plants in the UK. Many financial institutions are invested in the weapons trade and profit from it. By holding shares in companies that export military technology and weapons to Israel, and by providing and facilitating loans to companies producing such military technology and weapons, these companies are complicit in the murder of Palestinians.

BAE systems, Rolls Royce, Boeing and Babcock are all involved in providing arms and components to Israel. Banks like HSBC are involved in financing loans for some companies, and have ties with the arms industry.

The prime minister’s husband, Philip May, works for a private investors company that is the largest shareholder in arms manufacturer, BAE Systems, whose share price has soared since the recent airstrikes in Syria. The company, Capital Group, is also the second-largest shareholder in Lockheed Martin – a US military arms company that supplies weapons systems, aircraft and logistical support. Its shares have also rocketed since the missile strikes earlier this year.

When asked at the time of the scandal about her husband’s role, a spokesperson for the prime minister told reporters: “Mr May is involved in the development of Capital Group’s retirement solutions. He is not an investor but consults with other Capital associates on retirement products and solutions for clients.”

“Capital allocation strategy” is the process of allocating financial resources to different sources to ‘maximize profits’ and ‘increase efficiency’. Overall, it is management’s goal to ‘optimize’ capital allocation so that it generates as much wealth as possible for its shareholders. This is often done using a principle of ‘blind trust’. Investments are carried out through third-party companies. “Blind” investments are unseen. Politicians often place their personal assets in blind trusts to avoid public scrutiny and accusations of conflicts of interest.

Nonetheless, there clearly ARE some serious and deadly conflicts of interest. 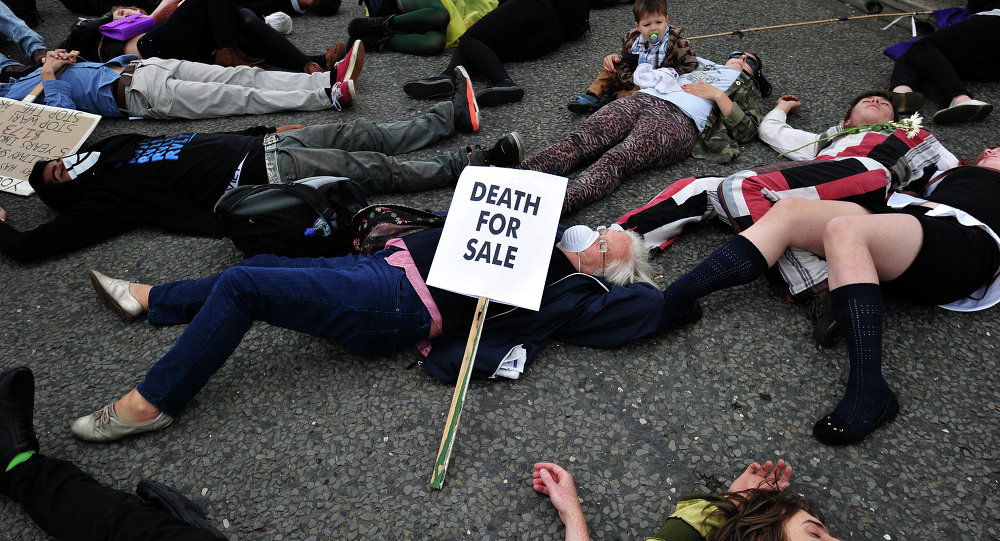