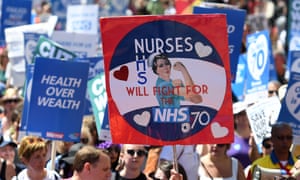 People march through London yesterday to mark 70 years of the NHS.

Gatekeeping has become a watchword within our public services over the past seven years. It’s being driven by the government’s deep affection for neoliberal dogma, the drive for never-ending ‘efficiency savings’ and the Conservatives’ lean, mean austerity machine. Perish the thought that the public may actually need to use the public services that they have funded through their contributions to the Treasury, in good faith.

In the NHS, even the resource gatekeepers have gatekeepers, those receptionists standing sentry at the end of the telephone, and in general practices, who ration access to the GPs so assiduously we patients often get better before we’ve managed to arrange an appointment. Or ended up at an Accident and Emergency Department.

Only a service dedicated to keeping the public and service providers apart could have devised a system so utterly demeaning. It turns patients into supplicants and receptionists into bouncers who make decisions they are unlikely to be qualified to make, neither being roles to which any of us aspired.

Now, it has been decided that the NHS needs to scrap more medical procedures, including injections for back pain, surgery to help snorers and knee arthroscopies for arthritis, which form part of an initial list of 17 operations that will be discontinued completely or highly restricted by NHS England as many of these problems “get better without treatment.”

I can assure you that arthritis of the knee, or anywhere else for that matter, doesn’t tend to get better. Medical interventions can help patients with ‘managing’ the condition, however.

Varicose vein surgery and tonsil removal also feature on the list of routine operations to be axed as part of NHS England’s drive to cease “outdated” and “ineffective” treatments.

The latest round of rationing is hoped to save £200m a year by reducing “risky” or “unnecessary” procedures. Patients are to be told they have a responsibility to the NHS not to request “useless treatment.”

However, complications from varicose veins, for example, include leg ulcers which require more costly specialist treatment to help them heal.

Steve Powis, the medical director of NHS England, said: “I’m confident there is more to be done”, adding that the list of 17 operations formed “the first stage” of rooting out futile treatments that are believed to cost taxpayers £2bn a year.

“We are also going to ask ‘Are there other procedures and treatments we should add to the list?’. Additions could include general anaesthetics for hip and shoulder dislocations and brain scans for patients with migraines.

Hip and shoulder dislocations are notoriously excruciating, as is the process of having the joint relocated, though the latter is short-lived. It’s particularly brutal to leave patients without pain relief, and especially children.

The reason why brain scans are often very important when people develop migraine symptoms is that they can determine whether the severe headaches are caused by something more serious, such as a subarachnoid haemorrhage (which happened to me) or a tumour (which happened to my mother). Sometimes ‘migraines’ are something else.

Powis added: “We have to spend taxpayers’ money wisely. Therefore, if we are spending money on procedures that are not effective, that is money we could spend on new treatments that are clinically effective and would provide benefits to patients. It’s absolutely correct that, in getting more efficient, one component of that is to make sure we are not undertaking unnecessary procedures.”

The rationing comes as the government prepares to raise taxes and ditch an increase to the personal income tax allowance to pay for NHS funding plans. According to proposals, £20.5bn of extra funding would be set aside for the health service by 2023. In a speech at the Royal Free hospital in London a fortnight ago, Theresa May said tax rises were inevitable.

However, there doesn’t seem to be any indication that this additional measure will ensure the public has value and adequate health care for their money.

The prime minister said: “As a country, taxpayers will need to contribute a bit more.But we will do that in a fair and balanced way. And we want to listen to people about how we do that, and the chancellor will bring forward the full set of proposals before the spending review.”

Here are the 17 treatments NHS England may axe

Four procedures will only be offered at the request of a patient:

A further 13 treatments will only be offered when certain conditions are met:

Some of these procedures do improve the quality of people’s lives. I’m wondering how this sits with the government’s drive to push people with disabilities and medical conditions into work.

Although it was announced recently that the NHS is to hire 300 employment coaches to find patients jobs to “keep them out of hospital.” It’s what the government probably calls the ‘two birds and one bullet’ approach. 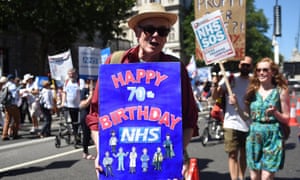 Yesterday, tens of thousands of people marched through London to mark the NHS’s 70th anniversary and demand an end to government cuts and further privatisation of the health service. Bearing placards reading “Cuts leave scars”, “For people not profit” and “Democracy or corporate power” demonstrators moved down Whitehall on Saturday afternoon to the chant of “Whose NHS? Our NHS”.

The protesters stopped outside Downing Street to demand Theresa May’s resignation en route to the stage where they were greeted by a choir singing “the NHS needs saving, don’t let them break it”. Shortly after, Jeremy Corbyn addressed the crowd – organisers said there were about 40,000 people present – demanding an end to privatisation, the closure of the internal market, for staff to no longer be subcontracted to private companies and for social care to be properly funded.

Corbyn said: “There have been huge attacks on our NHS over many years,” he said. “The Tories voted against the original legislation and have always sought to privatise it and continue an internal market.

“Paying money out to private health contractors, the profits of which could and sometimes do, end up in tax havens around the world.

“Think it through, you and I pay our taxes because we want a health service for everybody, I don’t pay my taxes for someone to rip off the public and squirrel the profits away.”

A brief history of the travailing NHS under Conservative governments

The government has failed to adequately fund the NHS since taking office as part of the coalition in 2010, and has overseen a decline in the once widely admired public health service, as a way to privatise it by stealth. 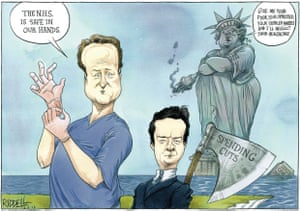 The direction of travel was set 25 years ago by the NHS review announced by Margaret Thatcher on the BBC Panorama programme in January 1988. The Conservatives have a poor track record with the NHS. Thatcher ushered in the NHS internal market, the mechanism that introduced what many in the health service still revile: competition.

Health authorities ceased to run hospitals but instead “purchased” care from hospitals who had to compete with others to provide it and became independent, self-governing trusts. The stated aim was to ‘increase efficiency’ and ‘eliminate waste’ through competition. Yet by the time John Major was prime minister, we saw the crisis deepen, with the postcode lottery and patients parked on hospital trolleys in hospital corridors for hours on end, waiting to see a worn out, overworked doctor.

In order to assess the impact of Thatcher’s legacy on healthcare, it’s essential to appreciate that NHS market reforms began on her watch. Even the apparently relatively minor step of outsourcing hospital cleaning services was to cast a dark shadow over hospital care decades later. Putting cleaning services out to competitive tender meant that the job of cleaning wards went to the lowest bidder – often to companies that used casual, untrained staff, supplied by job centres. The contrast between the high quality of surgical treatment and the dirtiness of wards became notorious. The level of hospital-acquired infections grew steadily, including those caused by  ‘superbugs’  including MRSA.

A study published by the Health Service Journal laid the blame for the rise of antibiotic resistant infections on poor hygiene standards; finding hospitals full of rubbish, uncollected left-over food in canteens and dirty linen strewn over bedroom floors. The impact outsourcing has had on cleaning services has been a constant source of tension since those early reforms. While trade unions and medical professionals have consistently argued against it, business leaders have always rejected any connection between outsourcing, infection rates, and declining standards.

Public sector outsourcing is central to the present government’s ideological strategy, despite the evidence that is now stacked against it being genuinely ‘competitive’. Since 2010, the number of large contracts awarded has increased by over 47% with tens of thousands of workers in various sectors – health, defence and IT – being transferred to corporate employers like Serco, Capita and G4S. The UK’s public sector has become the largest outsourcing market in the world, accounting for around 80% of all public sector contracting in Europe. These multinationals are not particularly interested in competition; they’re interested in profit and being in a monopoly position where they can dominate the market. Despite the wake of scandals that follows these companies, growth in the public sector outsourcing market shows no signs of slowing and the government shows no signs of learning from these events.

Thatcher wanted to introduce even more radical changes – such as a shift to an insurance based healthcare model, with ‘health stamps’ for the poor – but in a busy decade, it seems that her battles with trade unions and left-wing Labour councils took priority.

It was under Thatcher’s administration that the climate of austerity began within the NHS.

Then there was the Black Report into health inequalities, published in 1980 after a failed attempt by the  Conservatives to block its publication, noted that health inequalities in the UK were linked to socio-economic factors such as income, housing and conditions of work. The government rejected the report’s findings and recommendations.

Conservatives published a policy book called Direct Democracy in 2005. It claimed that the NHS was “no longer relevant”, and a system was proposed whereby patients were funded “either through the tax system or by way of universal insurance, to purchase health care from the provider of their choice” – with the poor having their contributions “supplemented or paid for by the state”. The authors included the current health secretary Jeremy Hunt.

Against a backdrop of austerity and public cuts, healthcare facilities are continuing to contract out their facilities management and clinical services. But, the practice remains deeply controversial and the consequences are becoming more visible.

Thatcher’s competitive tendering was introduced for cleaning, catering and other ancillary non-medical services, and were extended by the Tories in the ’90s under the NHS and Community Care Act – the first piece of legislation to introduce an internal market into the provision of healthcare. This was followed by the Private Finance Initiative (PFIs) in 1992 under the Major government.  Lansley’s reforms – premised on ‘increasing the diversity of providers in the management of the NHS’ – represent only the culmination of this legacy.

A centrally funded health service has demonstrated its a major contribution to reducing health inequality, by permitting healthcare practitioners and policy makers to design services and deliver care based on need, not the profit incentive. An increasingly privatised NHS has simply led to rationing and inadequate healthcare.

The biggest single contribution to health inequality is social inequality, a problem that has deteriorated significantly in the wake of the Conservative agenda of combined economic austerity and welfare reform. 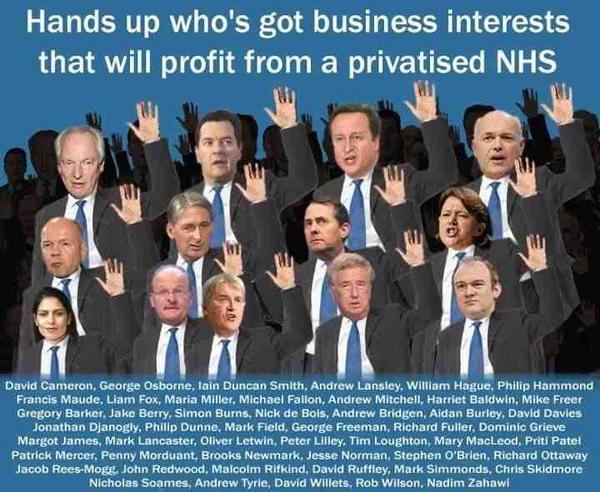