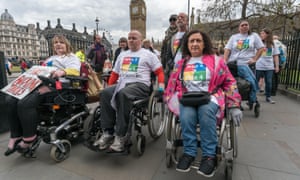 A recent research report launched last month by anti-poverty charity Zacchaeus 2000 Trust (Z2K) reveals the devastating impacts that the government’s welfare reforms are having on the lives of people who are disabled or severely unwell.

Those benefits that were supposed to provide support for disabled people – Employment and Support Allowance (ESA) and Personal Independence Payment (PIP) – are leaving hundreds of thousands of disabled and unwell people wrongly assessed and denied the vital Social Security benefit they are entitled to. Without this essential income, many people are pushed into debt, face rent arrears and eviction and have to rely on food banks to survive.

Poor design and implementation of the assessments means PIP and ESA are failing, forcing ill and disabled people to go through arduous and distressing reviews and appeals processes just to access the payments they are entitled to. The numbers of people who are wrongly assessed and let down by the system are likely to be much higher than official appeal figures suggest.

The report, Access Denied: Barriers to Justice in the Disability Benefits System, shows some of the hardship, harm and distress this causes – and the long and difficult process people have to go through to finally get the support they deserve.

“For the past two years I’ve been surviving on foodbanks, borrowing money and well-wishers helping me. Even now I’ve got over £8,000 debts to pay people.” Kalifa, ESA claimant

“I went to see my doctor and I said ‘I can’t stand this anymore.’ I would wake up in the middle of the night worrying about this.” Darren, PIP claimant

After being wrongly turned down at assessment, claimants must first go through Mandatory Reconsideration (MR), which can take anything from a few days to several months. The Department for Work and Pensions (DWP) argues that claims are fully reviewed at this stage, but the fact that 69 per cent of claimants win their appeal after having gone through MR proves that the MR itself is failing to correct the assessment’s flaws.

While those who reach the appeal do eventually receive a fair hearing, the arduous process means many never make it to this stage. Drastic cuts to legal aid mean countless ill and disabled people cannot get the legal support and representation required – and which significantly improves chances of success: 88 per cent of the clients Z2K itself supports win their appeal. The Government’s cuts to legal aid and reduced local funding for advice charities means many disabled people are losing out purely because they cannot afford private legal advice.

Raji Hunjan, CEO of Z2K, said “The whole appeal process – and the months of financial and emotional hardship people have to go through to get there – could be avoided if DWP got assessments right in the first place.

“Instead of creating such a hostile environment for those who are disabled, and assuming everyone is trying to cheat the system, ministers urgently need to recognise the reality of people’s disabilities and illnesses and give them the support they deserve.

The report recommends clear changes to the assessment, MR and appeal stages, in order to ensure that disabled and unwell people no longer have to suffer to get the payments they are entitled to.

Access Denied: Barriers to Justice in the Disability Benefits System illustrates the many barriers to justice that disabled people face, and highlights the potential solutions. It is based on in-depth research with Z2K’s clients, whose claims for ESA and PIP have been rejected – despite them having severe illnesses and disabilities.  Their stories reveal not only the serious flaws in the assessments, but also the personal impacts and enormous obstacles people face in challenging the assessment decision.

You can read the press release here.

The research findings come in the wake of the recent report from the National Audit Office (NAO), which says the Department for Work and Pensions (DWP) has underpaid benefits to the tune of £1.7bn over the last year, while official errors have also seen a significant rise in over-payments.

Underpayments now account for £1.7 billion of government welfare expenditure, while over-payments have soared to a record £3.7 billion.

The report exposes the shocking extent of departmental errors and layers of Kafkaesque bureaucracy, with the chairman of the Commons Work and Pensions Committee describing the current welfare system as “a pinball machine”.

“Lots of people are not being paid Universal Credit when they should be, causing hardship, and the same department is overpaying others – what is going on?”

But the data shows that while Universal Credit has the highest level of over-payments, at 7.2%,  has the greatest amount of underpayments at 3.7%. That figure does not include those denied PIP and who are forced to ask for Mandatory Review and then appeal.

The research also comes as Sarah Newton belligerently denied in parliament that disabled people claiming support face a politically designed hostile environment, and the Work and Pensions Secretary, Esther McVey, faces mounting calls to resign, after falsely claiming that an NAO report suggested that the roll-out of Universal Credit should be “accelerated.”

The UK government’s treatment of disabled people has been extremely controversial for many years, with the United Nations accusing ministers of “grave and systematic” violations of disabled people’s human rights following their extensive inquiry.

But despite the many concerns, challenges, presented empirical evidence and official rebukes of the government’s prejudiced and discriminatory welfare policies, the cruel treatment of sick and disabled people in the UK continues, with ministers dogmatically denying their punitive policies cause any harm and distress, indicating that the government has no intention of making positive changes any time soon.

‘Reforming’ ESA: the final frontier and the last moral boundary

Esther Mcvey forced to apologise for being conservative with the truth

I’m a disabled person and Sarah Newton is an outrageous, gaslighting liar

I don’t make any money from my work. I’m disabled through illness and on a very low income. But you can make a donation to help me continue to research and write free, informative, insightful and independent articles, and to provide support to others. I co-run a group that supports disabled and ill people going through ESA and PIP claims, assessments and appeals.

Any donation is very much appreciated – thank you.