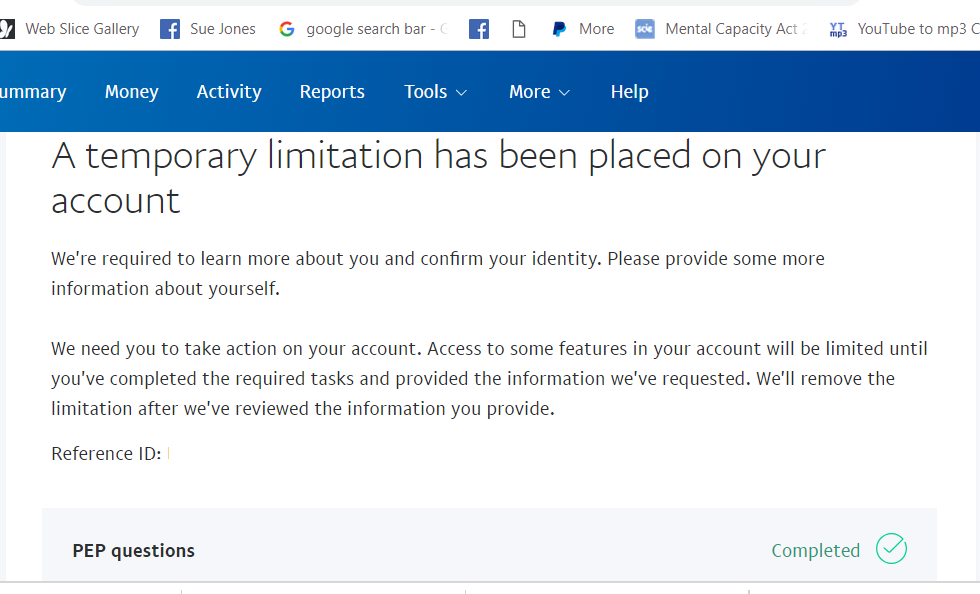 I clicked on the PEP questions and got this:

I answered no because I don’t hold a position of political office, or ‘public trust’ and I’m not ‘associated’ with or related to someone in the public trust or polical office.

I am, however, a member of a political party, like many other citizens. I have also been known to meet with MPs to raise and discuss issues with them. That does not make me a ‘politically exposed person.’

I briefly researched what a ‘politically exposed person’ is: “In financial regulation, “politically exposed person” (PEP) is a term describing someone who has been entrusted with a prominent public function. A PEP generally presents a higher risk for potential involvement in bribery and corruption by virtue of their position and the influence that they may hold.”

And: “While there is no global definition of a PEP, most countries have based their definition on the 2003 Financial Action Task Force on Money Laundering (FATF) standard, as for example the Swiss financial market regulator in 2011, which quoted it as “the international standard.”

The FATF’s latest definition of politically exposed persons (PEP), revised from 2003, is as follows

Requirements for a PEP apply to family members or close associates, any individual publicly known, or known by the financial institution to be a close personal or professional associate.

None of these criteria apply to me.

As of January 2015 the UK’s PEP definition is identical to the 2003 FATF definition, i.e. without the 2012 update to include domestic PEPs; It is found in the Money Laundering Regulations 2007 Section 14(5)[9] A politically exposed person is considered any individual who fits any of the criteria listed below:

There are a number of companies advertising for regulatory, financial and reputational risk screening.

‘Due diligence to uncover PEPs can be time consuming and requires the checking of names, dates of birth, national identification numbers and photos of clients against a reputable database of known PEPs, which usually contains over one million profiles.’

I should add at this point that I have this week had sudden inexplicable finance related problems. One is with a catalogue I have credit with (I needed a new cooker at the time, and other household items, which I have bought on credit) who have suddenly doubled the annual interest rate on my account, and justified this by claiming a ‘risk’ had come to light. They wouldn’t tell me what the ‘new risk’ was. I don’t have any other credit accounts, luckily, and have used the catalogue only when I have needed to replace essential household items for my family.

It’s probably unrelated, but I’m also suddenly battling with the council regarding an underpayment. They did reimburse me the amount last month thatthey had been deducting by mistake from my housing benefit over the last year. But now the council have this week retrospectively claimed that some of that money was Discretionary Housing Payment (DHP), and want more than half of the money they reimbursed me back.

The DHP, which I didn’t actually claim from the dates they say, was only awarded on the date I received the notification for the decision to reimbuse me the amount I was underpaid, and mysteriously backdated over a year. They are now claiming they paid that money at the time my rent was reduced for the reason the council claimed was behind the mistaken deductions. The deductions happened because the council decided without telling me that my son no longer lived at home. He was at university, but returned home out of term times. Legally that means he still lives at home. As it happens, he had eft university anyway and returned home permanently, for much of the period concerned.

The Council are now claiming – a month after this was sorted out and I was paid for the period of underpayment concerned that they had awarded DHP at the time, because they understood my son had left home. The period they claim they paid me for was last year. A notification for that didn’t arrive until I got a letter telling me the council had made a mistake and were going to reimburse me. The DHP notification letter was among the documents of how my benefit had been worked out. The letter thanked me for making a claim – that I never made for that period –  which I thought was odd at the time.

It’s bureaucratic bullshit that reminds me of the Thatcher era, when the DHSS kept ‘losing’ my ‘file’ and not paying me my unemployment benefit at a time when I was a lone parent with a baby, fleeing domestic violence, staying in a women’s aid refuge  – and a political activist. At that time, I had some major and inexplicable problems accessing any support that other people take for granted.

I do have to wonder how I could possibly even remotely be considered to be a ‘politically exposed person,’  given the definition. I have very little money. I don’t get a huge amount of donations on my site. The current balance on my Paypal site is £3.46.

This week I have had a few more donations than average because of an appeal for support to replace my laptop, which is broken, but that could not reasonably be considered a trigger for the current restriction on my account or of any suspicion of ‘corruption’.

The most I have ever had on my paypal balance is £100, minus the money that Paypal deduct. I often don’t check my balance for a week at a time or longer, because on average, I generally do not have very much on my balance.

I don’t get paid for the work I do. I would love to make a living from research and writing, but have been unable to so far. That won’t stop me from continuing doing what I do, though, providing I can stay connected to the internet, of course.

People donate sometimes. Those donations of course are entirely voluntary, and they support me in researching and writing independent articles, as well as providing help for people who desperately need support. I support people with their PIP and ESA assessments, reviews and appeals. I also support people who contact me because they are profoundly distressed by of the consequences of government austerity policies.

If simply being a person who cares very much about injustice, human rights, inequality and increasing poverty, and about how our society is organised makes me a ‘politically exposed person’, well, so be it.

I contacted Paypal today and went through some security checks with them. I asked why I had been suspected of being a ‘politically exposed person’ and they replied that the company is obliged to carry out monitoring and checks. I asked them why they had decided they needed to carry out monitoring and checks on me, specifically, and they said they ‘could not say why’.

Until the issues on my account with Paypal have been resolved, I won’t be using their donation button. But you can contact me directly if you want to make a donation.