Voting preferences according to age in the 2019 general election.

I’m writing a series of articles about the general election results in December. I’m looking for opinions on this topic.

If you’re interested in writing about the election, drop me a message here at Politics and Insights.

Thank you Double Down News for the work you do. @DoubleDownNews https://t.co/pQx0G1NNzU

George Monbiot says:  “Something has changed: not just in the UK and the US, but in many parts of the world. A new politics, funded by oligarchs, built on sophisticated cheating and provocative lies, using dark ads and conspiracy theories on social media, has perfected the art of persuading the poor to vote for the interests of the very rich. We must understand what we are facing, and the new strategies required to resist it.

“When the same thing happens in many nations, it’s time to recognise the pattern, and see that heaping blame on particular people and parties fixes nothing.

“In these nations, people you wouldn’t trust to post a letter for you have been elected to the highest office. There, as widely predicted, they behave like a gang of vandals given the keys to an art gallery, “improving” the great works in their care with spray cans, box cutters and lump hammers. In the midst of global emergencies, they rip down environmental protections and climate agreements, and trash the regulations that constrain capital and defend the poor.

“They wage war on the institutions that are supposed to restrain their powers while, in some cases, committing extravagant and deliberate outrages against the rule of law. They use impunity as a political weapon, revelling in their ability to survive daily scandals, any one of which would destroy a normal politician.”

Monbiot proposes a new model of politics which he calls political ‘rewilding.’

You can read more about Monbiot’s proposal in his article – There is an antidote to demagoguery – it’s called political rewilding.

The second view on the outcome of the election is a guest post (below) by my friend and fellow campaigner Ian Mclauchlin, reflecting his own justified suspicion of a “new politics, funded by oligarchs, built on sophisticated cheating and provocative lies, using dark ads and conspiracy theories on social media, has perfected the art of persuading the poor to vote for the interests of the very rich.”

He says: “I’ve been dismayed to see that the world seems to be going from bad to worse. Rogues are elected and there’s a suspicion (in my mind at least) that it’s happened not always by fair means. They’ve been doing the ‘wrong’ thing almost as a matter of course and getting away with it. Their values are not my values. etc.

How could this be? Why, in recent times, have we been saddled with particularly unsavoury and incompetent leaders?

If you accept for a moment that they’ve been given all the votes that they seem to have been given, why would people vote like that? For the obviously retrograde and the dangerous?

Well ask yourself what’s changed. In the last 15 years or so, but especially the last 10, Social Media have become available and increasingly heavily used. That’s given those who previously didn’t have a voice the opportunity to find their voice. Not only have they found it, but realised that it can be spread around the world. It’s then amplified by sharing and comments by like minded people. That doesn’t mean it’s the right voice, nor does it mean it’s a correct analysis. But the proponents ‘think’ that it is. So what follows?

What follows is that the bigoted, uneducated, prejudiced and intellectually challenged have found that they can spread their ‘opinions’ – often gained by  accepting with gullibility what they’re told to think by the newspapers they choose to read – far and wide. They then think that their opinions are worth more than they are. Social media amplify those opinions and recipients believe that they’re majority opinions so, like sheep, adopt them as their own!

And Political Parties of dubious morality (are there any other kind?) haven’t been slow to notice this and have deliberately muddied the social media waters accordingly for their own ends, thereby adding to the amplification and the wrong thinking. And so they’re complicit in it all and need to be held to account for that reason alone.

That’s one explanation anyway, in the face of the otherwise inexplicable and downright perverse . . . .

So what do you think happened? Ian is right about government and the media’s unrelentingly ruthless lies, dishonesty and disinformation strategies in the run up to the election and the sheer gullibility of the working class, who have apparently voted for more of the same retrogressive policies that have made their lives more difficult and precarious over the last decade.

In my next article in this series I’m exploring how social psychology may play a part in the rise in populism – a political approach that strives (on the surface, at least) to appeal to ordinary people who feel that their concerns are disregarded by established elite groups, nationalism and authoritarianism, especially in societies where people experience high levels of socioeconomic inequality.  Unfortunately, many people often mistake authoritarian leaders for ‘strong’ ones.

They’re not. Authoritarians are invariably all mouth, lots of slogans and no democracy.

The despised elite has ignored the public in the UK for the last decade has just been returned to office by the same public, as if people expect that voting for more of the same will somehow yield different results and benefit them personally, this time. Unless people really thought the elite was not this particular elite who are not a fundamental part of the establishment…

The electorate has absolutely no grounds whatsoever for the belief that things will improve, and there is plenty of evidence over the past ten years which shows how the Conservatives have not got working class interests at heart.

It seems that many people were quite happy to forego both an interest based and evidence-based decision on how to vote in 2019. 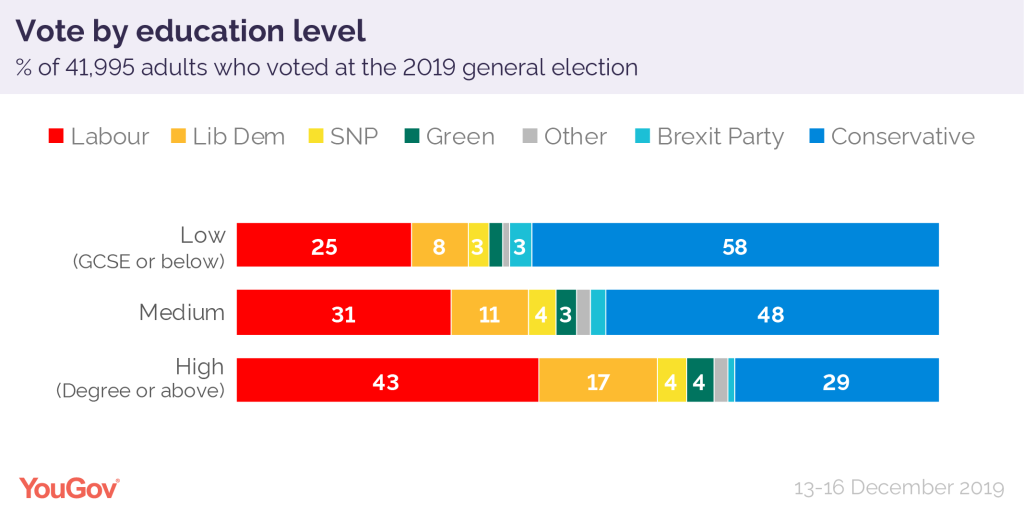 Educational attainment and voting preferences in the last general election.

Politics and Insight’s independent, measured, authoritative reporting has never been so vital, or in the public interest. These are turbulent, decade-defining times. Whatever lies ahead for us all, I will be with you – investigating, disentangling, analysing and scrutinising, as I have done for the last 9 years.

More people, like you, are reading and supporting independent, investigative and in particular, public interest journalism, than ever before.

I don’t make any money from my research and writing, and want to ensure my work remains accessible to all.

I have engaged with the most critical issues of our time – the often devastating impact of almost a decade of Conservative policies, widespread inequality to the influence of big tech on our lives. At a time when factual information is a necessity, I believe that each of us, around the world, deserves access to accurate reporting with integrity and the norms of democracy at its heart.

My editorial independence means I set my own agenda and present my own research and analyisis.  My work is absolutely free from commercial and political interference and not influenced one iota by billionaire media barons.  I have worked hard to give a voice to those less heard, I have explored where others turn away, and always rigorously challenge those in power, holding them to account.

My first step to fight back this year is to join the National Union of Journalists (NUJ) as soon as I can afford to. It is an essential protection, now.

It’s not cheap, especially for someone like me, as I’ve no income from my work. I pay WordPress to keep adverts off my site, too. But I am one of those people who often has to make daily choices about whether to eat or keep warm. I am disabled because of an illness called lupus. Like many others in similar circumstances, I am now living in fear for our future under a government that has already systematically and gravely violated the human rights of disabled people, which has resulted in fear, suffering, harm and all too often, premature death.

I hope you will consider supporting me today, or whenever you can. As independent writers, we will all need your support to keep delivering quality research and journalism that’s open and independent.

Every reader contribution, however big or small, is so valuable and helps keep me going.

18 thoughts on “After a miserable decade of austerity and inequality, how did the Tories get re-elected?”