Multimillionaire Peter Dawe (pictured above), who ran as the Brexit Party candidate in the General Election, has ‘crafted a pod’ out of two wheelie bins that he hopes will somehow alleviate the problem of rough sleeping.

Dawe fashioned what he called a ‘sleep pod’ out of two red wheelie bins, which turn on a hinge to create enough room for someone to lie down in. The entrepreneur, who picked up 1.9% of the votes when he ran in the General Election in Cambridge last year, says the ‘invention’ costs just £100. He has dozens of companies and projects listed on his website, and he believes the ‘invention’ could have a global impact. 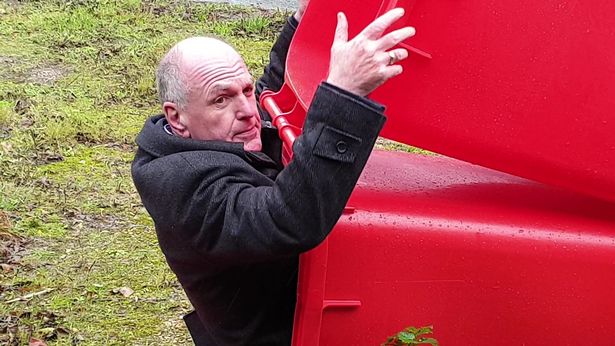 “I saw on the telly rough sleepers complaining they had been kicked and pissed upon,” he explained.

“Lying on the street in a sleeping bag, you are very vulnerable.”

He added that it was something of a ‘Marmite’ idea: “some people think it’s genius, others are actually horrified.”

“It’s denigrating to be rough sleeping – end of story.

“I think it is more comfortable and more secure sleeping in a sleep pod, rather than being huddled in a wet sleeping bag being kicked.

“I’m not solving homelessness or the rough sleeper problem, I’m just mitigating it or giving them the opportunity to.

“I try not to make any presumptions, and in my view no one should either.”

Dawe came up with the idea after building a prototype for a single person car, also from a bin.

When asked if he had slept inside the bins, Dawe said he’d spent ten minutes laid down in them. He said he “got inside a bin and discovered how comfortable it was.”

He also suggested that the ‘product’ could be used as a storage space for clothes and other items in the day time. However, when Dawe took two of his ‘prototypes’ to a local homeless shelter in Cambridge, curiously, no volunteers came forward to try it out. I really can’t imagine why…

The ‘invention’ has unsurprisingly attracted some derision and horror on social media. The Mirror’s ‘Real Britain’ columnist. Ros Wynne Jones, said: “I recently interviewed someone who had been homeless and forced to sleep in a bin during bad weather, and it was the only bit of their whole awful story where they cried, because it was so utterly humiliating to have to say it out loud.”

Matthew Taylor said “This is possibly one of the worst and most demeaning inventions I’ve ever seen.

“Bear in mind that you could buy a cheap tent for that price and it might actually work to sleep in.

“Well this is next level stuff.

“I don’t know whether to laugh in disbelief or cry.”

I think the shipping containers are a poor solution, too, but as a temporary option, a significantly better idea than the outrageous wheelie bin ‘pod’.

Last year a homeless man, Russell Lane, was forced to  sleep in a wheelie bin, and he died after he was crushed by a rubbish truck. He had graduated from college with health and social care qualification just months before he died. His legs were severely crushed after the empty bin he was sleeping in was emptied into the lorry. He died of an infection and ruptured artery in his leg.

Before that, in 2009, a homeless man was crushed to death in the bin lorry, after he had fallen asleep in a wheelie bin. Raymond Pickering was living rough in and around Nottingham and fell asleep in a large commercial wheelie bin, the city’s coroner’s court was told.

But, on the morning of May 15, the bin was emptied with him inside and he was crushed to death before his body was found hours later at Biffa’s waste-management site in Colwick.

In 2012, a homeless man was horrifically crushed to death after the wheelie bin he had fallen asleep in was emptied into a compacter lorry. He died of catastrophic head injuries. Twenty people have died in the last 10 years after being accidentally thrown into trucks, according to the Waste Industry Safety and Health organisation.

The remains of Matthew Symonds were found in a waste recycling plant in Bristol in 2014. He had taken refuge underneath some cardboard in a bin in Swindon bin after being refused entry to a homeless shelter, and was tipped into a compacter lorry as he slept.

Between 2010 and 2018 the official estimated number of people sleeping on the streets rose by 165% across the UK to around 4,677. The ‘unofficial’ figure is likely to be much higher.

Unite’s national officer Matt Draper said: “Peter Dawe’s idea is dangerous and grossly offensive. Our members who work in the refuse sector already have to check bins to prevent people being crushed to death in the back of lorries. Encouraging more people to seek shelter in bins is extremely irresponsible.

“This idea would do nothing to address the shameful rise in homelessness Britain has experienced in recent years and would only further stigmatise individuals who are in desperate need of help.”

For right wing, very wealthy entrepreneurs like Peter Dawe, the idea that homeless people should have adequately funded and effective support services and access to a social security system that ensures everyone in the UK can meet the costs of their basic survival requirements – for food fuel and shelter – rather than having a draconian system imposed on them which is creating absolute poverty and destitution seems to have never crossed their mind.

More people, like you, are reading and supporting independent, investigative and in particular, public interest journalism, than ever before.

I don’t make any money from my research and writing, and want to ensure my work remains accessible to all.

I have engaged with the most critical issues of our time – from the often devastating impact of almost a decade of Conservative policies and growing, widespread inequality to the influence of big tech on our lives. At a time when factual information is a necessity, I believe that each of us, around the world, deserves access to accurate reporting with integrity and the norms of democracy at its heart.

My work is absolutely free from commercial and political interference and not influenced one iota by billionaire media barons.  I have worked hard to give a voice to those less heard, I have explored where others turn away, and always rigorously challenge those in power, holding them to account.

I hope you will consider supporting me today, or whenever you can. As independent writers, we will all need your support to keep delivering quality research and journalism that’s open and independent.

Every reader’s contribution, however big or small, is so valuable and helps keep me going.  Thanks.