According to the Times, the calculated waste by Whitehall is more than double the £15 billion cuts planned for 2015 onwards, as recently announced by George Osborne.

Throwing money away through intentional “incompetence”. And it’s our money!

Government departments have wasted over £31 billion in the past two years according to an investigation by the Times.

Analysis of over 70 reports from the National Audit Office and parliamentary select committees shows wasteful overspending in areas such as welfare and capital projects and farm payments.

According to the Times the calculated waste is more than double the £15 billion cuts planned for 2015 onwards, recently announced by George Osborne.

Where the money went to: 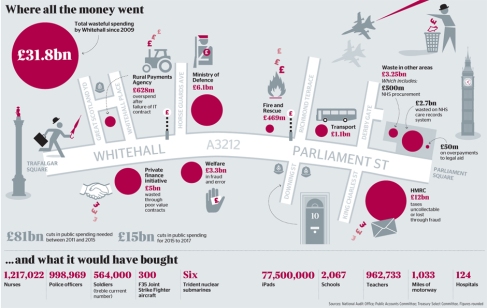 Analysis of over 70 reports from the National Audit Office and parliamentary select committees shows wasteful overspending in areas such as welfare, capital projects and farm payments.

Chairman of the Public Accounts Committee, Margaret Hodge, suggested that weaknesses in management, planning and IT skills meant government departments were unable to negotiate cost-effective contracts. Hodge went on to say that better use of government resources and clearer planning could have avoided this year’s cuts to hospitals, the Armed Forces and the civil service.

The investigation found that £10 billion was lost through uncollected income tax, while £6 billion was wasted on delayed or defective defence projects. IT systems, transport schemes and capital projects are also named as sources of overspending and waste.

The Ministry of Defence was cited as the biggest money waster. Several of its most wasteful projects were scrapped in the 2010 Strategic Defence and Security Review. However 15 of the largest spending projects are still under way, one of which involves building an airport carrier which Britain cannot afford to run and which will not be equipped with aircrafts until at least 2020.

The Private Finance Initiative, introduced by John Major, which bridges public-private partnerships, was also criticised for its escalating costs and badly negotiated contracts. The coalition government has used the initiative to launch 60 projects, with a calculated spend of £7 billion.

Francis Maude is quoted as saying, ‘We pledge to be ruthless about hunting down waste and in the first year this Government achieved savings of £3.75 billion through smarter more efficient ways of working.’

Looks like that one will be removed from the internet in due course, then.