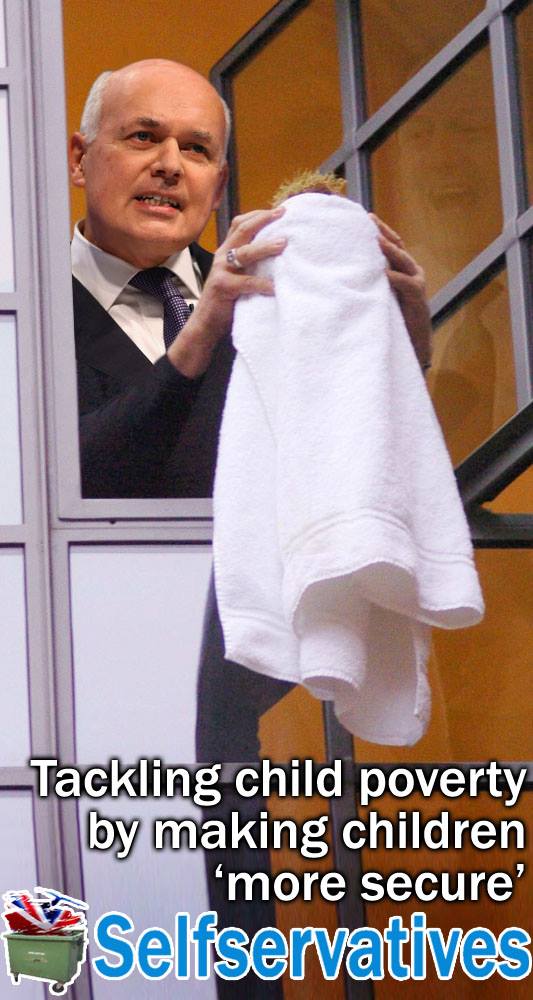 Policy documents are often a useful source for understanding how language and imagery contribute to the construction of society’s assumptions, values and beliefs. They also demonstrate the privileging and “packaging” of a particular ideology. The government’s 2010 Green paper, 21st Century Welfare, and the White Paper, Universal Credit: Welfare that Works, are both good examples of how such documents are instrumental in constructing a discourse about social security that attempts to justify a deepening of Thatcher’s brand of neoliberalisation.

The documents marginalise the structural causes of persistent and inevitable unemployment and of poverty due to government policy by attempting to linguistically transform these causes into individual pathologies of benefit “dependency” and “worklessness.”  The conservative response to conservative creations and definitions is a raft of policy measures that are about punitive conditionality and removal of lifeline benefits.

The documents indicate a clear conflation of ideas about (a) simplification of the benefits system, (b) work “incentives” and (c) conditionality and sanctions, that has led many to conclude that the welfare “reforms” amount to an attack on the unemployed, sick and disabled at a time when they are least able to do anything about it. Conservative ideology has been disgracefully portrayed as offering new and innovative “solutions” to address Britain’s supposedly broken society, and as a means of offering restoration of “traditional values” and economic competitiveness. These are, of course, Tory catechisms.

Such Conservative ideological codifications have been translated as high unemployment, an increasingly higher cost of living, increasing and deepening poverty, growing social inequalities and punitive “welfare” cuts. These social events are not a consequence of Tory economic strategy: they ARE the Conservative economic strategy. Tories always create recession – Thatcher did, Major did in the early 90s, (see also Black Wednesday), and Cameron has managed a triple-dip recession. Their economic policies don’t ameliorate the consequences of their economic policies.

It’s a curiosity. Conservatives don’t seem to realise we re-translated their catechisms a long time ago. We know this is a socio-economic and cultural war being waged on the majority of citizens. Tory ideology – it’s a doctrinal manual giving basic instruction, usually by rote or repetition. We spotted a couple of centuries back that Conservatives don’t govern and serve: they rule. They are simply aristocratic remnants of the feudal era. As Andrew Dickie said:

“These new “garagiste/card-sharping/rent-seeking” baronage know the price of everything and the value of nothing, and their only skills are those of rip-off and plunder, and are a universe away from the real economy and real wealth creation, which will be the task of the serfs – as it always was.”

But they’ve been losing this war for a couple of hundred years. More than any other group of people, Conservatives are apparently oblivious to their own ideological history, and those who don’t know their history are doomed to… inflict it. (See That Tory revolution and the rise of neofeudalism.)

Recessions are terrible for ordinary people. They create enormous misery by throwing people out of work and out of their homes. How can a political ideology remain so silent about how to address human needs and alleviate suffering? Even worse, how can a political ideology result in recession and human suffering? And then deepen it? The answer is it enormously benefits a handful of conservative wealthy people.

Recession creates an “incentive” for private companies to exploit a desperate, oppressed and (deliberately) impoverished reserve army of labour. It also “justifies” the Tory ideological drive to dismantle the socialist state provisions and services established in the 1940s. The welfare post-war settlement comprised of essential safeguards to protect the vulnerable from the worst ravages of capitalism, along with a cross-party consensus on Keynesian economics. Those safeguards were fought for – we owe SO very much –  our current freedoms – to Chartism, Trade Union pressure, and the sacrifice of thousands of ordinary people in two World Wars – without those, the old feudal set-up would never have changed. But the current conservative-led government has destroyed so much of the foundations of that freedom.

The Tories “care” for the well-being of the general public in the same way that McDonalds care for cattle.

1.75 million households in Great Britain have seen their incomes cut in the last three years as a result of benefit reforms, according to a new report by Oxfam and the New Policy Institute. We have witnessed the return of absolute poverty this past four years – the welfare state had seen an end to such severe deprivation. Until now.

The report – Multiple Cuts for the Poorest Families – delivers a warning that wide-ranging cuts are changing the shape of welfare support at a time when the rising cost of living is making it extremely difficult for families to meet their basic needs. As a result, disabled people, carers, job seekers and single parents are being pushed ever deeper into poverty.

Since last April, 400,000 households have been pushed further into poverty by cuts to housing benefit and/or council tax support – households affected by both of these cuts typically lose around £18 per week. These are costs they were previously deemed too poor to pay. Benefits were calculated originally to ensure people could meet basic living needs – food and fuel costs. This was amount was calculated on the assumption that full housing costs were also covered by benefit, and that people claiming benefit were exempt from rates/council tax. Of these affected families, 480,000 are seeing their benefits being cut twice as they are affected by more than one of the changes.

Whether a family is affected and by how much varies, based on a range
of factors which are largely out of the control of the individual. They
depend on council tax band, the cost of local housing, family size,
property size and of course, “appropriate” housing availability. But the changes apply irrespective of income.

“This is the latest evidence of a perfect storm blowing massive holes in the safety net which is supposed to stop people falling further into poverty. We are already seeing people turning to food banks and struggling with rent, council tax, childcare and travel costs to job centres.  At a time when the five richest families in the UK have the same wealth as the bottom 20 percent of the population it is unacceptable that the poorest are paying such a heavy price.”

Oxfam is calling on the Government to determine what the absolute minimum level of support should be for households in different circumstances. It must be high enough to mean that those reliant upon it are not forced to go without. People must be able to meet their survival needs. This is supposed to be a “civilised” first world liberal democracy, isn’t it?

When someone is struggling to meet their basic needs, it’s almost impossible to be motivated to do anything else, even if it’s the solution to their problem. And no amount of deplorable cruelty, such as the Tory “new conditionality” and “incentives” – the terrible and target-driven benefit sanction regime, which entails the withholding of lifeline benefits of the very poorest for up to three years, for example – will change that.

Maslow’s hierarchy of needs is a good reference point for discussion about the obstacles many people in poverty face when trying to provide for their families, in addition to themselves. But whether you recognise Maslow’s framework or not, individuals and families on low-income need to be safe, secure in a home or adequate shelter, financially stable, and possess basic emotional and physical health. 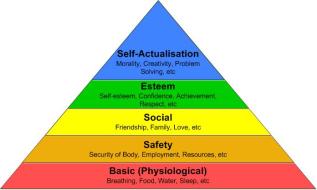 The lower the needs in the hierarchy, the more fundamental they are to survival and the more a person will tend to abandon the higher needs in order to pay attention to sufficiently meeting the lower needs.

Conservative policies seem to be designed to distract people from their “higher” needs and potential by threatening their lower, basic survival needs. This restricts growth and development in human beings, destroys human potential and so stifles social evolution. And no amount of dishonest rhetoric will ever justify this intentionally inflicted suffering on a population from a government.

Many thanks to Robert Livingstone for his brilliant pictures