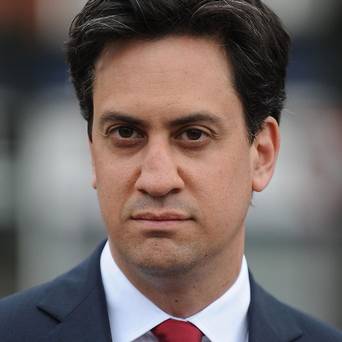 “David Cameron and George Osborne believe the only way to persuade millionaires to work harder is to give them more money.

But they also seem to believe that the only way to make ordinary people work harder is to take money away.” 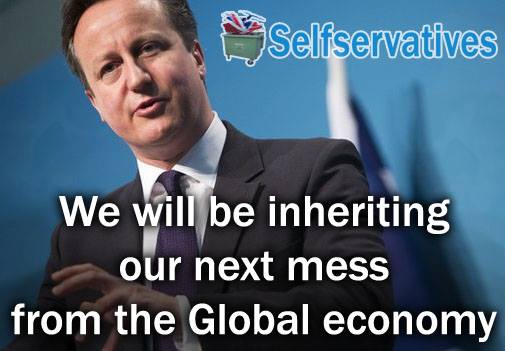 Oh, the irony of Cameron trying to blame the “global economy” for the utter mess of the UK economy that his party has created. (Well, unless you are a millionaire, then it’s all a pretty good mess, actually.) Cameron’s mess is an entirely homegrown one, and is entirely down to his policies. Worse still, no matter how desperate things get, his message to the UK is that the only solution is to stick to his plan – more austerity – the plan that has created the problems in the first place.

Labour dealt with the global banking crisis without the need for austerity, and had steered the UK out of recession by 2009/10, Cameron, and his government caused a homegrown recession just like Thatcher and Major did, through redistributing public wealth to private pockets and offshore bank accounts.

The Conservative’s “long term economic plan” is to continue transferring public funds to private bank accounts. Not for the benefit of the economy, or the public, but for the sole benefit of hoarding millionaires and Tory donors who are sucking our public funds out of circulation and killing the economy.

“Trickle-down economics” is a term imported from the US, to refer to the idea that tax breaks and other economic benefits provided to businesses and upper income levels of society will benefit poorer citizens by improving the economy as a whole. It’s linked with Laissez-faire ideology.

Laissez-faire is basically the theory of Conservative/Liberal governments that uphold the apparent autonomous character of the economic order, believing that government should not intervene in the direction of economic affairs. “Free markets” and “free competition” are seen as a reflection of the natural system of liberty.

From a Laissez-faire perspective, the State has no responsibility to engage in positive intervention to promote equality through wealth distribution or to create a welfare state to protect people from poverty, instead relying on charity to provide poor people with relief. I rather suspect this is what Cameron means by “big society”.

The claim that people who have their taxes lowered, with greater wealth, will distribute their benefit to less wealthy individuals, so that a fraction will reach the general population and stimulate the economy, is of course completely unfounded and absurd. It’s worth noting that proponents of the policy generally do not use the term “trickle-down” themselves. But the underpinning assumptions of trickle-down theory are implicit in the rhetoric of Laissez-faire/supply-side economics, and clearly expressed in social policy.

The phrase “trickle-down” has been attributed to humorist Will Rogers, who originally said of the US New Deal (the response to the Great Depression of 1930s) that “money was all appropriated for the top in hopes that it would trickle down to the needy.”

It’s original use was entirely pejorative and it was drawn on as a lampoonery device .

The Depression of the 1930s profoundly influenced our theories of economics and resulted in many changes in how governments dealt with economic downturns, and the subsequent widespread poverty, such as the use of stimulus packages, Keynesian economics, and Social Security, manifested in our post-war settlement.

Cameron is dismantling those civilised foundations we built, using the malfeasance of his own administration – austerity – and of the finance sectors that caused the global crash, as an excuse to drive their prize ultra-conservative Ayn Rand ideology into manifest existence – the withdrawal of State support for anyone who may need it. For those that don’t, the State is there as your best buddy, and will continue to intervene on your behalf to feed you great gifts.

For a party claiming to reduce the State and reduce interventions, they sure intervene a lot. Talk about an Adam Smith sleight of hand…with one “invisible hand” they take money from the poor, by introducing policies that purposefully cut income and public services, and with the other, they hand out our money to the millionaires.(See: Follow the Money: Tory Ideology is all about handouts to the wealthy that are funded by the poor.)

The trickle-down theory is not a genuine feature of the economy, but an illusion maintained by Conservatives to fool the poor into believing that there is opportunity for social mobility, and to excuse their miserly, cruel cuts to the poor, and generosity to those that don’t actually need it. It’s political hocus-pocus.

What we need, as history has taught us, is broad fiscal policies that are directed across the entire economy, and not toward just one specific income  group: that merely condenses wealth into the private bank accounts of a few, reducing the entire economy and society to a few stagnant pools of hoarding greed. It also reflects the implicit Conservative advocacy of Social Darwinist philosophy, with the “market place” absurdly operating as “natural law”, generating a socioeconomic hierarchy.

A 2012 study by the Tax Justice Network indicates that wealth of the super-rich does not trickle down to improve the economy, but tends to be amassed and sheltered in tax havens with a negative effect on the tax bases of the home economy. (See: Wealth doesn’t trickle down – it just floods offshore, research reveals.)

The trickle down theory and Laissez-faire philosophy formed the basis of economic policy during the industrial revolution of the 1800s.  It didn’t work then either, in the wake of widespread absolute poverty resulting from deeply exploitatively low wages combined with very dangerous work environments, it became evident that exclusively Laissez-faire economic attitudes resulted in the political engineering and endorsement of exploitation and harsh mistreatment of citizens. It shortened people’s lives and reduced most citizens to a harsh, miserable existence. It was a time when economic theory was mistranslated into a social doctrine of”survival of the fittest.”

As Hilary Mantel observed this week, the Tory-led Coalition are more brutal towards the poor and vulnerable than Thomas Cromwell was, she said that the Middle Ages appeared a positively enlightened era compared to the “retreat into insularity” which the UK had currently embraced. Mantel summed up criticism of this Government’s regressive justification narratives very well:

“The government portrays poor and unfortunate people as being morally defective. This is a return to the thinking of the Victorians. Even in the 16th century, Thomas Cromwell was trying to tell people that a thriving economy has casualties and that something must be done by the state for people out of work.

“Even back then, you saw the tide turning against this idea that poverty was a moral weakness.”

Of course we know that poverty is caused entirely by Government policies. And if you didn’t know that, then ask yourself how the following policies could possibly cause anything but inequality and increasing poverty for the poorest:

These cuts, aimed at the poorest, came into force in April 2013:

At the same time, note the Tory “incentives” for the wealthy:

That most definitely does not indicate any “trickle-down” of wealth.

It was noted by the Keynsian economist John Kenneth Galbraith, adviser to President John F. Kennedy, that trickle down theory was originally less elegantly called the “horse and sparrow” theory in the 1800s.

The original theory was based on the idea that if you feed a horse enough oats, it will shit enough to feed a lot of sparrows.

And the Conservatives are certainly feeding us horse shit. 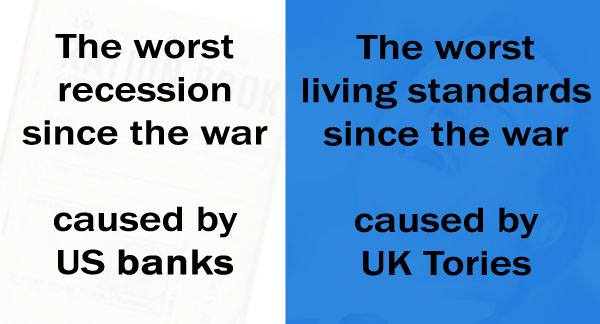 The Great Debt Lie and the Myth of the Structural Deficit

The World At One, Radio 4, 17th November, 2014: “The economic situation explained in 3 minutes.Tory austerity has given us the slowest recovery since the South Sea Bubble.Professor David Blanchflower absolutely slaughters Cameron over his pre-excuse warning over the world economy, he blames Tory austerity for tanking Britain’s economy and preventing a recovery, and states that any recovery we do have is simply part of the cycle as long as you don’t wreck it with austerity, and confirms that our economy was on the RISE in 2009 / 2010.” Robert Livingstone.

Some highlights of the Conservative long term economic plan so far: 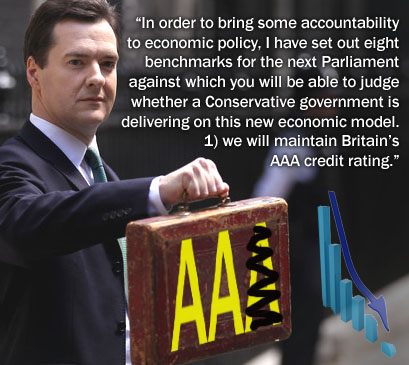 The return of absolute poverty and Victorian malnutrition-related illnesses, such as rickets and scurvy. 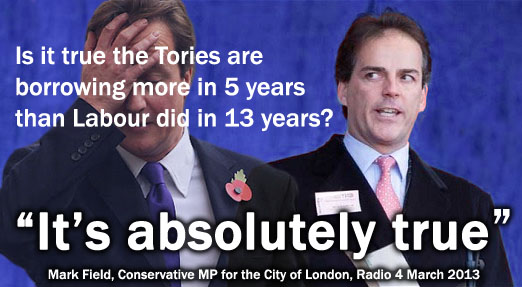 Austerity was never about “paying down the debt”, that was a Tory lie: it is entirely about “raising more money for the rich“. 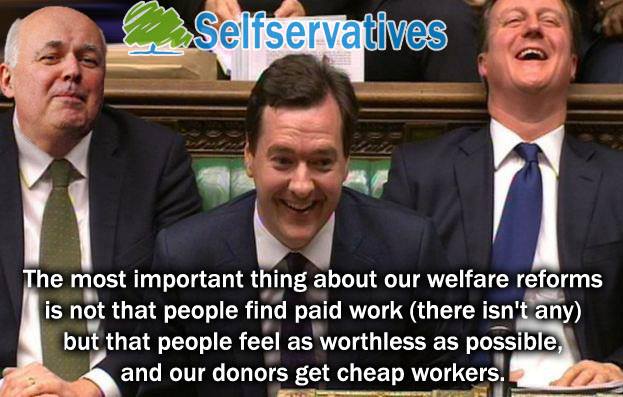 This is conservatism in a nutshell 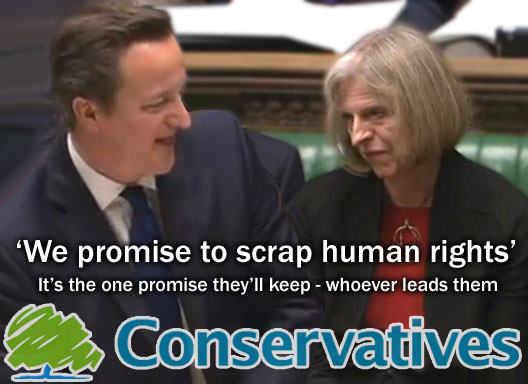 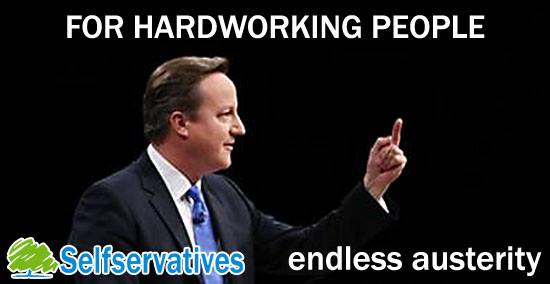 Many thanks to Robert Livingstone for his persistence in exposing the Tory lies and hypocrisy in his pictures.

8 thoughts on “Conservatism in a nutshell, part 2: Laissez-faire isn’t.”