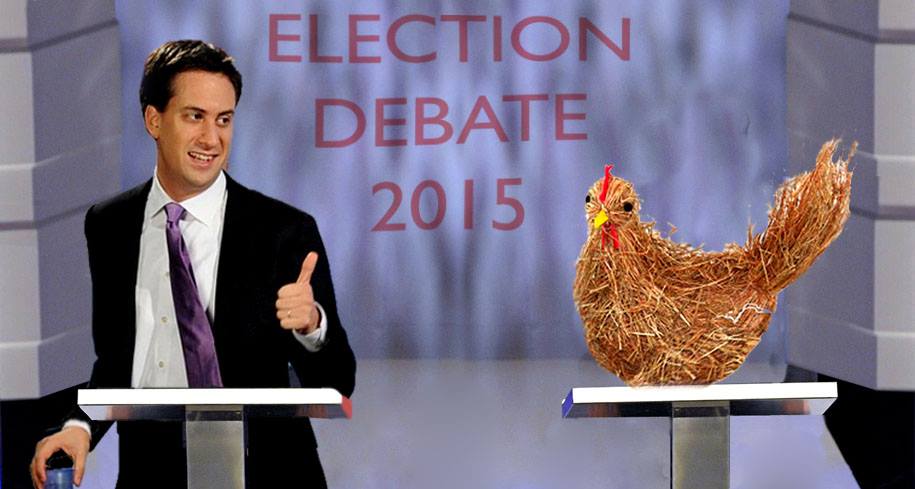 Ed Miliband is quite right to call Cameron a chicken. Tory MP Rees-Mogg appeared on Channel 4 News and laid bare the reason for Cameron’s “predicament” regarding the pre-election debates – it’s all because of a “left-wing conspiracy.” Really.

Gosh, does that mean the BBC’s political editor, Nick Robinson, once chairman of the Young Conservatives, has undergone a radical Trotskyist transformation whilst we slept?

Since when was debate, open discussion of pressing issues that affect the electorate, democratic discussion of policies, political transparency and  accountability deemed a “left-wing conspiracy”? Given the priceless claim of “BBC bias”, despite Iain Duncan Smith’s ongoing intensive monitoring campaign to keep the beeb “right”, I had to chuckle very heartily at that. It gave me quite a sarcastic turn.

I’m sure that emminent communist Lord Patten of Barnes must be delighted that standards haven’t slipped since he resigned last May as the Chairman of the BBC Trust, which is the appointed governing body.

Mind you, the government appointment of Pattern’s successor, following backroom negotiations, certainly raised a few eyebrows. Renowned socialist, Rona Fairhead (appointed a Commander of the Order of the British Empire in 2012) is one of the government’s business ambassadors and a director at the Cabinet Office, advising Francis Maude. There may be a glimpse of a political hinterland, however, from the fact that her husband, Tom, a director of the private equity firm Campbell Lutyens, was a Tory councillor.

Andrew Neil, the presenter of the BBC’s flagship political programmes Daily Politics and This Week, is chairman of the Spectator magazine. His editor is Robbie Gibb, former chief of staff to Francis Maude. And after the BBC’s economics editor Stephanie Flanders left for a £400,000-a-year job at that communist hotbed, JP Morgan, she was replaced by its business editor Robert Peston.

Peston himself has said: “Any suggestion the BBC has a left-wing bias is bollocks and the broadcaster actually veers towards a right-wing, pro-establishment view for fear of criticism.”

Research does indeed indicate that the BBC’s output is heavily biased towards the establishment and right-wing sources. Cardiff University undertook an extensive study, revealing that whilst there is always a slight bias towards political incumbents, the ratio in favour of Conservative politicians appearing on BBC news is significantly far greater than it was in favour of Labour figures when Gordon Brown was prime minister. Business representatives appear much more than they do on commercial news, and appear 19 times more frequently than trade union spokespersons on the BBC Six O’Clock News.

The evidence from the research is very clear. The BBC tends to reproduce a pro-Establishment, Conservative, Eurosceptic, pro-business version of the world. Furthermore, the Queen appoints the regulatory body – the BBC trust –  advised by government ministers, and the BBC trust then appoints the Director General. This has led to a public service run by people with strongly right-wing political and business affiliation.

Tory insiders say that Cameron is “determined” to avoid participating in the televised debates on equal terms with Miliband before the election, as he believes the Labour leader is the only one who would benefit. Chief election strategist Lynton Crosby and the former party deputy chairman Lord Ashcroft both insist Cameron should not risk taking part in a head to head, even if he endures “short-term criticism” for not doing so.

A Labour government will move to put “fair and impartial leaders’ debates” on a statutory footing in an effort to avoid them becoming subject to the kind of “political wrangling” that has characterised the programmes scheduled for next month in the run-up to polling day.

The new system would work on similar lines to the current rules for planning the number, length and timing of party political broadcasts, under which parties are consulted but not given the power to veto them.

This may be done by establishing the body which negotiates the terms of debates as a trust in statute with responsibility for determining the dates, format, volume and attendees.

A Labour government would set a deadline of 2017 for changes to be put in place, giving more than enough time to plan the debates for a 2020 election.

Meanwhile, the four broadcasters – the BBC, ITV, Sky and Channel 4 – have said they will stick to their previously-announced plans for three debates during the election campaign, and urged the Prime Minister to “reconsider” his refusal to take part in these shows, including a head-to-head showdown with Mr Miliband.

Miliband told the Observer: “In recent days the British public has been treated to the unedifying and tawdry spectacle of a prime minister seeking to duck out of the TV debates he once claimed to support with great enthusiasm. Yesterday the broadcasters made it clear they would not be cowed by his tactics but it is wrong for them and the British public to have governing parties use this kind of pressure in campaign periods. It is time to ensure, once and for all, that these debates belong to the people not the prime minister of the day.”

But Cameron hasn’t exactly led a democratically inclined, transparent and accountable government for the past five years. He knows that in agreeing to just one debate with seven parties, questions will get such a short time for responses that he can evade any meaningful, in-depth scrutiny regarding his appalling policy record, entailing the myriad U-turns, inflicted cruelties and crass, prolific dishonesties of his leadership. And the one debate that Cameron has agreed will take place before his party manifesto is published, which again dodges accountability to the electorate: a profoundly (and consistently) undemocratic approach.

As Vernon Bogdanor, professor of government at King’s College, London says: “Debates should not be subject to the tactical calculations of party leaders. There is certainly the case for a statute requiring debates between leaders of all parties with over 5% of the vote; and a separate debate between the PM and leader of the opposition. That statute is best administered by the Electoral Commission rather than the broadcasters who can too easily be accused of bias.”

Cameron clearly dare not debate head-to-head with Ed Miliband – which is remarkable, given that the Tories’ entire campaign is predicated on portraying the Labour leader as “weak and incompetent.” So why is Cameron too afraid to confront him in public?

Last year I wrote that people often mistake Miliband’s decency and refusal to engage in negative smear campaigning as “weak”: it isn’t. This year, Ed Miliband has acknowledged that perception – fueled by a desperate Tory party and right-wing media barons that have endeavoured to portray Miliband as “unelectable” – asked us not to make that mistake, in an interview with Simon Hattenstone  – Ed Miliband: don’t mistake my decency for weakness.  It’s worth reading the entire interview, what shines through is Miliband’s genuine warmth, honesty, decency, strength and conviction in his principles.

Miliband is no “career politician” and Cameron knows that formal debate with him would serve to juxtapose unfavourably – exposing the vast differences between his own unprincipled archetypal anti-heroic Flashman character – a manipulative scoundrel and liar, a cunning cheat, a corrupt and coarse coward  – and a steadfast, decent, true partisan, conviction politician with principles and integrity. Miliband is precisely the prime minister that this country so desperately needs. Cameron knows it. He doesn’t want the public to know it. 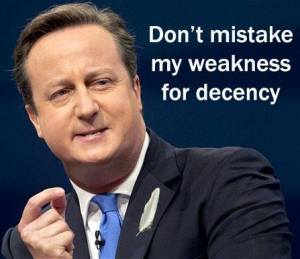 The right-wing media campaign, aimed at attempting to undermine Miliband’s credibility as a leader, arose precisely because Miliband is the biggest threat to the UK power base and status quo that we’ve seen for many decades. He’s challenging the neo-liberal consensus of the past 30 years – now that is a plain indication of strong leader, and someone with personal strength and courage. Qualities that Cameron so conspicuously lacks.

I wonder if the Tories consider their imminent loss on 7 May due to their own callous policies, prolific lying and unmitigated economic disaster these past five years a left-wing conspiracy, too?

Cameron’s chief spinner on leaders’ debates: No no no! The PM should hide and throw things at Miliband

Miliband is an excellent leader, and here’s why

The Tories attack Miliband because they’ve got no decent policies 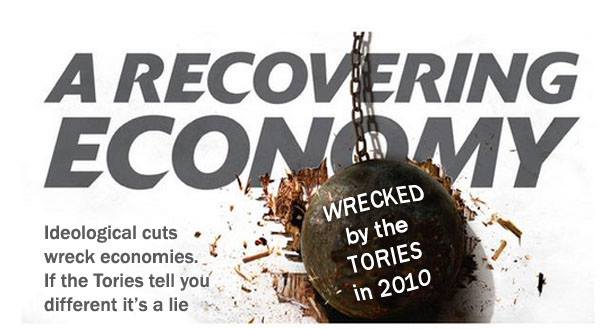 Thanks to Robert Livingstone for the excellent memes.

4 thoughts on “Ed Miliband announces that Labour will put democratic leaders’ debates on a statutory footing. And Cameron is a coward.”