If ever you needed convincing evidence that austerity – which is central to neoliberalism and social conservatism – doesn’t benefit the majority, and that the UK has a system that extends inequality and increases poverty, this is it.

Furthermore, austerity was not imposed as an economic necessary, and there were other choices available to the UK government that were less damaging to the poorest citizens and to the economy.

UNICEF have published a report about the impact of the global economic crisis and its aftermath on children. It runs fron 2007 to 2013, so worryingly, the more recent UK government welfare cuts and the consequences are not yet included in this international analysis.

In the executive summary, the report says:

“For each country, the extent and character of the crisis’s impact on children has been shaped by the depth of the recession, pre-existing economic conditions, the strength of the social safety net and, most importantly, policy responses.

Remarkably, amid this unprecedented social crisis, many countries have managed to limit – or even reduce – child poverty. It was by no means inevitable, then, that children would be the most enduring victims of the recession.”

The report goes on to say that those Governments that supported existing public institutions and programmes helped to buffer countless children from the crisis – a strategy that others may consider adopting.

The UK was quite clearly not one such country, and more recently, Iain Duncan Smith has conveniently announced changes to how we measure child poverty, shifting the economic responsibility and moral focus by blaming individuals for circumstances created by socioeconomic constraints and political decisions.

“Many countries with higher levels of child vulnerability would have been wise to strengthen their safety nets during the pre-recession period of dynamic economic growth, which was marked by rising disparity and a growing concentration of  wealth.”

In the UK, inequality has grown since the recession because of austerity measures that have been targeted at the poorest households. In fact, the UK is now the most unequal country in the EU, and has even higher levels of inequality than the US.

“The magnitude of change since the recession is worth noting. The absolute number of children living in severe material deprivation in the 30 European countries analysed was 11.1 million in 2012 – 1.6 million more than in 2008.

This trend is the result of a net effect that includes substantial decreases (more than 300,000 fewer deprived children in Germany and Poland) and unprecedented increases in four countries (Greece, Italy, Spain and the United Kingdom).”

Almost half of the severely materially deprived children (44 percent) in 2012 lived in three countries: Italy (16 percent), Romania (14 per cent) and the United Kingdom (14 per cent).

The report goes on to say:

“At the start of the recession, not surprisingly, child poverty was lower where public spending on families and children was higher. During the recession, welfare states were expected to increase their public protection spending, and many did.

In such countries, the health and well-being of citizens, especially those in financial or social need, are safeguarded by grants, unemployment assistance programmes, pensions and other benefits.

In a recession, these benefits act as counter-cyclical economic stabilizers.”

One of the most striking contrasts in the report was that whilst many other countries increased spending on welfare and essential public services to shelter the most vulnerable citizens from the impact of the global recession, in the UK, the government chose to target those social provisions for all of the austerity cuts.

“Since 2010, the United Kingdom has implemented a series of cuts that have reduced the real value and coverage of child benefits and tax credits for families withchildren. In 2013, a cap was imposed on the total benefits a household can receive, mainly affecting a small number of large families with high housing costs, while housing benefits were cut (the so-called ‘bedroom tax’), affecting large numbers of social tenants.”

It’s clear that the impacts and aftershocks of the global recession were not shared equally in our society, and the austerity measures have only made things worse for those most affected – the poorest. One emerging certainty from this report is that economic indicators alone do not reveal the complexity of social reality.

The report recommends that governments increase investment in social protection policies and programmes that can reduce poverty, enhance social resilience in children and support economic development in an efficient, cost–effective way.

Such measures include guaranteeing basic incomes for families, and a child rights impact assessment as strategy for political decision-making in the best interests of children.

Last year, I wrote that the government’s Children’s Commissioner for England published a report criticising the Coalition’s austerity policies, which have reduced the incomes of the poorest families by up to 10 percent since 2010.

The Children’s Commissioner said that the increasing inequality which has resulted from the cuts, and in particular, the welfare reforms, means that Britain is now in breach of the United Nations Convention on the Rights of the Child, which protects children from the adverse effects of government economic measures.

It therefore comes as no surprise that the current government is planning to repeal our Human Rights Act and replace it with an alternative Bill of Rights. That will mean that  human rights will no longer be absolute – they will be subject to stipulations and caveats. The government will establish a threshold below which Convention rights will not be engaged, allowing UK courts to strike out what are deemed “trivial cases”.

During their last term, the Conservatives contravened the Human Rights of disabled people, women and children. It’s clear that we have a government that regards the rights and wellbeing of most of the population as an inconvenience to be brushed aside.

You can read the UNICEF report in full here.

And also:  A summary of the rights under the Convention on the Rights of the Child.

(Best interests of the child): The best interests of children must be the primary concern in making decisions that may affect them. All adults should do what is best for children. When adults make decisions, they should think about how their decisions will affect children. This particularly applies to budget, policy and law makers.

(Social security): Children – either through their guardians or directly – have the right to help from the government if they are poor or in need.

(Adequate standard of living): Children have the right to a standard of living that is good enough to meet their physical and mental needs. Governments should help families and guardians who can not afford to provide this, particularly with regard to food, clothing and housing. 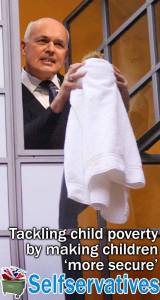