This article was written by Rachel Pugh and first published in the Guardian today. 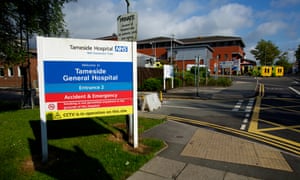 A central food collection point will sit by the canteen at Tameside hospital. Photograph: Christopher Thomond for the Guardian

Emergency staff at a hospital are being asked to offer food boxes discreetly to patients they believe may benefit as they are discharged amid rising concerns among doctors of malnourishment.

Tameside hospital in Greater Manchester is also planning to open a permanent food bank collection centre inside the hospital next month to help the nutrition of both patients and locals in the area.

News of the move came after it was announced on Wednesday by the work and pensions secretary Iain Duncan Smith that job advisers have been posted in a food bank in Manchester as part of a trial set to be rolled out across the UK.

Bosses at Tameside hospital said they had made the decision after doctors and nurses became worried about what they said was a significant rise in patients showing signs of malnourishment, and also staff living locally becoming worried about some neighbours. Staff have been given training to spot malnourishment.

Tameside hospital’s chief executive, Karen James, said: “I was talking to an old lady recovering on a ward, who was in financial difficulties and chose to feed her dog first after paying the bills, whilst she went without. It’s heartrending.”

Elsewhere, the Queen Elizabeth hospital in Birmingham opened a food and clothing bank on its main premises earlier this month, and a spokeswoman said on Wednesday that they had been inundated with donations. In the summer the Royal Victoria Infirmary in Newcastle began offering parcels to parents using its neonatal care unit. 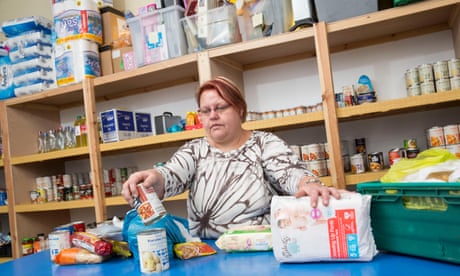 The number of people admitted to hospitals in England and Wales with malnutrition has risen dramatically, from 5,469 to 6,520 in the past year, according to the latest figures from the Health and Social Care Information Centre. The European Nutrition for Health Alliance (ENHA), meanwhile, has estimated that up to 40% of patients in the UK are malnourished on hospital admission and many go undiagnosed due to inadequate screening.

At Tameside, hospital emergency food boxes will be made up for staff in A&E to hand out discreetly, in reusable carrier bags, to those patients they feel would benefit once they are discharged and allowed home.

As well as the food parcels in A&E, a primary aim is to collect food in the hospital to distribute throughout the area and raise the level of nutrition across Tameside. Doctors say it will help stop patients who have been discharged coming straight back in again a few days later because they are unable to make a proper recovery due to lack of nutrition.

The hospital is working with the Trussell Trust – the Christian charity that has set up food banks all over the UK including in Tameside, which is an area of high deprivation. The hospital is one of the area’s biggest employers, with 2,400 staff. The number of food banks the trust is involved with has risen to more than 1,200 in recent years.

The plan is for Tameside hospital to have a central collection point adjoining its canteen, and several secure collection bins across the far reaches of the site, for staff and visitors to leave contributions. People will be asked to donate foods, which must be non-perishable and within their sell-by date.

Karen James said she believes the hospital has the right measures in place to identify malnourishment.

James said: “I and the staff believe we can do something greater than just managing the acute episode of illness. We want to start to educate patients – old and young – about how better to look after themselves. We have a duty of care to ensure we help our patients however we can.

“The food bank is an opportunity to engage with our patients. Staff believe that we have to do this as part of the community. We do not want to be just treating the symptoms, we want to be making a difference to the outcomes for our patients.”

Gwen Drain, the centre manager of the Tameside East food bank, which is part of the Trussell Trust network, said she was delighted by the hospital’s approach: “Today in Tameside there are families struggling to put food on the table. For people on low incomes, a sudden crisis – redundancy, benefit delay or even an unexpected bill – can mean going hungry. Every day parents skip meals to feed their children and people are forced to choose between paying the rent and eating.”

The Trussell Trust has a network of food banks in the area, with a distribution warehouse in the centre of Ashton-under-Lyne. The hospital’s volunteers will make regular trips on scooters to these designated sites to collect food to bring it to the central collection centre. Once a week, vans will then take the donated food to the warehouse in Ashton for volunteers to sort and pack it for distribution.

Malnutrition affects three million people in the UK and costs the NHS an estimated £5bn a year.

Malnourished surgical patients have complication and mortality rates three to four times higher than normally nourished patients, with longer hospital admissions. Similar findings have been described in medical patients, and particularly the elderly.

A spokeswoman for Birmingham’s Queen Elizabeth hospital said its scheme was part of a wider community initiative that involves using hospital land for community orchards, gardens and beekeeping. Twice a month, the hospital hosts a farmer’s market, one of the largest in Birmingham. “Food banks are about more than food,” said the hospital. “People who are referred to them are also offered practical and emotional support by signposting other agencies, whether that is financial advice or counselling services or in some cases help with clothing.”

Speaking earlier on Wednesday, Duncan Smith told the Work and Pensions Committee that people who turn to charities for help when they cannot afford to eat will be given advice on claiming benefits and finding work while they pick up emergency food parcels.

“I am trialling at the moment a job adviser situating themselves in the food bank for the time that the food bank is open, and we are already getting very strong feedback about that,” he said. “If this works and if the other food banks are willing to encompass this and we think it works, we think we would like to roll this out across the whole of the UK.”

Robert Devereux, the permanent secretary to the Department for Work and Pensions, who appeared alongside Duncan Smith at the hearing, said two advisers had been working one day a week at the Lalley Welcome Centre in Manchester.

Duncan Smith said: “They are to provide support to people who come in, and that can include people saying: ‘I haven’t had my payment’,” giving the example of a claimant whose money was delayed because officials had not seen the right documents.”