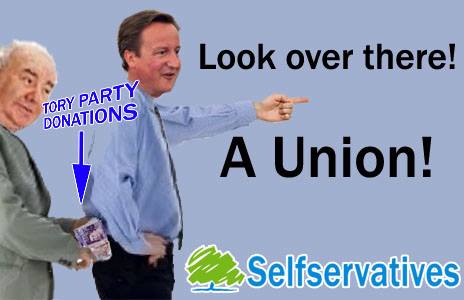 Trade Unions are fundamental to a functional democracy. Research shows that Trade Unionism is linked with higher levels of social equality and better public services, as well as better working conditions and rates of pay that ensure people have a decent standard of living. The Conservatives have always hated Trade Unions because Tory governments tend to value, perpetuate and endorse inequality and poor pay. We currently have the highest levels of social inequality in the EU, and it’s even greater than in the USA. We also have the biggest wage drop, pay hasn’t fallen this much since the 1800s. Tories like cheap labor, and profit for big business.

That isn’t in ordinary people’s best interests. The largest study of UK deprivation shows that full-time work is no longer a safeguard against poverty. Yet Conservatives claim to be the party for “hard-working people.” 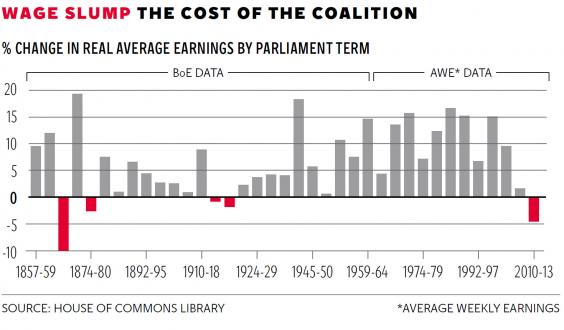 In a democratic society, governments don’t attempt to oppress opposition by using partisan policies to restrict their funding in order to turn a first world nation into a one party state. This government has established quite an impressive track record of punishing its critics to silence them. The proposed abolition of the Lords’ right to vote on or veto secondary legislation, delivered by the Strathclyde Review, but written in the rancorous and authoritarian hand of David Cameron, is another measure of draconian decision-making to stifle dissent, a tactic commonly deployed, it seems, when the Conservatives are faced with challenges and the prospect of not getting their own way, regardless of how unpopular and unreasonable their own way is.

Cameron’s rancour arose following the defeat in the House of Lords of a sneaky legslation in the form of a Statutory Instument that would have removed in work support for workers on low pay – tax credits. The defeat and ensuing publicity of the Lords debate and the exposure of an underhand legislative move forced the government to back down. But the shadow secretary for Work and Pensions, Owen Smith, has pointed out that cuts to benefit in-work entitlements being introduced through Universal Credit mean that the controversial tax credit reductions have been simply been “rebranded” by the government rather than reversed.

Secondary legislation is unamendable and is allocated 90 minutes debate in the Commons at best, by the Conservatives. Secondary legislation in the form of Statutory Instruments was only ever intended for non-controversial and small tidying up legislative measures. A Tory aide admitted that the Government are trying to get as much unpopular legislation in through the secondary route as possible. But this has been very evident anyway. The government is intent on dismantling any inconvenient piece of the constitution. 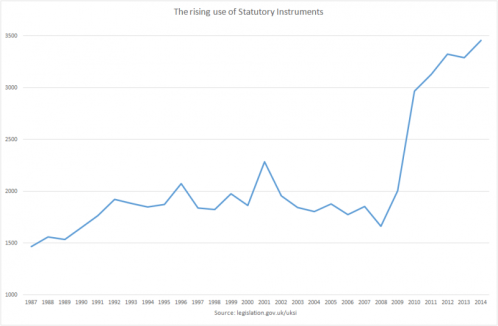 Then there are the electoral reforms and proposed constituency boundary changes which are aimed at decreasing opposition votes and increasing Conservative seats. These are all examples of a very worrying authoritarian approach that the Conservatives have adopted to stifle challenges and concerns regarding the ideological basis and the impact of their policies without any democratic dialogue whatsoever.

Trade union funding is the cleanest money in politics: it comes from you and me, and therefore will ensure our interests are reflected in policy-making, rather than just those of big business tax-avoiding Tory donors.

It’s very worrying that vulture capitalists like Adrian Beecroft, a longstanding Conservative donor, has been permitted to re-write our employment laws as part of the government’s wider “labor market “reform.” Amongst Beecroft’s known personal investments are Gnodal, a computer networking company, and Wonga.com, an eye-wateringly high interest, opportunist loan company, that commodifies the poorest people with low credit ratings for massive profits. Beecroft has donated more than £500,000 to the Conservative Party since 2006.

The Beecroft Report caused considerable controversy because it recommended that the government should cut “red tape” in order to make the hiring and firing of employees much easier. In the report, Beecroft claimed this would help to “boost the economy” although no evidence for this was provided. It was alleged that significant sections of the report had been doctored. It was also reported that some recommendations had been removed from the original draft of the report.

The (then) Secretary of State for Business, Vince Cable, condemned the report, saying it was unnecessary for the government to scare workers. Beecroft responded by accusing Cable of being “a socialist who does little to help business” and cited his own personal experience of “having to pay out” £150,000 for unfairly dismissing an HR employee as one of the reasons he included the idea in the report. In an excellent article, James Moore, writing for the Independent, said that the Beecroft report contained “the seeds of the ruthless social Darwinism” and he connected the recommendation to Beecroft’s career of cutting jobs, and highlighted Beecroft’s long history of “wholesale attacks on workers’ terms and conditions.”

In a society that puts profit before people; where employees are regarded as a disposable cost and not an asset to employers; where noone but the powerful have rights; where wages are kept to the bare minimum, there can be no economic growth. Instead we are witnessing increasing economic enclosure and widespread exclusion – small pockets of privilege characterised by stagnant, accumulated wealth and increasingly widespread poverty elsewhere. With little public spending to stimulate small business and general growth, there can be no economic security.

All Conservative politics pivot on a fundamental commitment – the defence of privilege, status, and thus sustaining social inequality. But it is only by shifting money from the high-hoarding rich to the high-spending rest of us, and not the other way around, that investment and growth may be stimulated and sustainable. 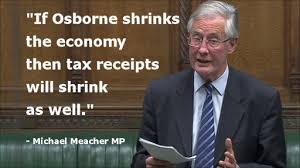 Despite their recent rhetoric, the Conservatives are not and never have been the “party for workers.” New measures under Universal Credit will make benefit payments to people who are in work, but on low earnings, conditional on them taking “certain steps” to increase their pay or hours.

Many people in work are still living in poverty and reliant on in-work benefits, which undermines the libertarian paternalist/Conservative case for increasing benefit conditionality somewhat, although those in low-paid work are still likely to be less poor than those reliant on out-of-work benefits. The Conservative “making work pay” slogan is a cryptographic reference to the punitive paternalist 1834 Poor Law principle of less eligibility.

The government’s Universal Credit legislation has enshrined the principle that working people in receipt of in-work benefits may face benefits sanctions if they are deemed not to be trying hard enough to find higher-paid work. It’s not as if the Conservatives have ever valued legitimate collective wage bargaining.

In fact their legislative track record consistently demonstrates that they hate it, prioritising the authority of the state above all else. There are profoundly conflicting differences in the interests of employers and employees. The former are generally strongly motivated to purposely keep wages as low as possible so they can generate profit and pay dividends to shareholders and the latter need their pay and working conditions to be such that they have a reasonable standard of living.

Workplace disagreements about wages and conditions are now typically resolved neither by collective bargaining nor litigation but are left to management prerogative. This is because Conservative aspirations are clear. They want cheap labor and low cost workers, unable to withdraw their labor, unprotected by either trade unions or employment rights and threatened with destitution via benefit sanction cuts if they refuse to accept low paid, low standard work. Similarly, desperation and the “deterrent” effect of the 1834 Poor Law amendment served to drive down wages.

In the Conservative’s view, Trade Unions distort the free labor market which runs counter to New Right and neoliberal dogma. Since 2010, the decline in UK wage levels has been amongst the very worst in Europe. That isn’t a coincidence. It’s an intended consequence of Conservative policy.

The Conservatives talk a lot about the need for citizen responsibility, but seem to have exempted themselves. They also seem to have forgotten that responsibities are generally balanced with citizen rights. The right to withdraw labour as a last resort in industrial disputes is fundamental to free societies, as the European Convention on Human Rights recognises.

Not that this government concerns itself with international human rights laws. We are currently the first country to face a UN inquiry into serious disability rights violations. Conservative policies are also in breach of the human rights of children and women. Conservatives operate from within a non-cooperative, competitive individualist, relatively non-altruistic framework . Their anti-humanist, social Darwinist, anti-welfare policies reflect this.

The government’s proposed changes to Trade Union laws are a major attack on civil liberties. The Conservative’s proposals have been criticised by Liberty, Amnesty International and the British Institute of Human Rights, amongst others. The three organisations issued this joint statement:

“By placing more legal hurdles in the way of unions organising strike action, the Trade Union Bill will undermine ordinary people’s ability to organise together to protect their jobs, livelihoods and the quality of their working lives.

“It is hard to see the aim of this bill as anything but seeking to undermine the rights of all working people. We owe so many of our employment protections to trade unions and we join them in opposing this bill.”

Trade unionists are at the forefront of the struggle for human rights; they are committed to social justice and international solidarity, and typically have strong community roots. These values make them prime targets of this government’s repression. 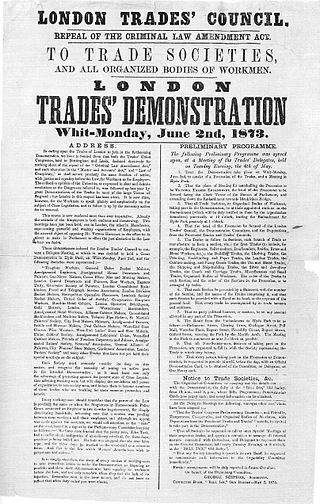 “I oppose the government’s Trade Union Bill and I will stand up for rights and freedom at work.” Sign the petition here.

9 thoughts on “Why I strongly support Trade Unionism”