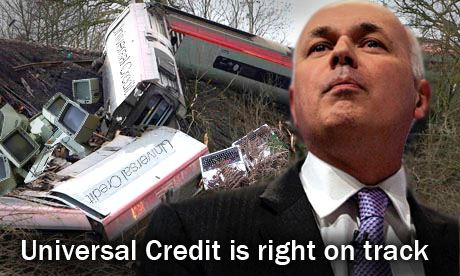 Despite Ian Duncan Smith’s persistent claims that “nobody loses a penny” under his flagship Universal Credit reform, the Department for Work and Pensions (DWP) has contradicted him and admitted that some claimants will be worse off. There seems to be a pattern emerging. Whenever the word “reform” is used by the Conservative government, it is always as a euphemism for “cuts to lifeline support.”

Guidance released this week by the DWP outlines how some working people will lose almost £900 a year. The memo supplies guidance on legislative amendments made in 2015 to the regulations which provide for the amount of earned income that is deducted from the Universal Credit maximum amount.

From 11.4.16 the range of work allowances available to Universal Credit claimants is reduced from seven to two (some rates are also reduced and some are removed completely). Consequently a work allowance will only be available where the claimant or either joint claimant is responsible for a child or qualifying young person and/or has limited capability to work (LCW).

There is no transitional protection for Universal Credit claimants whose work allowance is reduced or removed by this change.

The Shadow Work and Pensions Secretary Owen Smith said: “Iain Duncan Smith has spent months trying to pretend that ‘no one is going to lose a penny’ as a result of his Universal Credit cuts.”

“That’s now been blown out of the water by his own officials, who’ve produced a guidance note for DWP staff on how to implement the cut.

“Duncan Smith should read his own department’s guidance and call on the Chancellor to drop the Universal Credit cuts in the Budget.”

A DWP spokesman said: “Universal Credit (UC) is revolutionising welfare, with claimants moving into work faster and earning more than under the previous system.”

“As part of moving to a high-wage, low-tax society we are simplifying the work allowances under UC and giving those affected extra help to progress in work and earn more.”

“Even after the changes, UC claimants will know they are better off in work.”

The Poor Law Amendment Act of 1834 was based on the “principle of less eligibility,” which stipulated that the condition of the “able-bodied pauper” on relief be less “eligible” – that is, less desirable, less favourable – than the condition of the very poorest independent labourer. “Less-eligibility” meant not only that the pauper receive less by way of support than the labourer did from his wages but also that he receive it in such a way (in the workhouse, for example) that made pauperism less respectable than work – to stigmatise it. Thus the labourer would be discouraged from lapsing into a state of “dependency” and the pauper would be encouraged to work.

The less eligibility principle “made work pay”, in other words.

The current government is going even further, and applying the same punitive approach to people in low-paid employment, presumably to serve as a deterrent to poor wages. Personally, I think unions do that much better through collective bargaining, by addressing those actually at fault – exploitative employers, rather than poor, exploited employees.