“When I use a word,” Humpty Dumpty said in rather a scornful tone, “it means just what I choose it to mean — neither more nor less.”

“The question is,” said Alice, “whether you can make words mean so many different things.”

“The question is,” said Humpty Dumpty, “which is to be master — that’s all.”
― Lewis Carroll, Through the Looking Glass

Semantic thrifts: being Conservative with the truth

Much communication in the media is geared towards establishing a dominant paradigm and maintaining an illusion of a consensus. This excludes pluralism and ultimately serves to reduce democratic choices. Such an approach is ultimately aimed at nudging your voting decisions and maintaining a profoundly unbalanced, pathological status quo.

Presenting an alternative narrative is difficult because the Conservatives have not only framed all of the issues to be given public priority – they set and stage-manage the media agenda – they have also dominated the narrative; they constructed and manage the political lexicon and now treat words associated with the Left, such as welfare, like semantic landmines, generating explosions of right-wing scorn, derision and ridicule – words like cooperation, inclusion, mutual aid, reciprocity, equality, nationalisation, redistribution and the like are simply dismissed as mere anachronisms that need to be stricken from public conversation and exiled from our collective consciousness, whilst all the time enforcing a bland language of an anti-democratic political doxa.

However, the Conservatives have also raided from the progressive lexicon, and I’m far from alone in noticing the Conservative colonisation of traditionally progressive rhetoric in recent years, using in abundance terms such as “fair”, “support”, “protection”, “freedom” , “opportunity”, “reform” and even “social justice” to pepper their speeches.

Last October, even Dan Hodges noticed the linguistic imports. He said: “Prison reform. Ethnic minority rights. Gay rights. A national housing “crusade”. An “all out assault on poverty”. An attack on “the lowest social mobility in the developed world”. These were the main themes of the Conservative Party leader’s – I’ll repeat that, the Conservative Party leader’s – address to his annual conference. I expected David Cameron to attempt to park his tank on Labour’s lawn.

… It wasn’t just what David Cameron said, but how his party reacted to it. The section of his speech where he said “I want us, the Conservatives, to end discrimination and finish the fight for real equality in Britain today,” was met with a standing ovation.”

The Conservatives have plundered from left wing discourse purely to broaden their superficial appeal and to neutralise opposition to controversial and contentious policy. The legislative context in which such language is being used is completely at odds with how it is being described by purposefully stolen terms and phrases. It’s disorientating and cognitive dissonance inducing to see the language of social justice, democracy, inclusion and equality being used to justify and describe policies which extend social injustice, authoritarianism, exclusion and inequality.

There is a growing chasm between Conservative discourse, and policy intents and outcomes. There isn’t a bridge between rhetoric and reality. Last week I wrote about the chancellor’s budget, and said:

The Tories all too frequently employ such semantic shifts and euphemism – linguistic strategies – as an integral part of a wider range of techniques of neutralisation that are used, for example, to provide linguistic relief from conscience and to suspend moral constraint – to silence both “inner protest” and public objections – to the political violation of social and moral norms; to justify acts that cause harm to others whilst also denying there is any subsequent harm being inflicted; to deny the target’s and casualties’ accounts and experiences of political acts of harm, and to neutralise remorse felt by themselves or other witnesses.

Media discourse has often preempted the Conservative austerity cuts, resulting in the identification, stereotyping and scapegoating of the groups in advance of the targeted, discriminatory policies. Media discourse is being used as a vehicle for the government to push their ideological agenda forward without meeting legitimate criticism, public scrutiny and without due regard for essential democratic processes and safeguards.

The five neutralisation techniques identified by Gresham Sykes and David Matza are: denial of responsibility, denial of injury, denial of victims, appeal to higher loyalties, and condemnation of condemners.

The really critical part of Sykes and Matza’s argument is that rationalisations precede immoral, cruel or controversial acts and are a key factor in making deviant behaviour possible (amongst delinquents, the mafia or Conservative ministers). As such, the rationalisations betray intent.

The cuts of £120 a month to the disability benefit Employment Support Allowance  are also claimed to be “fair.” and “supportive.” Though I have yet to hear a coherent and rational  explanation of how this can possibly be the case. Ministers claimed that people subjected to the ESA Work Related Activity Group cuts could claim PIP if they required support with extra living costs, but now we are told that PIP is to be cut, too.

Osborne ludicrously claimed that the Conservative government was “increasing spending on disabled people”, he said: “Controlling welfare bills is part of what you need to do if you’re a secure country confronting the problems in the world.”

But as Andrew Marr amongst others pointed out, the cuts to ESA and PIP show an intended substantial reduction on government spending to essential support for disabled people.

The Conservatives have co-opted a progressive language to disguise extremely regressive policies, and to blur and manipulate traditional ideological boundaries. It’s purely strategy rather than ideological direction. They have quite cunningly [re-]framed a partisan narrative, dressing it up as common sense. For example, policies are framed using the phrases like “social justice”, “fighting poverty”, Conservatives present themselves as the “party for working people” and claim concern for ensuring people “fulfil their potential”. These are phrases ordinarily associated with discourses of the Left.

This framing makes it much more difficult for the Left to focus public debate on the issues central to social democracy. Equality of opportunity, linked with open social mobility, merit and freedom, is another central value and objective for progressives. However, equality appears to be increasingly couched in negative terms, as opposed to merit, and often associated with social injustice, inefficiency and unfairness by the Conservatives.

Under the Equality Act, provision was made by the Labour government to ensure that legislations didn’t discriminate against protected social groups, which included disabled people. However, the need for public bodies in England to undertake or publish an equality impact assessment of government policies, practices and decisions was quietly removed by David Cameron in April 2011. The legal requirement in the Equality Act that ensured public bodies attempt to reduce inequalities caused by socio-economic factors was also scrapped by Theresa May in November 2010, who said that she favoured a greater focus on “fairness” rather than “equality”, claiming that many people felt “alienated” by the equality agenda.

The Conservatives have paid a lot of money to advisors to develop ways of expressing their world-view and the use of misleading discourse, almost invariably contradicted by policy, practice and outcomes, is intentional.

The Tories use euphemism a lot to neutralise criticism and to present a facade of judicious, equitable rationale for draconian policies founded on ideology and traditional Tory prejudices. The redefinition of the financial crisis as a state – specifically, “irresponsible government” – rather than a market failure, and a narrative of “enhanced efficiency and responsibility in public administration” translates into policy practice as cuts to the public sector, drastic cuts to the post-war settlement social safety net budgets and a steady erosion of workers´ rights, “excellence and free choice in education or health service provision” means widespread privatisation – and a deterioration of public services, leaving  citizen’s with considerably less choice and increasingly unmet needs.

The Conservative’s progressive rhetoric conceals a partisan determination to impose neoliberal policies that shrink the size of the state, while defending traditional Conservative vested interests among the financial sector and the wealthy.

Yet Cameron and his chancellor have successfully placed the blame for the deficit on Labour’s trumped up charge of “profligacy” in government, despite the fact that we were out of recession caused by the global financial crisis, by the last quarter of 2009. Despite the fact that the Conservatives created a recession in 2011, and we lost our Fitch and Moody triple A credit ratings, despite Osborne’s promises and assurances that we wouldn’t. The Conservatives have a historically verified tendency to create recessions, too. The Thatcher administration did, and so did John Major’s. How did the public forget these events? Black Wednesday is estimated to have cost us £3.4 billion. The constant repetition of the profligacy lie, ad nauseam, supplanted the public’s accurate perception of the underlying events.

“David Cameron and George Osborne believe the only way to persuade millionaires to work harder is to give them more money.’

‘But they also seem to believe that the only way to make you (ordinary people) work harder is to take money away.” Ed Miliband, 2012.

Taxation of the wealthy is framed as an unfair burden – an affliction or punishment, propped up by constant implicit references to debunked notions such as trickle-down wealth and job creation. Policies extending social injustice are being reframed as social justice.

Framing takes a long time to develop, and this particular frame was developed by the New Right on both sides of the Atlantic. It does leave progressives with a fight to articulate the moral basis for progressive taxation, obstructed by the outrageous Conservative myth that wealthy people have somehow amassed their wealth all by themselves and therefore deserve it and more. The truth is that it is ordinary UK taxpayers who support the infrastructure of wealth accumulation. It is only fair that those who benefit most from this should also pay their equal share.

Without the veneer of democratic engagement and respectability that the Conservatives raided from discourses of the Left, Conservative policies would appear as they really are: driven by a narrow ideology, based on traditional Tory prejudices and completely indefensible. 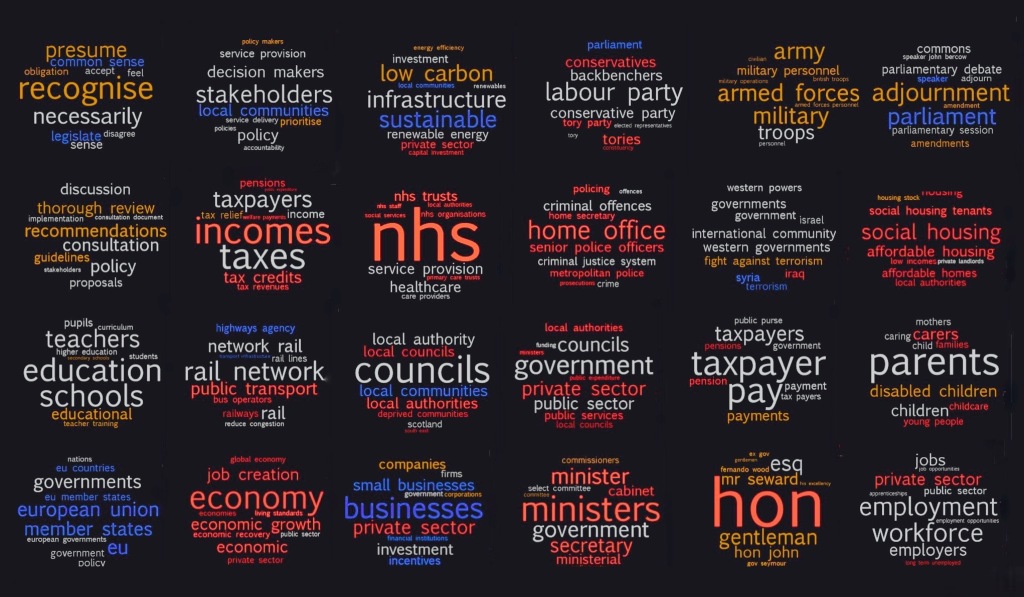 This image contains 24 word clouds, representing the 24 categories into which a sample of roughly 130,000 statements from UK House of Commons parliamentarians, all made between 2006 and the present day, were partitioned by the clustering algorithm. Each cloud contains ten words; the larger the word, the more representative it is of the cluster. The colouring is also meaningful: red words have meanings more closely aligned with remarks by Labour politicians; blue words, with those of Conservatives; and yellow words, with the sentiments of Liberal Democrats.See source: Clustering debates from UK politicians.

How to Respond to Conservatives –  George Lakoff

I don’t make any money from my work and I’m not funded. You can support Politics and Insights by making a donation to help me continue researching and writing independently, and to continue to help others.

20 thoughts on “Through the looking glass darkly: the Conservatives are colonising progressive rhetoric”