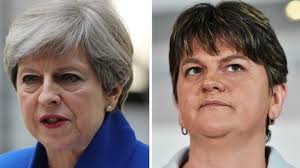 Talks between the DUP and the Government “haven’t proceeded in a way that DUP would have expected”, sources have told Sky News.

Apparently, Northern Ireland’s Democratic Unionist Party (DUP) is urging the Government to give “greater focus” to the negotiations and that the “party can’t be taken for granted”. It has been widely expected that the DUP will want more money for Northern Ireland as part of the deal.

A day before setting out her legislative measures in the Queen’s Speech, Theresa May has yet to secure a deal with the DUP to allow her Government programme to survive a Commons vote.

The talks have been ongoing since the Conservatives failed to win an outright parliamentary majority in a disastrous General Election on 8 June.

May says she is confident that the DUP will eventually back her, but a deal remains elusive.

The wider context of politics in Northern Ireland is adding to problems, and the government’s involvement in attempts to restore the power-sharing executive at Stormont is under criticism. Many of us have said that this is problematic because May cannot claim impartiality in negotiations, since she is relying on the DUP to prop up her government. There are also worrying implications for the Good Friday Agreement, and many of us have been concerned that a Conservative and DUP arrangement may be in breach of the agreement, and may compromise the important peace deal.

Almost on cue, the Guardian reports that Theresa May is facing a landmark legal challenge over her proposed deal with the Democratic Unionist party on the grounds that it breaches the Good Friday agreement.

An experienced legal team, which has been involved in constitutional challenges, is planning to apply for a judicial review of the deal once it is announced.

High court judges would be asked to examine whether the pact breaches the British government’s commitment to exercise “rigorous impartiality” in the Good Friday agreement.

The case, which could be heard in the supreme court because of its constitutional significance, follows warnings by politicians from all sides that the deal risks undermining the peace process in Northern Ireland.

The transport secretary, Chris Grayling, said on Tuesday that the deal to support the Conservative’s minority government may not be sealed until after the Queen’s speech.

It is understood that the legal challenge has been in preparation for some time but that any action would be announced after the prime minister outlines the deal in the coming days.

Lawyers are believed to have found a lead claimant to fight the case, similar to the role that the investment banker Gina Miller had when she won a supreme court ruling ordering ministers to introduce emergency legislation to authorise Britain’s departure from the EU in January.

It is understood that potential lead claimants have been warned to expect significant press attention – Miller has said the Brexit case made her the most hated woman in Britain – and that the claim will need to be crowdfunded.

Lawyers are understood to be keen for the judicial review to be heard before the end of this year at the latest.

An announcement of a deal between the Conservatives and the DUP to form a minority government was expected last Wednesday but was delayed due to the Grenfell Tower fire, in which it was announced that at least 79 people died or are presumed dead. Many expect that number to rise.

Politicians from all sides have warned the prime minister that striking a deal with Arlene Foster’s party could put the fragile peace in Northern Ireland at risk.

Sir John Major said last week that a deal risked alienating armed republicans and loyalists, and cause resentment in other parts of the UK if the government made promises to spend large amounts of public money.

The Sinn Féin president, Gerry Adams, also accused May of not honouring the Good Friday agreement after meeting the prime minister last week.

The Guardian is also aware that a Northern Ireland law firm has considered a similar challenge.

The legal challenge is likely to focus on subsection five of article 1 of the 1998 Good Friday agreement, which states that the UK and Irish governments “affirm that whatever choice is freely exercised by a majority of the people of Northern Ireland, the power of the sovereign government with jurisdiction there shall be exercised with rigorous impartiality on behalf of all the people in the diversity of their identities and traditions and shall be founded on the principles of full respect for, and equality of, civil, political, social and cultural rights, of freedom from discrimination for all citizens, and of parity of esteem and of just and equal treatment for the identity, ethos and aspirations of both communities.”

The phrase “rigorous impartiality” and what it implies is likely to be the crucial legal issue to be tested.

In a commentary last week, Colin Harvey, professor of human rights law at Queen’s University, Belfast, wrote: “‘Rigorous impartiality’… is central to the Good Friday agreement and to the British-Irish agreement (an international treaty between the UK and Ireland). The concept flows from the complex right of self-determination on which the current British-Irish constitutional compromise is based.

“Any deal between the Conservative party and the DUP that infringed the above principles or strayed directly onto Good Friday agreement territory (such as, for example, ruling out a unity referendum) runs a real risk of being in breach of article 1 of the British-Irish agreement.”

Related
The DUP: history and controversy

4 thoughts on “Theresa May faces legal challenge regarding DUP ‘arrangement’”