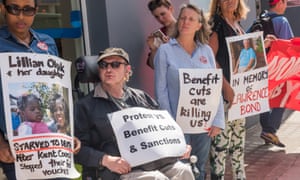 The Work and Pensions Committee has published a report this month regarding the findings of an ongoing inquiry into welfare conditionality and sanctions.

The Committee says in the report:“Of all the evidence we received, none was more compelling than that against the imposition of conditionality and sanctions on people with a disability or health condition. It does not work.

“Worse, it is harmful and counterproductive. We recommend that the Government immediately stop imposing conditionality and sanctions on anyone found to have limited capability for work, or who presents a valid doctor’s note (Fit Note) stating that they are unable to work, including those who present such a note while waiting for a Work Capability Assessment. Instead, it should work with experts to develop a programme of voluntary employment support.”

The report concludes that “The human cost of continuing to apply the existing regime of benefit sanctions – the ‘only major welfare reform this decade to have never been evaluated’ – appears simply too high. The evidence that it is achieving its aims is at best mixed, and at worst showing a policy that appears ‘arbitrarily punitive’.”

The Committee says the Coalition Government “had little or no understanding of the likely impact of a tougher sanctions regime” when it introduced it in 2012 with the stated aim, as the NAO describes it, that “benefits, employment support and conditions and sanctions together lead to employment.”

At that point, the Government promised to review the reform’s impact and whether it was achieving its aims on an ongoing basis. But six years later, Government “is none the wiser.”

As one expert witness suggested, “if it was not for the embarrassment, the Government would have suspended Employment and Support Allowance (ESA) sanctions altogether as soon as that National Audit Office finding came out that sanctioned ESA claimants were less likely to get into work.”

The report highlights that single parents, care leavers and people with a disability or health condition are disproportionately vulnerable to and affected by the withdrawal of their benefit. The Committee says that “until the government can show unequivocally that sanctions actually help to move these claimants into work, it cannot ‘justify these groups’ continued inclusion in the sanctions regime’.

In the meantime, and until that positive link is proven, people who are the responsible carer for a child under the age of 5, or a child with demonstrable additional needs and care costs, and care leavers under the age of 25, should only ever have a maximum of 20% of their benefit withheld.”

The report authors go on to say: “The Department for Work and Pensions (DWP) must urgently evaluate the effectiveness of the reforms to welfare conditionality and sanctions since 2012, including their impact on people’s financial and personal well-being.

“Until the Government can point to ‘robust evidence that longer sanctions are more effective’, higher level sanctions should be reduced to 2, 4 and 6 months for first, second and subsequent failures to comply”.

The report goes on to say: “Government should also “immediately stop imposing conditionality and sanctions on anyone found to have limited capability for work, or who presents a valid doctor’s note” stating they cannot work. Instead, it should work with experts to develop a programme of voluntary employment support for those who can get into work.”

Sanctions have no effect on in-work claimants

Randomised Controlled Trials have shown sanctions had no effect on in-work claimants’ outcomes, and work coaches are not yet equipped to get enough decisions right. Sanctioning people who are working is too great a risk for too little return. DWP should not proceed with conditionality and sanctions for in-work claimants until full roll-out of Universal Credit is complete, and even then, only introduce sanctions on the basis of robust evidence that it will be effective at driving progress in work.

“We have heard stories of terrible and unnecessary hardship from people who’ve been sanctioned. They were left bewildered and driven to despair at becoming, often with their children, the victims of a sanctions regime that is at times so counter-productive it just seems pointlessly cruel.

While none of them told us that there should be no benefit sanctions at all, it can only be right for the Government to take a long hard look at what is going on. If their stories were rare it would be unacceptable, but the Government has no idea how many more people out there are suffering in similar circumstances. In fact, it has kept itself in the dark about any of the impacts of the major reforms to sanctions introduced since 2012.

The time is long overdue for the Government to assess the evidence and then have the courage of its reform convictions to say, where it is right to do so, ’this policy is not achieving its aims, it is not working, and the cost is too high: We will change it.”

The Work and Pensions Committee are currently looking into the Government’s plans for moving people who are already claiming benefits onto Universal Credit, which merges six “legacy” benefits into one, single, monthly household payment. The Government calls this “managed migration”. The Committee is also looking at the impact of the changes announced by the Government in the 2018 Budget.

Work as a health outcome, making work pay and other Conservative myths and magical thinking