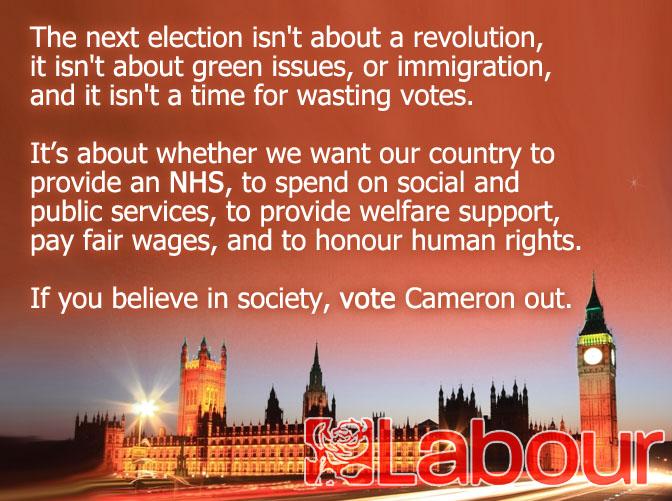 Over the past few years, many of us have spent a lot of time and effort repeating ourselves to dispel Tory lies. However, we have also had to contend with negative campaigning and tiresome lies from UKIP, the Greens, the SNP, the NHA, Left Unity and a variety of other parties, posting on social media sites, in the mainstream media and smearing the Labour Party. The repetition becomes very tedious very quickly.

Each of the offending parties prefer to attack the Labour Party and lie about their policies, rather than promoting their own party by merit – by using positive statements about their own policies and achievements. This strategy cannot possibly help them gain any lasting credibility and support, since credibility cannot be sustained when it’s being built upon a foundation of lies and political grandstanding.

Ultimately, the only beneficiaries of this behaviour will be the Conservatives, left largely unchallenged by the fringe “narxist” parties on the so-called Left. The only party actually meaningfully opposing the Tories is Labour.

Whilst the Left vote is being intentionally diluted by a proliferation of lies and smear campaigns to confuse, demoralise and bolster fringe party support, you can pretty much bank on the fact that Tory supporters will ALWAYS vote for the Tories. No amount of claiming “I’m more socialist than you” will stand up to scrutiny or save this country and those people already suffering terribly if the Tories manage to succeed in May.

I decided to consolidate the frequently encountered lies and construct a crib sheet of facts and evidence for anyone to use in response to lies, propaganda, nonsense and misinformation. Or to simply enlighten.

Here are some of the most frequently used “criticisms” of Labour:

A compare and contast of New Labour and Conservative policies and achievements. This demonstrates very well that there are very clear differences, despite the fact that many considered Blair to be further right than Miliband or his predecessors – Political parties – there are very BIG differences in their policies.

I’ve also addressed this issue at length here – The ultimate aim of the “allthesame” lie is division and disempowerment of the Left.

1. In 2003, Conservatives voted with the Government to send British troops into military action,  the Conservative votes carried  the motion authorising the conflict, since 139 Labour MPs rebelled against their party’s whip. Iain Duncan Smith led Conservative MPs in demanding a rush to war as early as 2002. 139 Labour MPs rebelled against the governments’ line and saying there was no moral case for war against Iraq.15 Tory MPs defied their leadership and voted  against the government’s policy.

It’s also worth noting that the same democratic process prevented a war with Syria in 2013, thanks to Ed Miliband rallying the opposition. Miliband repudiated the Iraq war, and his principled stance regarding Syria drew a clear line under the Blair era. (Another useful link –Ed Miliband Attacks Previous Labour Government In One Nation Speech To Fabian Society.)

2. Saddam Hussein, was internationally known for his use of chemical weapons in the 1980s against Iranian and Kurdish civilians during and after the Iran–Iraq War. This has been classified as an act of genocide. It was known in the 1980s that he pursued an extensive biological weapons program and a nuclear weapons program, though it’s unclear if nuclear bombs were built. Chemical, biological and nuclear weapons are all classified as weapons of mass destruction (WMDs). Both the US and the UK had sold weapon components to manufacture WMDs to Iraq previously, during the 80s, under the Thatcher government.

The chemical weapons which had already been deployed against the Kurds killed between 3,200 and 5,000 people and injured 7,000 to 10,000 more, most of them civilians. Thousands more died of complications, diseases, and birth defects in the years after the attack.

It still remains the largest chemical weapons attack directed against a civilian-populated area in history. The Halabja attack has been recognised by the UK, amongst other countries, as a separate event from the Anfal Genocide  – also known as “Chemical Ali” due to the use of chemical weapons, too – that was also conducted against the Kurdish people by the Iraqi regime under Saddam Hussein.

Furthermore, the New York Times and other sources reported recently that from 2004 to 2011, American and American-trained Iraqi troops repeatedly encountered, and were wounded by, chemical weapons remaining from years earlier during Saddam Hussein’s rule. American troops reported finding roughly 5,000 chemical warheads, shells or aviation bombs, according to interviews with dozens of participants, Iraqi and American officials, and heavily redacted intelligence documents obtained under the Freedom of Information Act. (See also: Iraq and weapons of mass destruction and Do Reports of WMD Found in Iraq Vindicate George W. Bush?) Thatcher’s arms deals with Saddam Hussein ultimately led to genocide and the first Gulf War (1990-91) under John Major.

(For the record, I strongly protested against the Iraq war, however, establishing the facts about how and why it happened is important. I don’t doubt that Persian Gulf oil resources, vested interests and profit incentives contributed significantly to the motivations of some, but I also think there is evidence that others genuinely believed that the war was founded on a humanitarian issue, and that’s regardless of my own perspective on the matter. I don’t agree, but if anything of value is to be learned, we have to take all of the contributing perspectives and debate into account.)

This is such a blatant lie. The vote, clearly stated on the Hansard record (see 13 Jan 2015: Column 738, Charter for Budget Responsibility), was pertaining strictly to the motion: “That the Charter for Budget Responsibility : Autumn Statement 2014 update, which was laid before this House on 15 December 2014, be approved.”  That isn’t about austerity.

The charter sets out that the Office of Budget Responsibility (OBR) will continue to monitor our fiscal rules. As we know, the  OBR has written extremely critical economic forecasts and analysis of austerity and the Tory spending cuts, clearly expressing the risks that the Chancellor is running and the scale of the damage his strategy will inflict on what remains of our public services.

It’s worth noting that whilst Ed Balls challenged Osborne, there was a curious silence from the  SNP and the Green Party. It was Ed Balls that challenged Osborne’s outrageous claims regarding “halving the deficit”- such a blatant lie, upon which even the exceedingly Conservative Spectator spluttered contempt. Or any of the other lies, some of which have already earned the Conservatives official rebukes from the Office for National Statistics. (See “bankruptcy lie” for example, on the hyperlinked article)

Furthermore, it’s about time that some MP’s, including Caroline Lucas, amongst others, recognised that there is a fundamental difference between the meaning of the word budget and the word austerity. Conflating the two for the purpose of politicking is unprincipled and dishonest.

It’s also worth noting from the same debate on the Hansard record:

Caroline Lucas: Does the Chancellor agree with me that with the feeble and inconsistent opposition coming from the Labour Front Bench, there is a very good reason for seeing the SNP, the Greens and Plaid as the real opposition on this issue because we are clear and consistent about the fact that austerity is not working?

Mr Osborne: That shows why we want the hon. Lady’s party in the TV debates.

Yes, I just bet they do, to collaborate with the Tories in attacking and undermining the Labour Party, not the Coalition, who are, after all, the ones responsible for introducing austerity measures. I don’t imagine for a moment that Osborne values further challenges to his outrageous claims of efficacy regarding austerity measures.

What is very evident when you read through this debate, is that Ed Balls and a couple of other Labour MPs presented the ONLY challenges to Osborne on this matter, just to reiterate this important point.

It’s also worth bearing in mind that Ed Miliband established the International ANTI-austerity Alliance. Back in 2012, Miliband said: “There is a grip of centre-right leadership on Europe which has said there’s only one way forward and that’s austerity, and you’ve got to have a decisive move away from that.” (See also: Labour leader Ed Miliband’s anti-austerity alliance will fight for the European dream.)

And why would Miliband be attending ANTI-austerity protests if he supported austerity?

Labour leader Ed Miliband speaks on stage to over 150,000 at Hyde Park, during the TUC organised protest against austerity measures in London

One of his main charges has been that the government is unfairly spreading the economic pain it deems necessary to fix the economy. Austerity cuts are the burden of the poorest.

Balls says that a decision to cut the top tax rate amounts to an unjustified “tax cut for millionaires”, whilst his party has been scathing of reform of the welfare system.

A point echoed many times by Ed Miliband, too. Accusing the government of making lower or no income groups pay for the recovery while shielding the rich is a claim which strikes a chord with some voters who view Cameron and his government – many of whom were educated at the same top fee-paying school – as out of touch.

Caroline Lucas was born in Malvern to Conservative parents and attended Malvern Girls’ College (which became Malvern St James in 2006), a fee-paying private school. Ed Miliband, on the other hand, went to a comprehensive school.

Polls also show that many voters approve of the government’s drive to rein in welfare costs and the government has demanded that Labour spell out what they would do to fix the economy. They have, but with understandable caution.

Labour’s careful, costed and evidence-based policies include: a Bankers’ Bonus Tax; a Mansion Tax; repeal of the Bedroom Tax; a reversal of the Pension Tax relief that the Tories gifted to millionaires; a reversal of the Tory Tax cut for Hedge Funds; freezing gas and electricity bills for every home a the UK for at least 20 months; the big energy firms will be split up and governed by a new tougher regulator to end overcharging; banning exploitative zero hour contracts; introduction of a living wage (already introduced by some Labour councils); a reversal of the £107,000 tax break that the Tories have given to the millionaires; reintroduction of the 50p tax; scrapping George Osborne’s “Shares for Rights” scheme that has opened up a tax loophole of £1 billion; ensuring Water Companies place the poorest households on a Social Tariff that makes it easier for them to pay their Water Bills; breaking up the banks and separating retail banking from investment banking; introduction of measures to prevent corporate tax avoidance, scrapping the Profit Tax Cut (Corporation Tax) that George Osborne has already announced for 2015 and many more.

These are not austerity measures. They are strongly redistributive policies.It’s difficult enough opposing the manipulative, lying authoritarian Conservative-led government, without having to constantly counter lies and smears from fringe parties claiming to be on the Left, whilst propping up the Right. Shame on them.

Many thanks to Robert Livingstone.