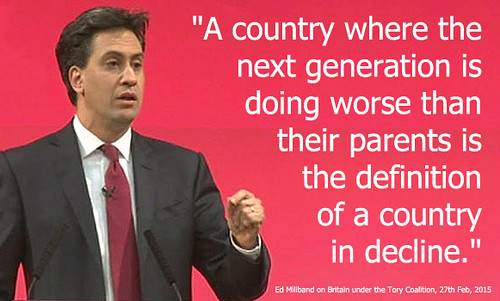 Originally published by the Fabian Society on Friday, 9 October 2009.

Perhaps the most audacious aspect of David Cameron’s speech to the Conservative Party conference this year was his attempt, while reconnecting with Thatcherism, also to project his party as the party of the poor.

Part of this strategy involves presenting Labour’s record on inequality and poverty as one of downright failure.

So what is the reality? What is Labour’s record on poverty and inequality?

The place to look for reliable data on this topic are the regular publications by the IFS. Reviewing them, these seem to be the key facts.

(1) Inequality increased enormously under the Conservatives. The Gini coefficient, a standard measure of inequality, rose from around 0.25 for income inequality in 1979 to around 0.34 in the early 1990s. In the IFS’s words: ‘The scale of this rise in inequality has been shown…to be unparalleled both historically and compared with changes taking place at the same time in most other developed countries’ (Brewer et al, 2008, p.27).

David Cameron joked about the way Labour refers to the ‘wicked Tories’. Well, there’s a reason for that. The last time they held power for a significant period of time they produced an ‘unparalleled’ increase in income inequality.

(3) But Labour has been consistently redistributive. IFS analyses show repeatedly, however, that Labour’s budgets have been consistently redistributive in their effects. That is to say, if you look at who has gained and lost from the changes to the tax-benefit system since 1996/7, the gains are biggest at the bottom, disappear in the middle, with losses at the top (Phillips, 2008).

(4) And Labour has (probably) reduced ‘counterfactual’ income inequality. To assess the impact of Labour’s policies since 1996/7, it is not enough to just look at where inequality is now compared to then. One has to ask: Where would inequality be now if we had just continued with the old tax-benefit system inherited from the Conservatives (with appropriate adjustments for inflation and the like)?

In Poverty and Inequality in the UK: 2007, IFS researchers calculated what the Gini for income inequality would be in 2005/6 under unchanged Conservative policies. The actual Gini in 2005/6 was 0.347. The ‘counterfactual’ Gini, reflecting unchanged Conservative policies, was 0.378 (Brewer et al, 2007, p.22). I have not managed to find a more recent calculation of this sort.

(5) Poverty, on most indicators, is lower for most groups than when Labour came to office. If we turn from inequality to poverty, the basic story seems to be, first, that on most measures, and for most groups (children, pensioners, etc.), poverty rates are lower than in 1996/7 (Brewer et al, 2009, pp.34-36). Accordingly, I would judge any broad-brush claim that ‘Poverty has increased under Labour’ or that ‘Labour has been bad for the poor’ as risible.

The usual headline measures of poverty focus on those with incomes less than 60% of the median. One Conservative line of attack has been to switch the attention to those in ‘severe’ poverty, defined as those with incomes less than 40% of the median. Analysis shows that ‘severe’ poverty rates have increased since 1996/7. However, the most recent IFS report on this subject argues that the data on those with incomes at this level is hard to interpret. Many of those in this group record expenditure well above their income level, suggesting that they might be on temporary low incomes and using savings or borrowing in expectation of higher income to maintain their living standards.

There might also be some recording error. The IFS researchers are thus sceptical that we should regard those in this group in general as really in ‘severe’ poverty (see Brewer et al, 2009, p.32).

(6) Labour’s third term has been bad for poverty reduction. Labour’s progress on reducing poverty went into reverse in its third term. Looking across the various groups (children, pensioners, etc.), poverty rates are higher now than they were in 2004/5 (Brewer et al, 2009, pp.32-34), though still lower for most groups than in 1996/7.

It should be noted, however, that IFS researchers expect child poverty to fall by 500-600,000 up to 2010/11, on the basis of existing policies and allowing for likely economic changes (Brewer, Browne, Joyce and Sutherland, 2009).

Labour has (1) pursued consistently redistributive policies – it has shifted resources from rich to poor – and these policies (2) have had some effect in reducing poverty and (3) have probably helped to check, without altogether preventing (let alone reversing), increased inequality.

To test what you think about this claim it helps to consider the ‘counterfactual’ exercise I mentioned above: If the Conservative approach – eschewing greater redistribution – had been applied since 1997, in place of Labour’s consistently redistributive approach, do you think poverty and/or inequality would be lower today or higher?

I think the question just about answers itself.

Cameron’s Gini and the hidden hierarchy of worth

Inequality has risen: Incomes increased for the richest last year, but fell for everyone else

Ed Miliband interview: The biggest issue we face is inequality

UK Wealth Divide widens, with inequality heading for “most unequal country in the developed world”

2 thoughts on “Labour’s excellent record on poverty and inequality”