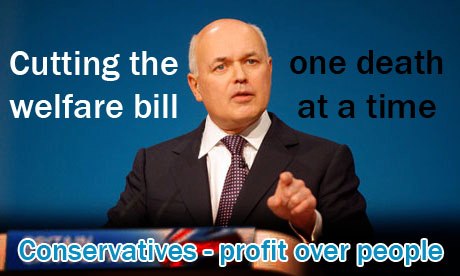 A disabled man killed himself as a direct result of being found “fit to work” by the government’s work capability assessment, a coroner has ruled. In a report to the Department of Work and Pensions, the coroner for Inner North London demanded it take action to prevent further deaths.

The coroner’s report on the death of Michael O’Sullivan  warns of the risk of more such deaths. Michael, a 60-year-old father of two from north London, killed himself at his home after being moved from employment support onto jobseekers allowance, despite providing reports from three doctors, including his GP, that he was suffering from long-term depression and agoraphobia and had been certified as unable to work.

The coroner said that Michael’s anxiety and depression were long-term problems, but the intense anxiety that triggered his suicide was caused by his (then) recent assessment by the DWP as being fit for work.

Previously, the loss or reduction of benefits have been cited as a factor in deaths and suicides of claimants by coroners. However it is believed to be the first time the work capacity assessment (WCA) process has been blamed directly for the death of a claimant. Iain Duncan Smith can no longer deny a causal link between benefit cuts and suicide following this landmark verdict.

Michael O’Sullivan died on 24 September 2013, but his case came to light after Disability News Service reported the story.

In a document marked “sensitive”, Mary Hassell, the coroner for Inner North London, told the DWP she concluded the “trigger” for his suicide was his “fit for work” assessment and detailed her concerns over future deaths.

The report, known as a Prevention of Future Deaths or Regulation 28 report, Hassell wrote:

“I found the trigger for Mr O’Sullivan’s suicide was his recent assessment by a DWP doctor as being fit for work. During the course of the inquest, the evidence revealed matters giving rise to concerns. In my opinion, there is a risk that future deaths will occur unless action is taken.”

At an inquest into his death last year, Hassell said that O’ Sullivan was suffering from long-term anxiety and depression “but the intense anxiety which triggered his suicide was caused by his recent assessment by the Department of Work and Pensions [benefits agency] as being fit for work and his view of the likely consequences of that”.

The inquest heard that in his assessment, the Department of Work and Pensions (DWP) assessing doctor, a former orthopaedic surgeon, did not factor in the views of any of the three doctors treating O’Sullivan. She also said that he was never asked about suicidal thoughts, despite writing them down in a DWP questionnaire.

Under a heading marked “matters of concern” in her report to the DWP, Hassell said the assessing doctor did not take into account the view of any of the three doctors who were treating O’Sullivan. She said:

“However, the ultimate decision maker (who is not, I understand, medically qualified) did not request and so did not see any reports or letters from Mr O’Sullivan’s general practitioner (who had assessed him as being unfit for work), his psychiatrist or his clinical psychologist.

In my opinion, action should be taken to prevent future deaths and I believe that you and Jobcentre Plus have the power to take such action.”

In its 16-page response to the coroner’s report, the DWP admitted it had got it wrong. It said that its policy to request further evidence when a claimant mentions suicide on claim forms was “regrettably not followed in this case”.

It also said the WCA process remained under “continual review and development”, including through five independent reviews, and concluded:

“We have noted the issues in this case and will continue to monitor our policies around assessment of people with mental health problems while we await the outcome of related litigation.”

The Department of Work and Pensions has conducted at least 60 internal investigations into suicides linked to benefit changes since 2012. Last month, DWP data showed the equivalent of nearly 90 people died every month after being declared fit for work and losing their benefits between 2011 and 2014.

A Department of Work and Pensions spokesman said last Monday that improvements have been made to the system since the coroner’s report. The spokesman said:

“Following reforms to the work capability assessment, which was introduced in 2008, people are getting more tailored support to return to work instead of being written off on long-term sickness benefits as happened too often in the past.”

People were not dying in their thousands before the introduction of the Tory austerity measures. The so-called “reforms” to the work capability test have been going on according to the DWP for the past five years, yet we see no improvement in outcomes.

Reducing a response regarding a suicide brought about by departmental and wider negligence to petty political point scoring, casualising tragic, needless and premature deaths that are linked with the welfare “reforms” and Conservative small state fetishism, is an outrage. This is not an acceptable or appropriate response from the DWP.

This tragic case along with the recorded, detailed evidence of many others, has been presented to the government by campaigners, opposition MPs, and by the parliamentary work and pensions committee as part of their inquiries related to the reforms, clearly demonstrating that government policies are causing harm to people. This case alone ought to have triggered an independent inquiry regarding the impact of the “reforms”, but instead we are presented with persistent and aggressive denials of a causal link between an increase in premature mortality and Tory policies, such as the non-medical WCA, (which was  re-designed by the Tories when they re-contracted Atos to deny people their entitlement to benefits,) without any grounds for those denials whatsoever.

This is a government that has abdicated its responsibility – its democratic, ethical, moral and legal duties towards those people who need the most support. Furthermore, by modelling such callous indifference towards the social groups that they have also stigmatised and scapegoated, this government are also pushing public moral and rational boundaries, too,  leading to desensitisation, and a normalisation of prejudice, discrimination and of a government’s actions that are designed to intentionally punish and coerce unemployed, sick and disabled people rather than support them.

We must challenge that and keep pushing back, because the alternative –  bystander apathy – is untenable. To do nothing is to give a silent consent to a continuing and devastating cumulative policy impact on the poorest and weakest citizens that is tantamount to eugenics, albeit by stealth.

8 thoughts on “Fit for work assessment was trigger for suicide, coroner says”