Austerity was never about what works or what is needed. It’s about traditional Tory class-based prejudices. Austerity is simply a front for policies that are entirely founded on Tory ideology, which is  all about handouts to the wealthy that are funded by the poor.

David Cameron has often denied claims that his party has overseen a rapid rise in inequality. In fact last year, Cameron said that inequality is at its lowest level since 1986. I really thought I’d misheard him.

This wasn’t the first time Cameron has used this lie. We have a government that provides disproportionate and growing returns to the already wealthy, whilst imposing austerity cuts on the very poorest. How can such a government possibly claim that inequality is falling, when inequality is so fundamental to their ideology and when social inequalities are extended and perpetuated by all of their policies? It seems that the standard measure of inequality has been used to mislead us into thinking that the economy is far more “inclusive’ than it is. Yet the UK is one of the wealthiest nations in the world.

Earlier this year a published report by the Dublin-based Foundation for the Improvement of Living and Working Conditions (Eurofound) stated that the UK has become the most unequal country in Europe, on the basis of income distribution and wages.

A year ago, the Organisation for Economic Cooperation and Development (OECD) published research that confirmed what most of us already knew: that income inequality actually stifles economic growth in some of the world’s wealthiest countries, whilst the redistribution of wealth via taxes and benefits encourages growth. That debunks one of the nastiest Tory myths. Having long been advocates and engineers of social inequality, implying a mythological  “trickle down” as a justification, and hankering after a savage, axe-wielding minarchism, chopping away at our civilising public services and institutions, they are now officially a cult of vicious cranks. The problem is that the general public don’t pay much attention to research like this. They really ought to.

Conservatism is centred around the preservation of traditional social hierarchy and inequality. Tories see this, erroneously, as an essential element for expanding national economic opportunity. But never equal opportunity.

Conservatives think that civilised society requires imposed order, control and clearly defined classes, with each person aware of their rigidly defined “place” in the social order. Conservatism is a gate-keeping exercise geared towards economic discrimination and preventing social mobility for the vast majority. Inequality is so clearly embedded in policies – which are written statements of political intent.

According to the annual Family Spending Review for 2014, published by  the Office for National Statistics (ONS), the richest 1 per cent of the population have as much wealth as the poorest 57 per cent combined.  Wealth inequality has increased since 2012. The richest 10 per cent own half the country’s wealth.

Charities have urged the government to address Britain’s shameful and growing inequality after the figures published this week show that the country’s richest 10 per cent spend as much on alcohol and cigarettes in a week as the poorest spend on gas and electricity. That turns the dominant “feckless” poor narrative in the media on its head. Poverty doesn’t happen because people have poor budgeting skills. Poverty happens because people don’t have enough money to meet their basic needs.

By 2011/12, the poorest fifth of households spent 29 per cent of their disposable income on indirect taxes, compared with 14 per cent paid by the richest fifth. All told, the poorest households pay 37 per cent of their gross income in direct and indirect taxes. In other words, the single biggest expenditure for people in poverty is tax. It is, at the very least, morally unjustifiable to be taxing the poor at such a rate. The most important thing the government can do to help the poor is to stop taking their money.

David Cameron did once tell a truth, though it was an inadvertent Freudian-styled slip. He said: “We are raising more money for the rich.” Yes. From where, I wonder? 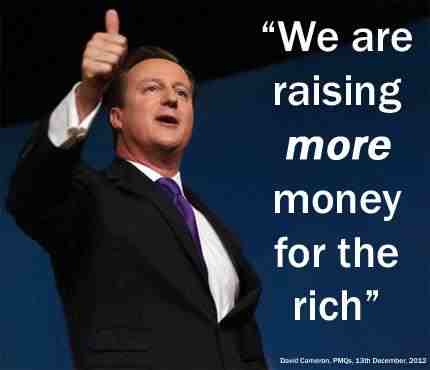 5 thoughts on “UK has shameful but unsurprising levels of inequality”